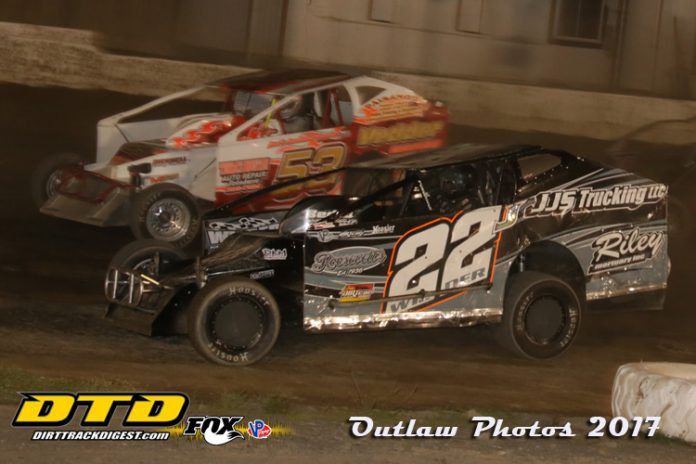 FONDA, NY – So what does opening day at the local race track mean to you? To me as a child it meant sitting on the top row of the turn four bleachers watching the race cars come into the fairgrounds on their open trailers, new paint schemes making it hard at times to figure out just who the drivers were.

Now with the use of enclosed trailers it makes it even harder to identify cars and drivers when they drive around the back road of the grandstand area but the excitement is still there and it always will be, and always should be for any race fan.

Each sport has their own unique way of promoting opening day, this year in 2018, the Fonda Speedway has many drivers returning to competition along with some new ones trying to add their name to the all-time win lists at the historic “Track of Champions” Fonda Speedway as it begins its 65th season of competition.

New drivers competing at Fonda in 2018 will include Demetrious Drellos and Nick Anatriello. Drellos will be competing in a brand new 2018 Bicknell car owned by Bill & Erik Nelson of Nelson Motorsports. The car will be powered by a John Grant big block as Drellos will try to get a win at the “Track of Champions” after a breakthrough season in 2017 at both the Albany Saratoga and Lebanon Valley Speedway’s where he was a feature winner at both race tracks in the families self-owned #111 car.

The Nelson and Drellos names are already in the history books at Fonda as Bill Nelson drag raced there before switching over to stock cars in 1968. Erik Nelson has one open sportsman win at Fonda (7/30/2005) to go along with many starts in the modified division in the family owned car #85. Erik started racing in the late 80’s at Fonda in the street stock division. According to Bill Nelson, the #85NY was mandated to him by NASCAR back in the day when he started his racing career and has stuck with the family ever since.

According to the book FONDA!, the Drellos name came into play at Fonda back in 1959 when Chris Drellos (Demetrious’ grandfather) bought out a race team that was formed originally by Kenneth Hanson and Henry Caputo. Drivers in the Drellos three car team #11, #111, & #111A through the years included Jeep Herbert, Buck Holiday, Paul Marshall, Kenny Shoemaker, and Pete Corey. During the off season of 1963-1964 Drellos sold out ending his ownership of the three car team.

According to an Anatriello Racing News release back in mid-March, Nick Anatriello out of Schaghticoke, NY will be racing at the Fonda Speedway as a regular in the modified division in 2018. An off season collaboration with Branich Motorsports out of Williamson, NY has brought a new motor program to the table for the Anatriello Racing Team and that along with support from Dick Hick’s of Hico Fabrications in Clifton Park, NY; Zappone Chrysler Plymouth Dodge and Jeep out of Clifton Park, NY and Granville, NY; Show Off Equine Events; Snell Septic Services; Rosendahl Guernsey Farm; and TJ Paquette Motorsports have raised the teams Teo car to a more competitive level.

Returning to full time competition at Fonda in 2018 include Jeff Rockefeller who has one career modified feature victory at the “Track of Champions back on 6/21/2014; Darwin Greene who has two career modified wins at Fonda back on 9/17/2016 and 7/29/2017 and his brother in law Kenny Sparks who were rumored to be racing elsewhere this season; Steve Akers who has had past success at Fonda as a two time open sportsman feature winner back in 8/8/1998 and 5/19/2001 along with a Small Block Challenge Series Point Championship at Fonda back in 2003; and Steve Wagoner who has made a few starts in the modified division at Fonda in the past.

Returning as a sponsor for the 602 sportsman division will be A-Verdi Storage Containers and Sampson Motor Car of Amsterdam, NY will be sponsoring a pace car for the “Track of Champions” in 2018! Returning sponsors according to the track website include Hoosier Racing Tire, Hunt’s Machine, VP Racing Fuels, and Rock Auto.

The 2018 season opener can’t come soon enough and will take place on Saturday, April 21 at 4:00 p.m. with the running of the annual Ice Jam event featuring a 50-lap modified event paying $5,500 to the winner. Last year in 2017, Justin Boehler was the race winner for his first career win in the modified division at Fonda. All other divisions will also be in action on Saturday, April 21, as points will begin for all classes as the chase to the 2018-point championships begins.

For more announcements regarding the “Track of Champions” Fonda Speedway you can go to their website www.newfondaspeedway.com or you can also go to the Fonda Speedway Facebook page.