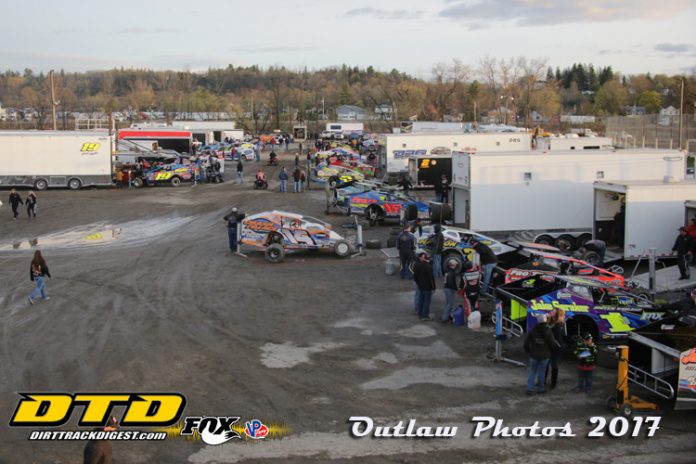 FONDA, NY – When the “Track of Champions” Fonda Speedway opens its gates for the 2018 season opener on Saturday, April 21 another chapter will be started in the history books of the Montgomery County Fairgrounds facility. The 65th consecutive season of racing at the historic facility begins at 4:00 p.m. with the annual 50-lap Ice Jam event for the modifieds paying $5,500 to win. All other regular divisions will also be in action as points will also begin in all classes towards the 2018 track titles.

Last year history was made in the Ice Jam event when Justin Boehler went to victory lane for his first career win in the modified division at Fonda. Unfortunately, for Boehler he was recently forced to announce his retirement from racing due to a back injury, which his doctor is attempting to correct so that it does not affect his future outside of racing.

Below is a write up about last year’s event.

Billy Decker led at the drop of the green flag but it was third place starter Stewart Friesen who got by both Bobby Varin and Decker to lead lap one. Two consecutive restarts at the completion of lap one, the first for Cass Bennett and Brandon Walters who ended up in the turn one wall, and the second on the Delaware restart for Scott Huber who lost a tire on the backstretch, slowed the event but Friesen was able to maintain the lead both times.


When the race did go green again Friesen continued to lead with Varin, Tim Fuller, Boehler, and Decker completing the top five and by lap 10 Friesen was already in lap traffic. Friesen was setting such a blistering pace that he was lapping cars in the top 10 by the 20th lap while Varin slowed in turn two on lap 22 while running second bringing out the caution.

Through numerous restarts during the next few laps, Boehler made his way back to the front after falling back to fifth, gaining positions on each restart up to the second spot on lap 31. Boehler’s lap times were getting faster as the race went on and by lap 38 Boehler’s lap times were actually faster than the leader. Coming out of turn four on lap 44 the leading car of Friesen blew a right rear tire, bringing out the caution and handing the lead over to Boehler.

Fuller was the new second place car on the restart with Wilder behind them in third with the final caution of the event coming out on lap 47 for defending modified track champion Ronnie Johnson who broke a rear end in turn two and slowed to bring out the yellow flag and one final restart.

When the green flag flew again, Fuller pressured Boehler for the top spot during the final three laps, but Boehler maintained his composure and ran his line to perfection to gain his first career modified win at the “Track of Champions” in the Pro Tech Scale Service #50J.

Victory lane was full of family members, friends, crew members, and sponsors who celebrated the win along with Justin perhaps the most special moment being the hug that his parents Craig and Marie shared with each other. Marie also went around to everyone and hugged them as well for being part of their son’s special evening.

“I don’t think there are any words to describe this,” Boehler said on checkerboard square after the win when asked what that final lap felt like. “After running here at Fonda for a long time the last lap was a little overwhelming thinking about how special this could be.”

“On the final lap I had to tell myself that I’m the only one on the track, that it was just warm-ups, and stay focused,” Boehler said. “I have to thank my wife, my mom and dad because I couldn’t do this without them, and everyone who works on this race car. I love them all. I also have to thank RJ (Ronnie Johnson) and his crew because they were a big help to me as well.”

So come and join in on the excitement of opening day 2018 at the “Track of Champions” Fonda Speedway and witness the history of the track for yourself. More information is always available online at www.newfondaspeedway.com