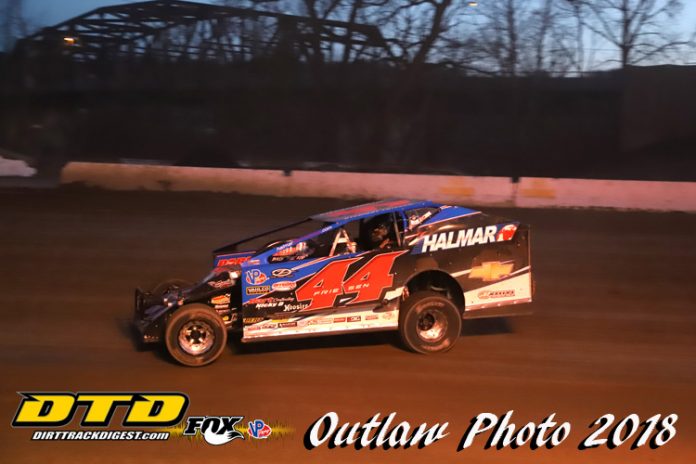 FONDA, NY – Last weekend, Stewart Friesen picked up a $7,500 win at Grandview, followed by a $6,000 check at Georgetown on Thursday. Might as well make it a triple, as Friesen dominated Fonda’s Ice Jam 50 for another cool $5,500 payday for the red-hot driver.

The win was Friesen’s third opening day win at the track, and none came in as dominant fashion as today. The only time Friesen was not out front was the first thirty feet of his heat race, where he started third.

“It’s awesome, just so awesome. We had a nice sunny day, a great day for a race, and I have to thank everyone for coming out,” an obviously happy Friesen said. “These kids on the other side of the river (his team) have been working really hard for the last three years on these race cars and we got something pretty special right now.”

Friesen started the Fonda season in familiar territory, grabbing the lead in the 50-lap affair from his pole starting spot. Friesen built up a quick two-second lead over Josh Hohenforst before Kenny Sparks erased it with a spin with four laps in.


The short run before the next caution on lap 11 was more of the same, with Friesen jumping out to another big lead over Hohenforst and Mike Mahaney.

Cody Bleau’s spin brought the field back to Friesen on lap 16, putting Hohenforst on Friesen’s door for the restart. Hohenforst got a good jump, and was nearly able to clear Friesen for the lead, pinning Friesen down in turns one and two.

Danny Varin appeared to be the only car capable of passing up high, rocketing to third on the restart. Not done yet, Varin pulled three wide with Hohenforst and Friesen for the lead down the backstetch, but Friesen hung on. However, Varin got past Hohenforst for second.

That’s as close as Varin could get for some time, as Friesen opened up another big lead, gapping Varin by three seconds at halfway. Jeff Rockefeller spun with 30 laps in, bringing Varin to Friesen’s door, and Bobby Varin to third and to Friesen’s bumper.

Neither Varin could hang with Friesen, as the Halmar #44 darted away again. Another caution on lap 37 set round two of that same scenario, and the same result with Friesen driving off once more.

A caution for Sparks spinning with two laps remaining wiped out a full straightaway and then some lead for Friesen, but two final perfect laps netted him his third big win in seven days and a $5,500 check. Danny Varin claimed second over Bobby Varin, followed by Danny Johnson and Josh Hohenforst.