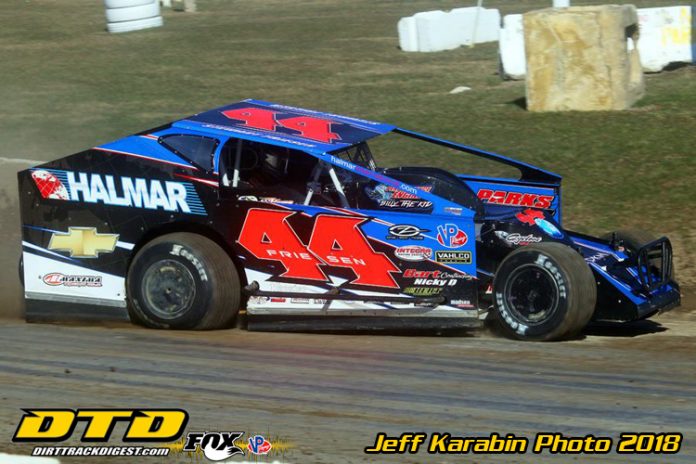 Fonda, NY – Stewart Friesen has been successful in winning big money dirt track racing events in recent weeks starting with the Bruce Rogers Memorial event at Grandview worth $7,500 followed by the Battle of the Bay at Georgetown worth $6,111. Now he can add to that list the “Ice Jam” at the Fonda Speedway which he won on Saturday evening worth $5,500 for the win.

Friesen started on the pole after winning heat race number one and was only passed for the lead one time during the 50-lap event which only lasted two turns before he had the lead back. Friesen’s other two wins in the “Ice Jam” event came back in 2015 & 2016. It was also Friesen’s 48th career win at the “Track of Champions” in just eight winning seasons!

A great crowd braved the cool temperatures once the sun went down to enjoy the evenings racing action and to see Stewart’s son Parker hold the checkered flag in victory lane for his dad as they proudly stood in front of the winning Halmar #44 DKM race car for the victory lane interview.

“Awesome”, Friesen told Dan Haslun in victory lane. “Thanks to all the fans that came out on this nice sunny day.”

Friesen took the lead at the drop of Joe Kriss’ green flag with outside front row starter Josh Hohenforst close behind. The first of a total of seven yellow flags in the 50-lap event flew on lap four with Friesen choosing the inside lane for the restart. As Hohenforst continued in the second position on the restart, there was a change in the third place car as Mike Mahaney got by Bobby Varin for the spot with Friesen out to a straightaway lead by lap eight.

Ninth place starter Danny Varin was the only driver who was giving the outside groove a try and he was successful at it too as on lap 14 he got by both Danny Johnson and Mahaney for the for the fourth spot with a three wide move. A lap 16 restart was the only time Friesen was passed for the lead although it was a brief lead at that.

On the restart, Hohenforst got the jump out of turn four and came down in front of Friesen going into turn one to lead the event. Coming out of turn two Friesen was about as far inside the track as you could go and got alongside Hohenforst to take the lead back. While all that was happening Danny Varin made it three wide on the outside of both Friesen and Hohenforst on the backstretch and took the second position from Hohenforst going into turn three.

Friesen was in lap traffic at the halfway point with the top five at that time consisting of Friesen, Danny Varin, Hohenforst, Bobby Varin, and seventh place starter Danny Johnson. On a restart on lap 30, Bobby Varin got by Hohenforst for the third position with Hohenforst continuing to lose spots as on lap 37 both Mahaney and Johnson got by him for the fourth and fifth positions.

Friesen pulled away again with 10 laps to go and with five laps to go was in lap traffic again as it took two laps for the leader to get by the lap car of Kenny Sparks. Sparks brought out the next yellow when he spun in turn two setting up a green, white, checkered finish. The final caution came on the restart with Shaun Pangman spinning this time setting up another green, white, checkered finish.

On the final restart, Hohenforst moved back into the top five but it was Friesen who crossed under the checkered flag first followed by Danny Varin, Bobby Varin, Danny Johnson, and Hohenforst.

“Those guys across the river here in Fonda (where the DKM shop is located) Kyle (Hoffman), Dave (Constantino), and Erik (Mack) have been working their asses off on these cars along with Tom Conroy who works on my cars every day,” Friesen said in victory lane. “We have something really special here,”

It took three tries to get the 25-lap sportsman feature going but when it finally did pole position starter Ray Zemken was the race leader. Zemken stretched out his lead early on over Brian Borst but by lap 12 Borst started to reel in the leader. The leader was in lap traffic on lap 13 with the top five at the halfway point consisting of Zemken, Borst, fourth place starter Nick Scavia, Robert Bublak, and eighth place starter Chad Edwards.

On lap 15 the final caution of the event came out after the lap car of Kathy Bellen was spun by the leader in turn four. Bellen showed her displeasure with Zemken in turn one as she drove alongside of the leader and made “slight” contact with his car. Zemken had no damage though and led on the restart with Scavia the new second place car after getting by Borst for the position.

Scavia stayed close to the leader’s rear bumper during the remaining laps and with two laps to go in turn three Zemken left room on the inside and Scavia took advantage of it to get by for the lead. Scavia led to the checkered flag for his second career win in the North Country Electrical LLC. Sponsored #17 over Zemken, Bublak, Edwards, and Borst who did a great job in his first race back in many years after racing in the former “open” sportsman years ago.

“I was tight right out of the gate tonight and wasn’t too confident we could figure it out before the feature but we did,” Scavia said in victory lane. “He (Zemken) left me a gap on the inside of turn three and I was able to get by for the lead.”

Pole sitter Luke Horning led the 20-lap pro stock feature at the drop of the green flag but going into turn one got sideways and spun the car with the field bearing down on him from behind bringing out the early caution. Only one car made contact with Horning’s car but there was enough damage that he was done for the evening.

On the original restart, Devon Camenga was the race leader with fourth place starter and defending track champion Kenny Gates behind in second. Coming down to complete lap one on the inside of turn four, Gates took the lead away from Camenga with third row starters Ivan Joslin and Jim Normoyle also getting by for the second and third spots respectively.

Normoyle was the new second place car on lap four after getting by Joslin with Gates out to a straightaway lead by lap seven. Eighth place starter Cassidy Wilson got by Joslin for the third position on lap seven and at the hallway point the top five consisted of Gates, Normoyle, Wilson, Joslin, and AJ Walters.

The second caution in the event came out on lap 12 for Randy Cosselman who spun in turn two and on the restart 11th place starter Josh Coonradt got by Joslin for the fourth position. On the final lap Coonradt spun in turn two with the checkered and yellow flags coming out at that point with Gates taking his 73rd career win in the division at Fonda over Normoyle, Wilson, Walters, and seventh place starter Reuben Kennedy Jr.

“You had to hook the bottom tonight and I’m pretty good at that here at Fonda,” Gates told Dan Haslun in victory lane. “The track was very tricky tonight, typical spring track conditions, so I feel lucky to be here.”

The four car street stock feature started and ended with Cliff Haslun leading from the pole and leading every lap of the eight lap event to win the fourth feature of his career in the division over Jason Samrov, defending track champion Johnny Young, and Scott Gauthier.

In his first actual race in a stock car, 12 year old Derrick McGrew Jr. led every lap of the limited sportsman feature for his first career win at the “Track of Champions”. With experience in both Go-Karts and Slingshots the youngster looked good in his debut and joins his father Derrick McGrew as a feature winner at Fonda as Derrick McGrew Sr. has one victory in both the “open” sportsman and “crate” sportsman divisions at the Montgomery County Fairgrounds facility.

Next Saturday, April 28 at Fonda will feature a racing program consisting of the CRSA Sprint cars along with all other divisions in action as well with a starting time of 7:00 p.m. A driver meet and greet is also on the schedule giving the fans an opportunity to see the cars up close and personal on the frontstretch of the track and get autographs and pictures of their favorite drivers.

For more information about the “Track of Champions” please go to their website www.newfondaspeedway.com