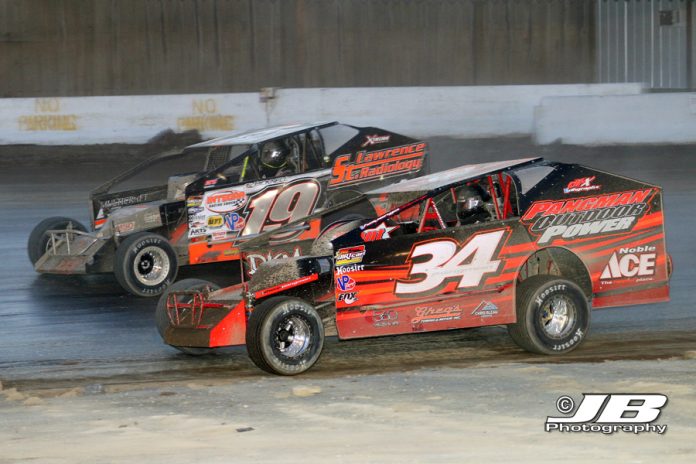 FONDA, NY – After the rainout last Saturday evening, The “Track of Champions” Fonda Speedway will be back in action this Saturday, May 5 with a regular racing program consisting of all regular divisions including the modifieds, sportsman, pro stocks, and street stocks sponsored by VP Racing Small Engine Fuels. Starting time will be 7:00 p.m. There will also be a Meet & Greet giving the fans a chance to see their favorite drivers up close and personal.

The Driver Meet & Greet will take place on the front straightaway at 6:00 p.m. on Saturday evening. The Meet & Greet is a great time for fans to go down on the front straightaway to meet their favorite drivers and their crews, see the racecars up close, and get an autograph or a picture or both! A definite special moment for young fans and adults as well who get to meet the drivers they admire, their heroes perhaps that compete at Fonda on a weekly basis.

Two weeks ago at Fonda on opening night, Stewart Friesen captured his 48th career victory at the historic fairgrounds track in his DKM Cyclone chassis #44, tying him for seventh on the all-time win list with Mike Romano. Friesen’s first win ever win at Fonda came back on 7/27/2010. Nick Scavia was the sportsman feature winner on opening night after winning for the second time in his career at Fonda while Kenny Gates continued his success in the pro stock division with his 73rd career win which tops the all-time win list in that division. Cliff Haslun proved that his second place finish in points in 2017 was no fluke and captured his fourth career Fonda Speedway win in the street stock division.

A bit of history was also made when 12-year-old Derrick McGrew Jr., who was racing in his first actual stock car race, led every lap of the limited sportsman feature for his first career win at the “Track of Champions”. With experience in both Go-Karts and Slingshots the youngster looked good in his debut and joins his father Derrick McGrew as a feature winner at Fonda as Derrick McGrew Sr. has one victory in both the “open” sportsman and “crate” sportsman divisions at the Montgomery County Fairgrounds facility.


So come, join us at the “Track of Champions” for another action packed racing program and for the Meet & Greet as well, and see what driver could possibly be next to add their name to the Fonda Speedway history books! For more information about the track, you can go to their official website www.newfondaspedway.com and please like the Fonda Speedway on Facebook as well!