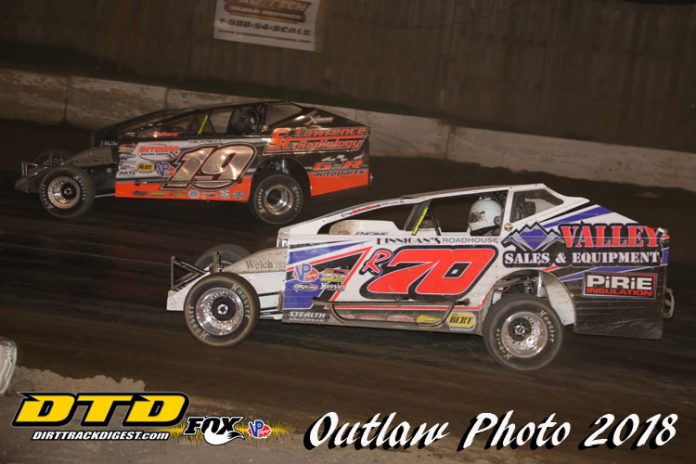 FONDA, NY – A very exciting modified feature was witnessed by the crowd at the “Track of Champions” Fonda Speedway on Saturday evening between two great drivers who were inside and outside of lap cars, two and three wide at times, as they looked to add a victory to their racing resumes.

Those two drivers were Tim Fuller and Stewart Friesen who started mid pack on the 26 car starting grid and put on a clinic as they passed cars at will on the outside to get to the front and duke it out for the win. At the checkered flag it was defending track champion Fuller who got his second career win at Fonda in the St. Lawrence Radiology #19 Bicknell car on VP Racing Small Engine Fuels Night.

When Mike Mallett told Fuller in victory lane that it was Friesen who was trailing him for the win for the last half of the race Fuller replied with a smile “when wouldn’t he be.” Mallett also asked Fuller whether after one win last year if this early season win was setting him up for more in 2018 to which Fuller replied “I think we’ll be alright.”

After winning heat race number one, Bobby Varin started on the pole in the heads up start format with Rocky Warner alongside with Varin getting the early race lead. Fuller and Friesen started the event in the 12th and 15th starting positions respectively and by the time the first caution of the event flew on lap three they had already used the outside groove to move up to the sixth and seventh positions respectively.


Fuller made a great move on the restart to get by three cars up to third before another caution was out on the next lap. On this restart Fuller moved into the second position while Friesen was right behind him in the third spot after getting by both Danny Varin and Jeremy Wilder for the position. Fuller pulled in on race leader Bobby Varin on lap nine and one lap later used an outside move in turn four to take the lead away.

The outside groove got both Fuller and Friesen to the front but once they got involved in lap traffic it was every man for himself as they did whatever they could to advance by the back markers. Friesen used a three wide move in turn two down the middle of Bobby Varin and a lap car to get the second spot and from that point on it was a game of cat and mouse as Fuller and Friesen put on a great show for the fans.

At the halfway point the top five consisted of Fuller, Friesen, Bobby Varin, Wilder, and Danny Varin with Friesen trying everything he could to keep pace with the leader. Friesen had just enough room between a lap car and the front stretch wall to advance ahead and keep up with Fuller but when Friesen bobbled slightly on the back stretch with only three laps to go it looked like Fuller would pull away to the win.

But the never ending lap traffic kept the two close to the end with Fuller gaining his first victory of the season and opening day “Ice Jam” winner Friesen having to settle for second. Bobby Varin, Wilder, and Danny Varin completed the top five in the 30-lap event.

It took two tries to get the caution plagued 25-lap sportsman feature started with pole position starter Tony Farone leading on both of those attempts with Brian Pessolano just behind in second.

Another caution on lap three slowed the field for a “it’s racing” type incident when Mark Mortensen, Brian Calabrese, and Chad Edwards were three wide on the backstretch racing for positions just inside the top 10. Contact was made between Mortensen and Calabrese as the two ran out of racing room going into turn three with Edwards still on the outside and three wide. By the time the cars entered turn four, Mortensen had hit one of the implement tires on the inside of the turn and came to a stop while Calabrese had damage to his car as well.

Calabrese was done for the evening while Mortensen was in and out of the “hot pit” trying to make repairs to his car.

On a lap six restart, seventh place starter Tim Hartman Jr. was the new third place car as Pessolano was making the outside work for him, trying all that he could to get around the outside of the leader. On lap 10, Pessolano did just that as he swept around the outside of Farone for the lead coming out of turn four with Farone doing a 360 degree spin to bring out the caution at that point as it looked like he was trying to avoid making contact with Pessolano. Farone was forced to restart at the rear of the field as he was the reason for the caution.

On this restart, Hartman Jr. was the new second place car and he was able to get by for the lead when the green flag dropped again with fifth place starter Nick Scavia now in the mix for the race lead as he was the new third place car. Pessolano and Scavia swapped the second position twice in the closing laps and with two laps to go Hartman Jr., Scavia, and Pessolano were in a three way battle for the race win.

“I didn’t think that we were going to do this tonight but I knew that if I drew well that I would have a good shot,” Hartman told Dan Haslun in victory lane. “We came here tonight with this brand new car just to get some notes for the King of Dirt (KOD) race here next week. I have to thank my car owner Mike Parillo, along with my mom and dad and my crew for everything that they do for me.”

After winning pro stock heat race number one, Kenny Gates started the 20-lap feature on the pole and took the lead at the drop of the green flag. Gates never looked back, led every lap of the event through numerous caution flags, and was never really seriously challenged throughout the entire race.

At the halfway point in the event, Gates led over Jim Normoyle, Josh Coonradt, Luke Horning, and AJ Walters with Coonradt the new second place car on lap 13 when Normoyle had to pit for a flat left rear tire. Coonradt tried to stay with the leader throughout the remainder of the event but wasn’t able to do so with Gates winning his 74th career event in convincing fashion over Coonradt, Ivan Joslin, Walters, and Horning who came from the rear after bringing out one of the caution flags on lap 13.

“It is nerve wrecking to start on the pole and not have the driver screw it up,” Gates said after the victory.

The 15-lap street stock feature saw two drivers inherit the lead on two different occasions after the other one spun out or slowed to bring out the caution. First to lead was defending track champion Johnny Young who led the first two laps before spinning in turn one to bring out the first caution.

Jason Samrov led on the restart but it was only for one lap after he slowed in turn one on lap four to bring out the second caution of the event. Young inherited the lead back at that point and survived a strong challenge from Cliff Haslun to take his ninth career win in the division over Haslun, Scott Gauthier, Bill Yager, Samrov, Joey Wilson, and Steven Young who did not start the event.

Travis Billington started the limited sportsman feature in the fifth position but at the completion of lap one he was already the race leader. Billington led the remaining laps for the win over Larry Niemiec, Dylan Eldred, Derrick McGrew Jr., Michael McCallion, and Jason Baker.

Next Saturday, May 12 the Fonda Speedway will honor mothers with “Mother’s Day Starters” along with the King of Dirt (KOD) Sportsman Series event and all other divisions with a starting time of 7:00 p.m.