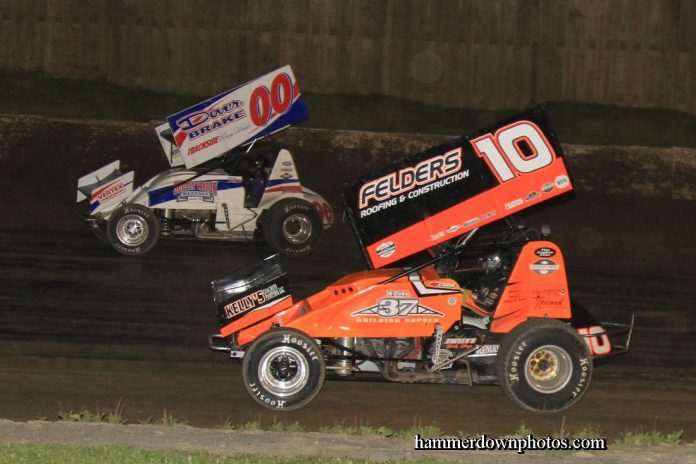 FONDA, NY –  Last year’s winningest driver on the Lucas Oil Empire Super Sprint (ESS) circuit, Danny Varin needed to lap 24 to wrestle the lead away from his father Bobby Varin and pick up his first victory of the 2018 season. His win came at his hometown track, the Fonda Speedway which hosted the annual Earl Halaquist Memorial.

The driver of the Dover Brake #00 took home $2,160 which also paid points for the NAPA Auto Parts US Tour and was the first event on the E&V Energy I90/I81 Series.  The win was his 10th of his short ESS career and now marks three in a row at the famed track along the Mohawk River.

For the younger Varin, the way the night started he didn’t think holding the checkered flag was an option. Not completing a lap in timed warmups to finishing fourth in his heat which put him in the dash and eventually starting the A-Main in 14th.

“We just seemed to have a black cloud hanging over us and we can’t seem to shake it,” Varin went on, “We have fast race cars but can’t seem to finish races off. The motor has some problems as we aren’t quite sure what is the issue and it even laid down on the last two laps tonight.”

But, given all the issues at the night’s start, his choosing of lanes and coming through the field was short of amazing, “The top was fast but then it got way out there so I was able to also roll the bottom real well to make some passes,” he continued. “The car really wasn’t that great tonight, it felt like it was going to spin out or it was pushing but we just kept going at it.”


As laps clicked on and lapped traffic was figuring into the outcome.  Chuck Hebing who lead from lap 13 was passed by Bobby Varin on lap 20 and then Danny made his move to take the top spot officially on lap 24.

“It took me a while to get a rhythm after a start.  I was tracking him (Bobby) down and try to get past but it just wasn’t working,” said the Fonda, NY resident on the pass for the win, “With the top getting so far out so I went to the bottom, hit my marks and I got a couple of good laps to get by.”

Right afterwards Danny was asked if there was a little more motivation to beat his dad and he simply summed it up.  “I really don’t care who it is, we are here to win. But it sure was nice to see double zero one-two for Dave (Cruickshank).”

For Bobby, he was mentioning that this might have been one that got away.  “I thought I had it, thought I had the car to beat but my engine got up to 270 and I lost power there at the end,” he continued, “So I had to roll out of the throttle and try to let it breathe.

“I could have pushed it hard to the end and we might have gotten the win but we also are a small team with no spares,” said the veteran, “My right rear tire is actually a used tire from Danny with a plug in it! We have some good stuff but we also have to do what we can to make sure we can get to the next race.”

Hebing swept by Josh Pieniazek at the halfway and looked to be well on his way to taking the $500 Triple Crown Bonus for setting fast time and winning his heat.  But he told about his car losing some speed at the end.

“My tires started to go away there at the end and we got passed by two guys that just have so many laps here,” said the two-time ESS champ, “I think they knew what to do to make sure they were a little bit stronger there at the end.”

Coleman Gulick used the high outside lane all race to come from 16th to fourth at the end with Steve Poirier taking fifth.  Rounding out the top ten were Paulie Colagiovanni, who earned hard charger honors coming from 22nd, Pieniazek, Matt Billings, Jeff Cook and Mike Mahaney.

ESS/FONDA NOTES – 36 sprint cars filled the pit area of the first of two stops at the Track of Champions…former promoter Ric Lucia and race director Marty Beberwyck sponsored the dash and raised the purse to $500…ESS’ was to be at the Utica-Rome Speedway on Sunday night but fell victim to rain and will be made up Sunday, June 17th…Next weekend it’s North of the Border for the first time to Autodome’s Granby and Drummond for two $2,000 to win, $500 to start events with Sunday at Cornwall paying $2000 to win and $325 to start.