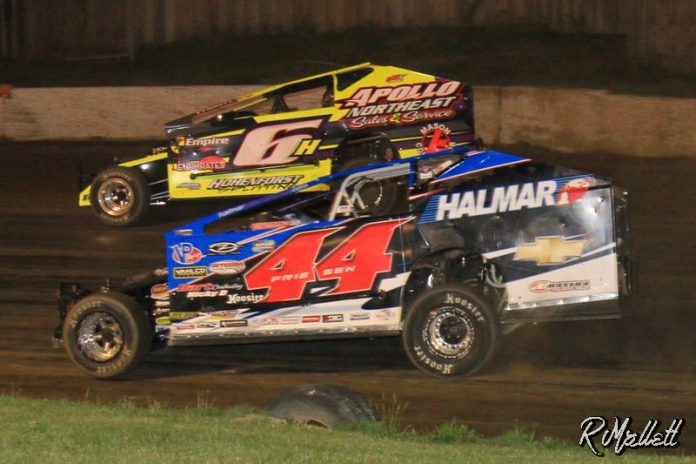 FONDA, NY –  If you have never been to the Fonda Speedway on Military Appreciation Night, mark your calendars and be sure to attend in the near future. Demitraszek Enterprises celebration on Memorial Day weekend is second to none as they make it a truly special event.

This past Saturday was no different as all veterans in attendance at the track were invited to victory lane during intermission as they were honored for serving our country by all the fans in attendance who gave the veterans many ovations during the salute to them.


Promoter Pete Demitraszek introduced New York State assemblyman Angelo Santabarbara who was on hand to salute the troops saying to the fans “tonight we honor these heroes for their dedication to our country”. That was followed by a moment of silence and then Mr. Santabarbara ended the ceremony saying “New York State has 900,000 military veterans and we need to remember the 1000’s of soldiers out there who are away from their families so we can be here with ours.”

Santabarbara was also the honorary starter for the pro stock feature as chief starter Joe Kriss shared the starters stand with the New York State Assemblyman.

After winning modified heat race number one in a heads up start situation, Jeremy Wilder started on the pole position in the 30-lap modified event and took the lead at the drop of the green flag. Lap two saw two things that you almost never see, one was Stewart Friesen being so loose on the outside of turn four that he almost spun his car out on his own, and number two was defending track champion Tim Fuller in the tire wall in turn four bringing out an early race caution. Friesen continued unscathed while Fuller pitted and returned to the rear of the field.

Wilder continued to lead on the restart with Josh Hohenforst second and Bobby Varin now third after starting fifth. On the outside of turn two on lap four, Hohenforst took the race lead with Friesen now in the top five after starting eighth. Friesen just continued to pick off cars lap after lap and was up to the third position on lap nine after getting by Varin for the spot. Friesen was running the extreme outside of the track to get to the front, so extreme in fact that he was either coming close to or actually scraping the wall between turns one and two with the right rear of the Halmar DKM #44.

Hohenforst held a straightaway advantage on lap 10 with Friesen the new second place car two laps later after getting by Wilder. At the halfway point Friesen was racing between two lap cars to keep pace with the race leader as Hohenforst, Friesen, Varin, Wilder, and Shaun Pangman raced in the top five. Friesen quickly caught the leading car of Hohenforst who was slowed by a lap car on lap 17 with Friesen taking the lead at that point with a pass on the inside groove of the frontstretch.

Fuller’s problems continued on the next lap as he brought out the caution again when he slowed in turn four. Fuller would again restart at the rear of the field with Friesen choosing the outside groove to restart the race with Hohenforst on the inside. Despite lap traffic the final five laps of the event, Friesen went on to the victory, his second of the 2018 season and the 49th of his career at Fonda as he now sits seventh on the Fonda Speedway all time win list just one win away from tying Pete Corey who has a total of 50 wins during his career at Fonda.

Hohenforst, Wilder, Varin, and Rocky Warner completed the top five in the event.

“Thank you to all of the veterans,” Friesen said in victory lane. “I am lucky enough to call this place (Fonda) home and I have to thank Chris Larson of Halmar and the guys at DKM (Dave Constantino, Erik Mack, and Kyle Hoffman) as our DKM one two finish with Josh (Hohenforst) is pretty special. I also have almost all of my family here with me tonight so this is very special to me because it doesn’t happen that often.”

The 25-lap sportsman feature began with pole sitter David Manchester taking the early race lead with Tony Farone who started on the outside of the front row in tow. Cody Clark started the event in the fourth position and by lap four he was the new second place car after getting by Farone for the spot with sixth place starter Nick Scavia also getting by Farone for the third spot.

A close call for the leader with five laps to go as he hit one of the implement tires on the inside of turn one with the left front of his car bouncing up in the air but fortunately he went on without any damage to his race car. After falling back a few spots early on, third place starter Jeremy Pitts was the third place car in the final laps of the event but it was Scavia and Farone who would fight for the victory in the closing laps.

Farone took the lead of the race for a brief time coming out of turn two on the white flag lap but going into turn three Scavia retook the lead and went on to his second victory of the season and the third of his career in the division at Fonda in the North Country Electrical #17 Teo car over Pitts and Clark who were able to get by Farone in the final turn, with Farone and Ray Zemken completing the top five.

“I don’t ever think that I worked that hard for a win before,” Scavia told Dan Haslun in victory lane. “The track was hard and slick after the sprint cars ran before us but I just settled in on the bottom and got the hard fought win although I think I may have damage to the left front of the car after hitting the implement tire in turn one.”

Kenny Gates started the 20-lap pro stock feature on the outside of the front row and took the race lead at the drop of the green flag. Despite three caution flags during the event Gates was able to win his third feature in a row in 2018 and the 75th of his career as he was never seriously challenged during the event.

Chuck Dumblewski started the event in the third position and was the new second place car on a lap two restart. Despite two chances at taking over the lead on two more restarts, Dumblewski couldn’t find the speed to do it on the outside lane as he settled for a second place finish and was followed in the top five by seventh place starter Jim Normoyle, pole position starter Josh Coonradt, and 11th place starter AJ Walters.

“This is fantastic,” Gates said in victory lane after the win in victory lane. “The track was just the way I like it tonight but they sure made me work for it.”

The 25-lap Earl Halaquist Memorial event for the Empire Super Sprints (ESS) was an exciting race to watch with a total of seven lead changes during the event and the winner of the race not decided until the final lap between a father and son who are local favorites of the Fonda Speedway.

Josh Pieniazek started the event in the third position and at the drop of the green flag used a fantastic move on the inside to get by the front row of Paul Kinney and Cory Sparks for the early race lead. Sparks was using the extreme outside groove on the speedway and got the lead on lap four after sweeping around Pieniazek on the outside of turn four.

Sparks and Pieniazek raced side by side for an entire lap with Pieniazek leading lap five before Sparks retook the lead three laps later in lap traffic. When Sparks got so high in turn two that he almost hit the outside wall, he spun his car with the field barreling down on him bringing out another caution. Fortunately all the other cars missed Sparks who was facing the field when the caution came out.

Bobby made a great move on the inside of turn two on lap 21 to take the race lead and looked as though he may be going on for the win. His son Danny had different ideas however and on lap 24 he must have been watching when his father took the lead from Hebing as Danny got by his father in the same spot, on the inside of turn two. Danny went on for the win in a race that he also won last year at Fonda over Bobby Varin, Hebing, 16th place starter Coleman Gulick, and eighth place starter Steve Piorier.

“It’s always nice to come home and get a win,” Danny Varin said. “It was a heck of a race with my dad, my car wasn’t great as there was something going on with it all night.”

Derrick McGrew Jr. led every lap in the limited sportsman feature for his second win of the season and was followed to the checkered flag by Michael McCallion and Nate Furman while Rob VanAernam led every lap of the street stock feature for his 39th career win at Fonda over defending track champion Johnny Young, Jason Samrov, Michael Arnold, Steven Young, Cliff Haslun, and Scott Gauthier.

Next Saturday at the Fonda Speedway Sampson Motor Car and Make A Wish present a regular racing program in all divisions starting at 7:00 p.m.