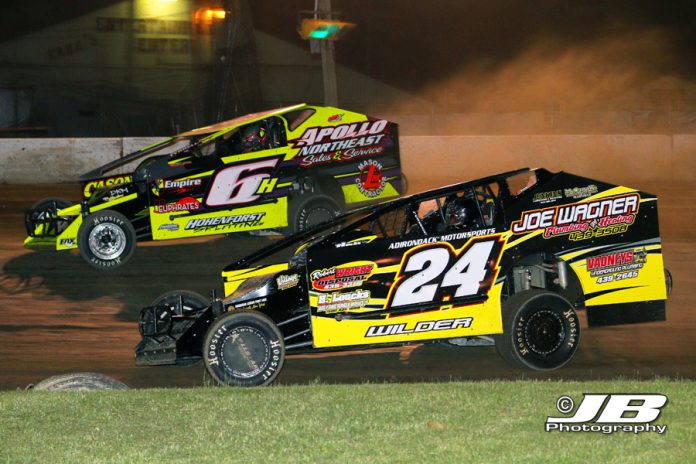 FONDA, NY – This coming Saturday, June 2 at the “Track of Champions” Fonda Speedway, Sampson Motor Car presents a regular racing program in all regular divisions with a starting time of 7:00 p.m. on Make A Wish Night.

Last year on the first week of June at Fonda the only driver who won that night that went on to win the track championship was Johnny Young in the street stock division.

Other winners on the first Saturday of June in 2017 included Bobby Varin who won his first of five events of the 2017 season, Rocky Warner who has moved up to the modified division for 2018, EJ McAuliffe who has only raced at Fonda once this season so far, and Luke Horning who won both races in twin feature events held last year on the first Saturday in June on his way to a three win season.

Last Saturday evening Stewart Friesen went on to the modified win, which was his second of the 2018 season in the DKM “Cyclone” #44. The significance of the win was that it was Friesen’s 49th of his career at Fonda as he now sits seventh on the Fonda Speedway all time win list just one win away from tying Pete Corey who has a total of 50 wins during his career at Fonda.

The Fonda Speedway Museum will be open on Saturday as well so please stop in before the racing program begins to see all the special items that they have on display.

Please go to the Fonda Speedway website www.newfondaspeedway.com for more information about the “Track of Champions”.