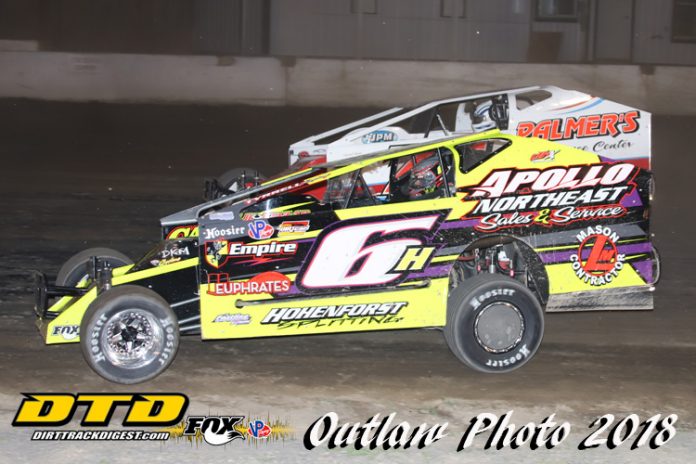 FONDA, NY – This Saturday, June 16 at the “Track of Champions” Fonda Speedway, another exciting racing card will be run in all regular divisions on Father’s Day Starters/New York State Stock Car Association (NYSSCA) Night. All regular divisions will be in action with a starting time of 7:00 p.m.

The racetrack has been in fantastic shape this season providing side-by-side racing and late race passes for feature wins including many on the final lap of the feature event! The pit area has also been full of racecars as well with 98 of them in the pit area last Saturday.

Last Saturday evening was a night of firsts of sorts as there were two first time winners, one being Brian Borst who was the “crate” sportsman feature winner while the other was Randy Cosselman in the pro stock feature event. Other feature winners last Saturday evening at Fonda were Bobby Varin (modified), Travis Billington (limited sportsman), and Johnny Young (street stock).

Brian Borst restarted his racing career this season in the “crate” sportsman division after being a competitor at Fonda for many years in the past. Borst was the 2003 358-modified track champion at Fonda and competed for many seasons in the “open” sportsman division with a total of 15 wins in that class, the last win coming back on 7/31/1999. Borst also has a pro stock feature win at Fonda during his racing career.

Travis Billington is now a seven-time feature winner in the limited sportsman division during his racing career at Fonda with the first win coming back on 4/30/2016.

Defending street stock track champion Johnny Young is now a 10-time feature winner in the street stock division with his first win coming back on 8/16/2014.

Please also remember to come to the track early and visit the Fonda Speedway Museum, which is free to go into and look around to see some of the history of the “Track of Champions”! David, Jackie, & Jessica Lape along with Randy and Travis Colegrove and Matt Noles are doing a fantastic job at the museum so be sure to stop in and see what they currently have on display!