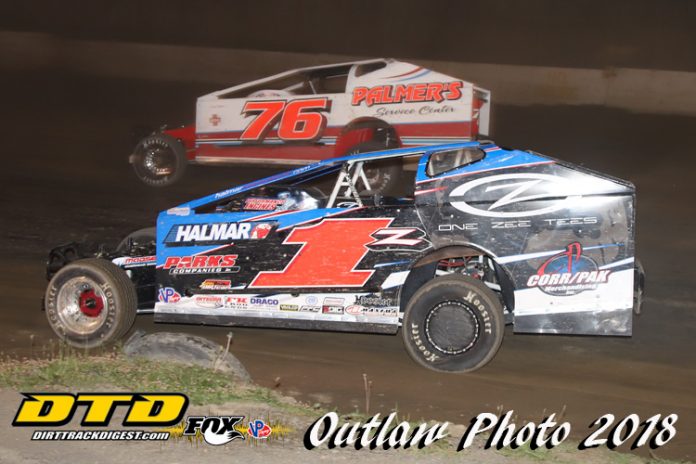 FONDA, NY – This coming Saturday, July 14 at the “Track of Champions” Fonda Speedway, the King of Dirt (KOD) sportsman series will be in town along with all regular weekly divisions and Kiddie Rides on Palmer’s Service Center Night! Racing will begin at the normal 7:00 p.m. starting time.

According to the King of Dirt (KOD) Facebook page, the King of Dirt (KOD) Racing Sportsman Series event at Fonda will be presented by Andy’s Speed Shop and Dodson Construction and will pay $1,000 to win along with a $250 Andy’s Bounty! Drivers will draw for timed groups with time trials setting the qualifying main lineups. The top 12 qualifiers will redraw for feature starting positions in the 30-lap main event with double file restarts throughout the feature event. There will be a $20 entry fee for all sportsman drivers competing in the event.

Before the racing action, gets underway please remember to visit the Fonda Speedway Museum, which is located on the Fonda Fairgrounds along the railroad tracks in one of the Fairgrounds buildings. David, Jackie, and Jessica Lape along with Randy and Travis Colegrove and Matt Noles have done a fantastic job bringing the history of the speedway back for all to see.

With the King of Dirt (KOD) Sportsman Series in town, the racecars of tour regulars Connor Cleveland and Chad Edwards will also be on display at the museum from 4:00 to 6:00 p.m.

Lou Lazzaro’s last car and the last car prepared for Jack Johnson by the Palmer’s will also be on display inside the museum this Saturday, July 14.

The museum will also have former sportsman division champion Timmy Clemons on hand along with Tommy Spencer and one of Tommy’s racecars, as they will be reuniting for one night. That’s right; Tim Clemons will be racing this Saturday at Fonda!

New to the museum exhibits this week are a helmet and trophy from the Danny Ody collection, which will be donated by Jeff Karabin.

I had the pleasure of spending a few years camping at Super DIRT Week with Danny and he was one of the nicest guys in racing throughout his racing career and a very popular one at that as he always treated everyone equally and with respect. Unfortunately, for the many people that knew Danny, it was a sad day back on January 5, 2014 when he passed away.

The late Danny Ody started his racing career at the early age of 16. By the age of 20, he was racing at the Fonda Speedway for the inaugural year of the street stock division and was crowned the first track champion of that class at Fonda. After that, Ody competed nationally at many different levels of dirt and asphalt racing from Go-Karts, Slingshots, Mini-Modifieds, Outlaw Mini-Sprints, Pro Stocks Sprints, IMCA, Late Models, Sportsman, and Big Block Modifieds.

Ody was very dedicated and loyal to the sport of auto racing and credited his successes in the sport to team involvement, hard work, and determination to be the best. He also strived to include the kids in racing by doing Design-A-Car, which was very successful with the kids coloring a paint scheme for the IMCA car that Danny ran at Fonda.

Ody was also the racing historian for the Northeast putting endless hours into research and started the history of local racetracks, which was called Old Speedways!

For more information about the “Track of Champions” Fonda Speedway please go to their website www.newfondaspeedway.com and you can also find them on Facebook at www.facebook.com/Newfondaspeedway More information about the King of Dirt (KOD) Series can be found by going to their Facebook page www.facebook.com/kingofdirtracing or their website www.kingofdirtracing.com