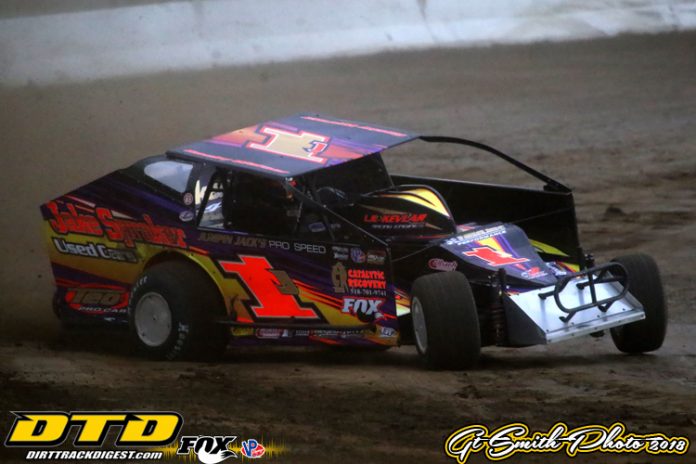 FONDA, NY – It was a night of firsts at the “Track of Champions” Fonda Speedway on “Night of Features, Championship Saturday” as four drivers got to visit victory lane for the first time in their careers including Rocky Warner (modified), Charlie Tibbitts (sportsman), Michael Wagner Fitzgerald (limited sportsman), and Michael Arnold (street stock). Josh Coonradt was the other event winner in the pro stock division.

Warner scored his win in the Jake Spraker Used Cars sponsored Teo car #1J owned by Jake and Nancy Spraker and was very emotional after the win, realizing just how special it was to win in the modified division at Fonda for the first time in his rookie season.

When victory lane announcer Dan Haslun asked Warner how his first win at Fonda in the modified division felt Rocky responded with “great, especially with Stewy (Stewart Friesen) here”, which was followed by a big ovation from the great crowd on hand. “That’s all that matters.”

With that win Warner has now won a feature event in every division that races at Fonda during his career.


“To win in every division here at Fonda is phenomenal, it’s prestigious to put your name in the record book here,” he said as the emotions started to show. “This opportunity is hard to come by, thank you.” That was followed by another big ovation by the crowd after the very popular win.

“Carole and Alton have put together a great car and our team works hard and really puts their heads to the grindstone,” Varin said as the champions celebrated in victory lane. “I got a little nervous there at the end, I knew that I had to dig deep and drive it hard. We lost our good engine recently but the handling was right on with less horsepower under the hood. To be a champion at the “Track of Champions” is an honor and I’m on top of the world right now. I want to dedicate this championship to my mother, Carole’s (car owner Carole Palmer’s) father, and Max Phillips who are all looking down on us tonight.”

Chad Edwards won the 2018 602 sportsman track champion for the first time in his career at Fonda saying afterwards, “Our goal for this season was to win the championship but back in June we were sitting seventh in points, 85 points back, and that’s when the team sat down and discussed it. We put our heads together and we were able to do it. It’s all about consistency. I was stressing about it all day because I’ve lost the title twice before by only a few points.”

“It’s been a wild week to put it mildly,” Gates said during the championship celebration. “I want to dedicate this championship to my mother who passed away this week. My crew worked so hard on this car all year and especially this week in order to get it ready to race on Monday after our crash last Saturday only to be rained out on Monday night. It’s been a great year with six wins and all top five finishes except for one. We are definitely looking forward to the Hondo race (coming up on September 15) we want that one real bad.”

Johnny Young is now a two time street stock champion at Fonda after winning the 2018 title on Saturday and also last year in 2017.

“Consistency wins championships,” Young said. “I owe it all to my crew.”

“This is pretty cool,” McGrew Jr. said during the championship celebration. “My dad said that our goal for 2018 was to just finish every race and keep the car clean.”

On lap 10, Tim Fuller, Bobby Varin, and Stewart Friesen all got by Greene for positions in the top five with Warner stretching out his advantage to a full straightaway at that point. At the halfway point Fuller got by Wilder for the second position with Friesen also getting by Wilder for the third spot four laps later.

Fuller was able to close in on Warner with seven laps to go in the event but when Warner cleared the lap cars of Dillon Steuer and Bobby Hackel IV with two laps to go it gave him some breathing room. Fuller closed in again on the final lap but Warner was able to hold on for his first career win in the modified division over Fuller, Friesen, Wilder, and Varin.

“I saw somebody fill the nose down low but I didn’t know who it was maybe Stewart (Friesen) or Tim (Fuller),” Warner said in victory lane. “I used the lap cars to my advantage to keep whoever it was pinned down low while I was running up high on the outside.”

Ray Zemken and Charlie Tibbitts started the sportsman feature on the front row with Zemken leading the first five laps of the event. On a restart after the only yellow flag in the event, Tibbitts got the lead away from Zemken and pulled away from the rest of the field to a straightaway lead by lap 14.

Point leader going into the night Chad Edwards started the event in the 11th position and by lap 15 had gotten by both Tony Farone and David Manchester for the third position with 12th place starter Adam McAuliffe right behind in fourth after also getting by the same two cars. Tibbitts was long gone and went on to his first career win at Fonda in the Charlie Tibbitts Masonry sponsored #T1 over Zemken, Edwards, McAuliffe, and Nick Scavia.

“It was a really great race tonight,” Tibbitts said in victory lane. “The car was perfect and we were able to come away with the victory. I have to thank my mom and dad who make this all possible for me along with my crew and sponsors.”

Ivan Joslin was the early race leader in the pro stock feature event followed by Luke Horning. Eighth place starter Josh Coonradt was on the move early taking the third position on lap two and then getting by Horning for the second spot one lap later. On the inside of turn three on lap five, Coonradt took the lead away from Joslin and immediately stretched out his advantage.

“What a race,” Coonradt said in victory lane. “Luke (Horning) was a challenge for sure but we were able to come away with the win. I want to thank all the fans, my crew, and sponsors.”

Rob VanAernam started the street stock feature from outside of the front row and took the early lead in the event. When VanAernam spun out on the backstretch on lap 11, it brought out the yellow and handed the lead over to Michael Arnold. Arnold led the rest of the way for his first career win in the division at Fonda over Johnny Young, Dave Horning Sr., Chase Aussicker, and Zach Sorrentino.

Gerard LeClair led the first 12 laps of the limited sportsman feature until seventh place starter Michael Wagner-Fitzgerald took over the lead and went on to his first career win in the division at Fonda over Michael McCallion, LeClair, EJ McAuliffe, and Cory White.

The next race at the Fonda Speedway will be on Saturday, September 15 after the break for the annual Fonda Fair. 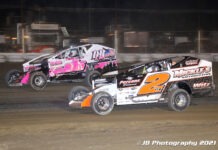