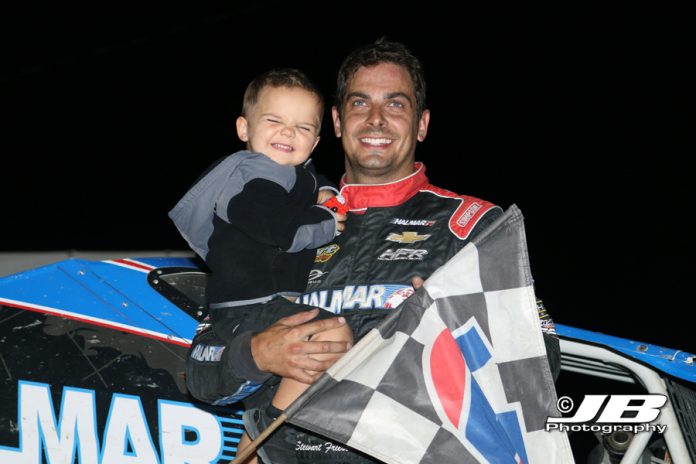 FONDA, NY – Day one of the 2018 Thunder Along the Mohawk weekend at the “Track of Champions” Fonda Speedway featured the DIRTcar 358-Modified Southern Region and DIRTcar Sportsman Series Central Region events along with the Roberts Towing & Recovery of Albany Street Stock Challenge with a $500 to win payout for that event.

Frank Pasek also put up some extra money in Memory of his wife Judy Pasek, paying a $100 bonus to the leader of lap 20 in the sportsman feature, and a $40 bonus on lap 27 of the 358-modified feature event. Also getting involved in the bonus money payout was Jeremy Dodge of JD Junk Removal who according to Facebook put up two $50 gift certificates to the second place heat race finishers and a $100 gift certificate to Friday’s feature winners.

A redraw set the starting lineup for the 60-lap Super DIRTcar Series 358-Modified feature event with Stewart Friesen on the pole and 2018 Fonda Speedway modified champion Bobby Varin alongside. Varin took the lead at the drop of the green flag with Friesen, and last week’s winner Pat Ward in tow. While racing hard for the fourth position on lap two, Larry Wight and Matt Sheppard both got out of shape in turn one but gathered it up before getting together and possibly ending both of their races.

Varin was in lap traffic by lap 11 as Friesen closed in for a run at the lead, racing around the inside of the speedway to gain ground on the leader. Going into turn four on lap 16, Friesen hit the inside berm on the track and shot back out on the track with contact almost being made with the leader at that point. Friesen was able to gather it up and continue on chasing the leader.

Wight drove into the pit area on lap 18 while running fourth and was out of the event at that point with Varin again in lap traffic. On the inside of turn three on lap 20, Friesen was able to take the lead away and quickly stretched out his advantage over Varin in second.

The yellow was out on lap 21 for Jeremy Wilder who suffered a flat right rear tire but he was able to pit and restart at the rear of the field. Friesen was out to a straightaway advantage at the halfway point in the 60-lap event with Varin, Matt Sheppard, Ward, and Erick Rudolph completing the top five.

Sheppard’s good run came to an end on lap 39 when he drove into the pit area while running third with Friesen now out to over a six second lead on Varin. Lap traffic slowed the leader on lap 43 allowing Varin to cut three seconds off of Friesen’s lead, but once the leader cleared the lap cars he pulled away again to win the event by five and a half seconds according to timing and scoring.

Friesen was the winner of the event in the Halmar #44 DKM “Cyclone” chassis and was followed in the top five by Varin, Ward, Rudolph, and Wilder who came all the way back through the field for a top five finish.

“Thanks to my dad for drawing me a good pill for starting position tonight,” Friesen said in victory lane. “It was hammer down tonight, had to keep the car free and wound up. Once Bobby (Varin) got the lead I thought that it may be over but he got bottled up in lap traffic and I was able to catch him and get by. Thanks to the DKM guys who had to put a new front clip on this car this week.”

A redraw also set up starting positions for the 50-lap DIRTcar Sportsman Series event with David Schilling taking the lead at the drop of the green flag from his outside pole starting position with Fonda regular Cody Clark in tow. An early yellow slowed the field on lap three when four cars crashed in between turns one and two.

On the restart, the top three cars of Schilling, Clark, and Dave Constantino pulled away in a three car battle for the top spot with Rocco Leone a distant fourth. A five car wreck in turn two slowed the race again on lap 14 and on this restart Constantino was the new second place car. Constantino closed in on Schilling for the lead on lap 20, but a few laps later Schilling pulled away again to a comfortable lead.

When lap traffic slowed the leader on lap 31, Constantino closed in again with Brian Pessolano getting by Leone for the fourth position and ninth place starter Mark Mortensen getting by both Tim Hartman Jr. and Leone for the fifth position. With just under 10 laps to go, Constantino made a move to the inside of both a lap car and Schilling in turn four to take the lead in a three wide move.

Constantino held a straightaway lead with five laps to go in the event with a caution on lap 48 slowing the field one more time. Constantino pulled away again on the restart with the only change in position on the restart in the top five being Mortensen who moved into the fourth position. The top five at the checkered flag were Constantino in the Ray Sefrin owned, West End Towing sponsored #7 DKM “Cyclone” car followed by Schilling, Pessolano, Mortensen, and Hartman Jr.

“Running second for so long gave me a chance to study what the 20 (Schilling) was doing,” Constantino said in victory lane. “I was really bad on restarts tonight, maybe something wrong with the carburetor or something. I certainly didn’t want that last caution, I thought we were going to get killed on the restart. Thanks to my car owner Ray who gives me everything that I need and allows me to do what I want and to my crew who prepares this car for me and all I have to do is drive it.”

The Roberts Towing & Recovery street stock feature began with Al Relyea the early race leader with Randy Miller second. By lap six, Relyea pulled away to a comfortable lead by lap six and at the halfway point was in lap traffic with the top five consisting of Relyea, Miller, David Cook, Zach Sorrentino, and Michael Arnold.

A yellow flag slowed the field on lap 13 when Harold Chadderdon got into the infield wall on the front stretch. He was not injured but there was heavy damage done to the car. On the restart, Miller took the lead away from Relyea who dropped back to the third position as Sorrentino also got by for second. The red flag was out on lap 16 for Johnny Young and Cook who got together and went heavily into the tire wall in turn three. Cook suffered heavy damage to his car but both drivers were not injured.

The race, which was supposed to be a 20-lap event, was shortened to 18 laps with Miller leading the final two laps for the win despite heavy pressure from Sorrentino over the final two laps. Relyea, Steve Cosselman, and Jacob Currier completed the top five. For Miller it was his third career win at Fonda.

“The track was good tonight, heavy,” Miller said in victory lane. “Al (Relyea) was fast, but I was able to get him in turn one on a restart.”

Thunder Along the Mohawk weekend concludes today with the running of “The Jack”, a 100-lap Super DIRTcar Series with the winner being awarded the 12th starting position for the Super Dirt Week at Oswego in October. Also on the racing card will be a 50-lap DIRTcar Pro Stock Series race, the 25-lap Kramer Williamson Memorial event for sprint cars, and a 30-lap DIRTcar Sportsman Series event. Starting time will be 6:00 p.m.