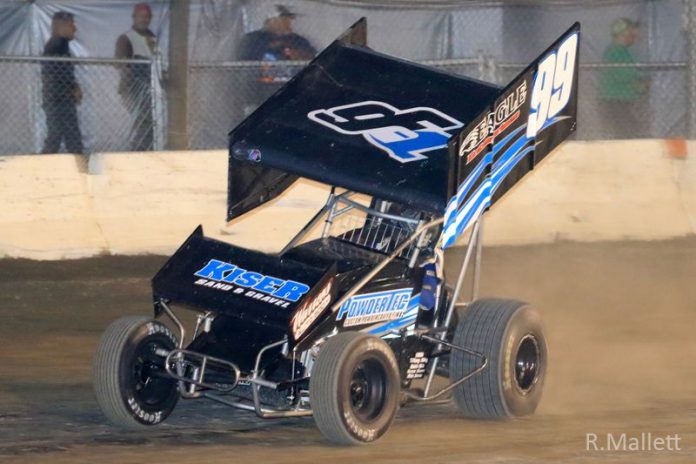 FONDA, NY – The SuperGen Products with Champion Power Equipment CRSA Sprint Car Series roared back into action Saturday night with their first stop of the season at the Fonda Speedway. When all was said and done a driver with a familiar last name sat in the hallowed ground known as victory lane at the Track of Champions.

Mike Kiser, making his first start of the 2019 season, made a last lap pass to take the win in the 20 lap A-Main event. The event was not only the seventh event of the CRSA season but the second in the Kennedy’s of Troy Northway 90 Challenge Mini-Series.

The win paid $1,000 for Kiser and his team. Kiser also claimed the Pro Fab Engineering/Mike Van Dusen bonus of $700. The bonus was on the line for drivers who started in the fifth or sixth row and went on to pick up the win.

Thomas Radivoy and Sydney Prince led the strong 20 car field to the green however before a lap could be completed fifth place points runner Johnny Kolosek flipped on the front straight-a-way. He walked away from the incident. On the restart three drivers – Darryl Ruggles, Cory Sparks and Dana Wagner tangled in the short chute between turns three and four. All three would head pit side.

When racing was able to get started all eyes were on early race leader Sydney Prince. Prince looked strong on the lead, opening a large advantage over early second place runner Radivoy. The driver on the charge was Kiser.


Kiser, of Cooperstown, arrived late to the track and had no hot laps. He piloted the Powder Tech Powder Coatings number 99 in the third heat race and finished in a redraw position. He drew the ninth spot and set his sights on the front. Kiser moved into second past Radivoy late in the event and then quickly reeled in Prince.

As the duo came down to the white flag Kiser was all over the tail tank of Prince. Kiser used slower lapped traffic to his advantage and took the lead from Prince on the final lap. Kiser picked up the win over Prince, Radivoy, Justin Mills and Jeff Trombley.

Heat races for the 20 car field were won by Emily VanInwegen, Ruggles and Wagner.

The 2019 SuperGen Products with Champion Power Equipment CRSA Sprint Car Series is back in action on Sunday at the Glen Ridge Motorsports Park in Fultonville, New York.