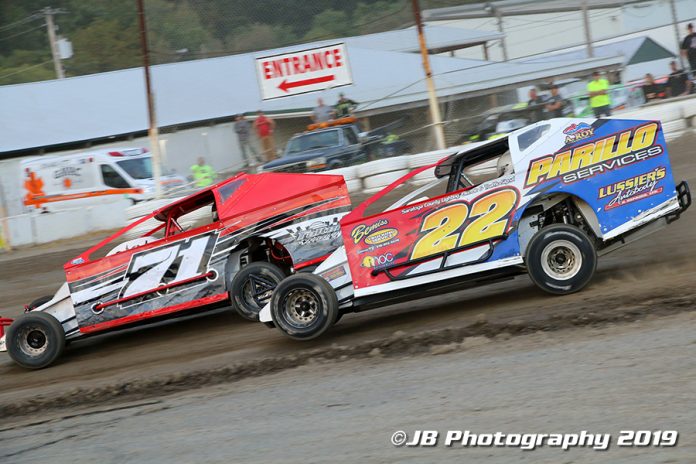 Glenville, N.Y., racer Hartman was utterly dominant in the 50-lap main event. After driving from eighth place to a runner-up finish in his qualifying heat, Hartman – the 2019 Fonda Speedway Sportsman Modified track champion – drew the outside pole for the main event. A 45-minute rain delay and five caution periods did little to slow Hartman down, and he led every lap en route to his third win in the marquee Crate Sportsman Modified race.

Hartman had brief challenges during the race from Tim Falter and Brian Borst, and JaMike Sowle made a last-ditch effort after the final restart with three laps to go, but Hartman never wavered and drove off to the victory. His win was worth $2,000 cash and a $250 bonus from Andy’s Speed Shop. Glen, N.Y., veteran Sowle was never out of the top five during the race and ended up second.

The three-race KOD championship battle was wide open in 2019, and Hackel was the driver standing tallest at the end. Hackel’s title run began with a victory on May 26 in the A-Verdi Storage & Office Solutions “Memorial Day Kickoff 50” at Devil’s Bowl Speedway, but a tough 18th-place showing in the “Leon Gonyo Memorial 40” at Devil’s Bowl on August 11 created a jumble at the top of the leaderboard.

Vince Quenneville entered the Fonda finale with a four-point lead on Hackel, with Adam Pierson, Billy Lussier, Joey Scaborough, and Calabrese all within 14 points. Scarborough and Pierson each crashed on lap 1, Quenneville had a tough night that began with a poor draw for his qualifying heat and ended with a 16th-place finish in the main event, and Lussier was one of 12 drivers who failed to qualify for the 30-car starting field.

All told, Rensselaer, N.Y.’s Hackel was able to squeeze into the championship spot by just seven points over Quenneville, 377-370. Calabrese ended up in third place overall, just one point behind Quenneville at 369. Ballestero (363) and Scarborough (362) rounded out the top five in the unofficial final standings, followed by Reckner, Pierson, Frank Hoard III, Michael Wagner-Fitzgerald, and Mike Fisher.