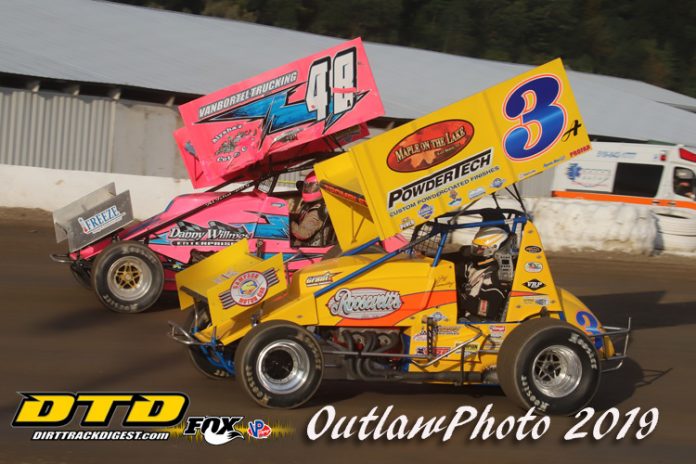 FONDA, NY – The old saying goes, there is no place like home. On Saturday night at the Fonda Speedway Jeff Trombley proved that adage true as the two time and defending SuperGen Products with Champion Power Equipment CRSA Sprint Car Series champion not only won the battle but nearly wrapped up the war.

Trombley, of nearby Altamont, won the 20-lap Kennedy’s of Troy 20-lap A-Main event and in doing so, only needs to start the season finale on October 11th to lock up the 2019 overall series championship. The title would be his third overall and third consecutive. The event was also the fifth round of the Kennedy’s of Troy Northway-90 Challenge, a title Trombley did lock up with the win.

The top two drivers in the point standings – Trombley and Darryl Ruggles, led the field to the green flag with Trombley taking the early lead. Trombley held the top spot without much of a challenge until late in the event. That is when sixth place starter Mike Kiser started to close in.

Kiser, a second generation driver out of Cooperstown, New York won the first visit of the CRSA to New York’s oldest track still in operation. Once in the second position, Kiser started to close the 15 plus car length gap on Trombley. With the aid of slower traffic, Kiser pulled right up to the tail tank of Trombley in the late stages of the event and was able to get past for the lead.

Not to be out done, Trombley came right back and regained the top spot. Trombley would hold on for the win over Kiser, Ruggles, Alysha Bay and Dana Wagner. Heat races for the 17 car field were won by Kiser and Ruggles.

The SuperGen Products with Champion Power Equipment CRSA Sprint Car Series is back in action on Friday October 11th for the season finale at the Afton Motorsports Park, a part of the Short Track Super Nationals.