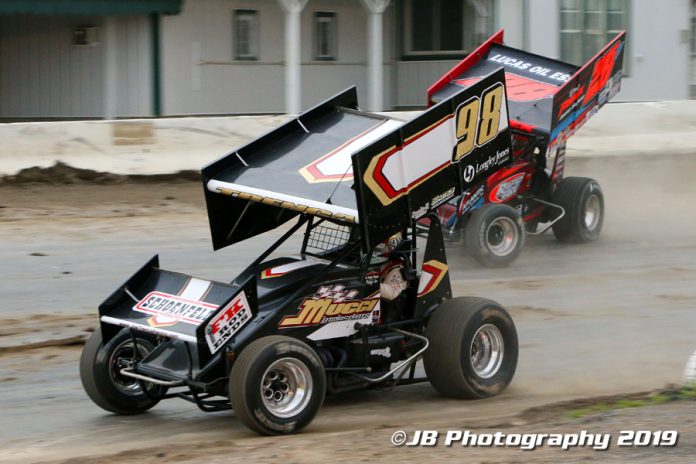 The field is already set for the Earl Halaquist memorial as heats were able to be complete on May 25 before rain forced to cancel the remaining show. A complete show with new heats, dash and A-Main will follow.

Despite not winning a Patriot Sprint Tour A-Main since Mid-July, Davie Franek has still been able to maintain the point lead over Joe Trenca and Jordan Thomas heading into Friday. Only 41 points separate Franek and Trenca at the top of the point standings. Jordan sits quietly in third as he trails Franek by 51 points. Anything can happen come Friday night.

It is important to make mention that only the Earl Halaquist Memorial will be scored as a standard PST event while the second feature will be scored by show up points.

Also, $645 has been sold in lap money for the 14th edition of the Earl Halaquist Memorial, an event that pays tribute to a northeast sprint car legend. Halaquist amassed 52 United Racing Club wins and six series championships (1962, ’64, ’66,’67, 68’, 69). Perhaps his most impressive season was in 1967 when he accomplished 14 feature wins! He has been inducted into several Hall of Fames including the National Sprint Car Hall of Fame back in 2010. Halaquist passed away in 2001 at the age of 75 but his legacy in sprint car racing here in northeast continues to live on.

The first ever race honoring Halaquist was back in 2004 at the Black Rock (Now Outlaw) Speedway where Blake Breen was the winner. PST sanctioned the event also in 2005 and 2006 where George Suprick and Chuck Hebing have won respectively. The event then moved to Fonda Speedway under the Empire Super Sprints banner from 2007 to 2013. Afton Speedway hosted the event from 2014 to 2016 before returning to Fonda the last two seasons.

This will be the fourth and fifth time the Patriot Sprint Tour will be visiting the historic half-mile in program history dating back to 2016. Past winners include Stewart Friesen, Davie Franek and Jared Zimbardi.