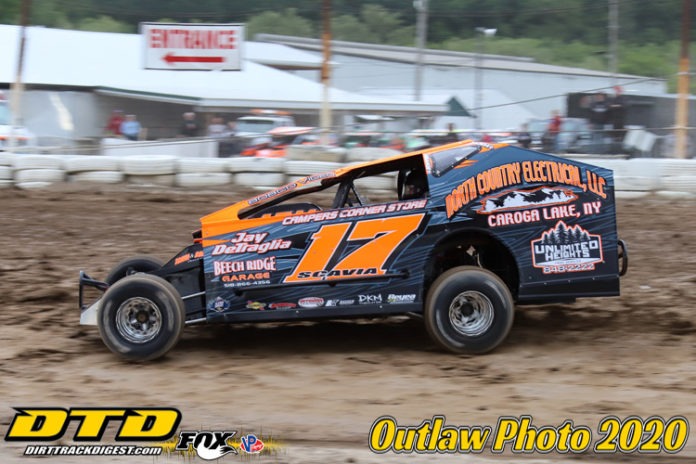 FONDA, NY – Nick Scavia opened up the 2020 season at the Fonda Speedway on a high note.  Scavia dominated the 25-lap opener for the Sportsman to take the victory.

The green flag came out with Scavia and JaMike Sowle starting on the front row and taking the field into turn one.

Scavia and Sowle fought the lead with Chad Edwards moving up to third early on.

On lap three the caution came out as Thomas VanVorst was involved in an incident in turn one.

When the green came back out, Scavia jumped back out to the lead.  By lap five there was a three-wide battle down the backstretch with Brian Calabrese, Brian Borst and Tim Hartman Jr., racing for spots in the top five.

Eventually, Hartman caught Sowle on lap seven and they battled neck and neck around the ‘Track of Champions’ as Scavia’s lead got even wider.

With 10 laps complete, Hartman made contact with Joel Knudsen Jr., as he looked to chase down Scavia.

A lap later, the caution flew as Tucker O’Connor and Knudsen got together in turn one ending O’Conner’s night.

The race went green before going right back to caution as Hartman showed heavy smoke and slowed.  It was a heartbreaker for Hartman as he had one of the fastest cars on the track.

At the next green flag it was Scavia racing back to the lead.  With Scavia showing the way, Calabrese passed Williams for third before challenging Edwards for second.

Scavia had a huge lead with five laps to go.  Scavia’s lead continued to grow until lap 24.  Before he could get to the checkers, the caution flew as E.J. McAuliffe, Charlie Tibbitts and Mike Palmer tangled in turn four.  All drivers continued.

Scavia got one more green flag.  He was then able to coast to the victory to take the win on the first night of action at the Fonda Speedway.

Scavia said in victory lane, “this means a lot for me and the guys to win on the first night, especially after our equipment fire last year “

Edwards held on for second with Calabrese finishing third.  Williams and Sowle completed the top five.