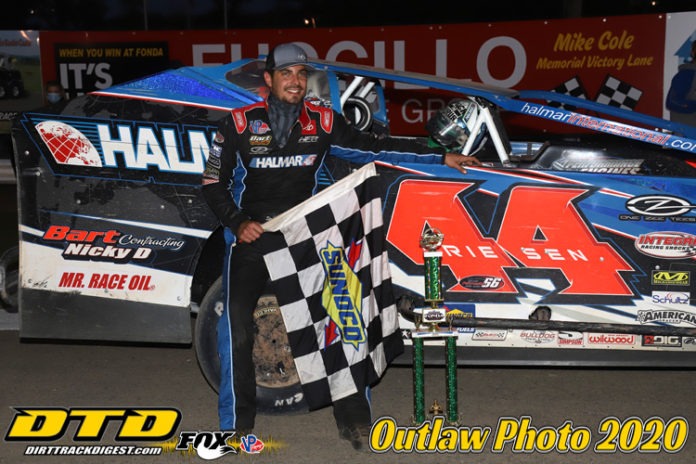 FONDA, NY – Stewart Friesen got to the lead just before halfway in the Modified feature event and rolled off into the sunset, taking the Fonda Speedway feature victory.

Mike Maresca led Adam McAuliffe in the opening stages of the season opening 30-lap feature, with Rocky Warner slotting into third. After a couple of laps, Warner’s lane up top came to life, rolling by McAuliffe for second on lap six. Larry Wight took a few laps to get rolling, but grabbed third a lap later, closing in on Warner while the both of them caught Maresca.

Wight took a swing at Warner on lap ten, but Warner held tough up top and kept the spot. Just behind them, perennial frontrunners Friesen and Matt Sheppard worked into fourth and fifth. With the race nearing halfway, the top five were all within half a straightaway, but a lap 13 caution halted the battle.

Maresca held the point on the restart, but Friesen darted from fourth to second on the extreme bottom. A lap later, Friesen rolled under Maresca for the lead, scored official on lap 14.

Wight’s good run took a big setback, going head on into the turn one wall, returning to the track and finishing twelfth despite the broken chassis. The hit drew the caution at lap 15, with Friesen restarting out front and driving away from Warner. With Warner alone in second, Maresca and Sheppard argued over third, as Sheppard took the spot at lap 18.

With ten to go, Friesen’s lead stabilized at four seconds over Warner. Traffic loomed, and Sheppard was gaining on Warner. Friesen began to work through traffic and Warner slowly inched in, but had Sheppard to contend with himself. On the stopwatch, Sheppard was the fastest car on the track, taking second on lap 27.

Sheppard was still a good distance behind Friesen, and traffic for Friesen was uneventful in the final laps. The end result was Friesen flying under the checkered flag first, scoring his 61st Fonda Speedway victory. Sheppard crossed in second, with Warner, Maresca, and Matt Delorenzo completing the top five.

“It was a different Fonda Speedway than I’m used to, it was slick out there,” Friesen said. “I ran a tire a little too hard for this surface but it was different for all of us. I saw last night it was tacky, but with the sun and wind today it got slippery. It was wide surface and a ton of fun out there with a good group of cars.”