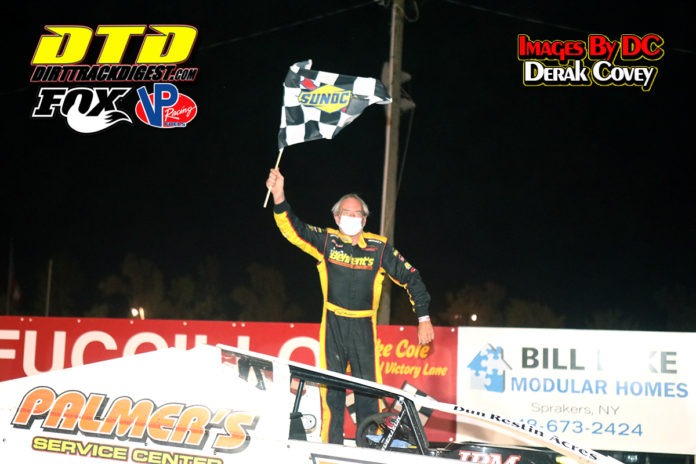 Fonda, NY – The “Jeffer” as he is called by many, Jeff Hoetzler won his first career Sunoco Modified feature at the “Track of Champions” Fonda Speedway on Saturday evening in the $4,000 to win Firecracker Showdown. The race was named as such as it was a shakedown run for the Firecracker 50 to be held on Wednesday, July 1.

Hoetzler won the event in the iconic Palmer’s Service Center #76 Teo Pro car owned by Carole and Alton Palmer. Hoetzler was named as the driver of the car earlier this year and the combined experience of both Hoetzler and car owner and former driver Alton Palmer make it a very potent race team for sure.

In the Fuccillo Automotive Group Mike Cole Memorial victory lane, Mimi Lazzaro was honored to interview Hoetzler, who her father Lou Lazzaro used to race with during his career while Mimi grew up around them all in the pit area.

“Thanks to Alton and Carole for choosing me to drive this racecar,” Hoetzler said in victory lane. “We really couldn’t get a handle on this Teo Pro car, but we were finally able to do so this week. Hopefully, we can keep it up front.”

Hoetzler dedicated the race to Jared Petruska who passed away earlier this year. Petruska and his family owned the Atlas Paving #66 who Hoetzler drove for at times during his career. “This one is for Jared Petruska,” Hoetzler said.

Early day rain made some hard work for the track crew to get the track ready for the racing events on Saturday evening, but they did a tremendous job which led to some really quick lap times during the evening.

In heat three, Danny Varin came close to breaking the track record of his father Bobby who set the record back on April 11, 2009 with a lap of 18.136. Danny’s turned a lap of 18.199 secs in heat race number three on Saturday evening.

It was the first night of handicapping of the 2020 racing season and after winning heat race number one Jeff Hoetzler was handicapped to start on the outside pole and he took the lead at the drop of Joe Kriss’ green flag in the 30-lap Sunoco Modified feature. After starting in the sixth position, Danny Varin gained two spots up to fourth just before the first of only two caution flags slowed the event.

On the restart, Craig Hanson was the new second place car with Varin just behind in third with ninth place starter Josh Hohenforst and 10th place starter and defending track champion Rocky Warner completing the top five. At the halfway point in the event the top five remained the same with the leader in lap traffic by lap 16.

Varin got by Hanson on lap 17 for the second position and one lap later Varin started putting pressure on the leader. Hohenforst and Varin swapped the second position a couple of times with the final caution of the event out with five laps to go for Hanson whose great run came to an end with a flat right rear tire. Hanson would pit for a new tire and rejoin the rear of the field.

Warner took the third position away from Hohenforst with three laps to go with 14th place starter Matt DeLorenzo following him through for the fourth position. Warner got by Varin for the second position with two laps to go in the event but Hoetzler kept the car straight and true to the checkered flag for his first career win at Fonda.

Warner, Varin, DeLorenzo, and Hohenforst completed the top five along with a great run by Scott Huber to finish sixth.

“This is another one for the bucket list,” Hoetzler said. “I haven’t got many years left but it’s always great to come to Fonda. Thanks to Carole and Alton for giving me this opportunity.”

Six caution flags slowed the Swagger Factory Apparel Crate 602 Sportsman feature event with Kevin Chaffee leading at the drop of the green flag from his pole position start. Outside pole starter Ricky Quick took the lead away on lap two and held it until lap six when the first caution flag flew.

Chaffee got the lead on the restart while defending track champion Tim Hartman Jr. took away the second position after starting the event in the fifth spot. Chad Edwards started the event in the 25th position in the John Kollar Motorsports #10% and by lap 10 he was already up to the third position.

Tucker O’Connor had a great run come to an end on lap 11 as he came to a stop in turn three while running fifth, bringing out the caution and on the restart Edwards went from third to first as he took the lead in the event. Chaffee pressured the leader at times and kept it close, but Edwards got the win, the eighth of his career in the division, followed in the top five by Chaffee, 10th place starter JaMike Sowle, Hartman Jr., and eighth place starter Cody Clark.

“It’s been a great start to the season for us,” Edwards said in victory lane. “I tore the left front off of the car in our heat race and got it fixed but while lining up to go out for the feature I noticed the tow was off as it just didn’t look right so I went back to our pit area and the crew adjusted it.”

“We switched to a new Bicknell car for this season and thanks to John Kollar for sending me the money all winter long from his Florida home in order to make this all happen.”

The Montgomery County Office for Aging feature was one of if not the most exciting of the evening with Johnny Young leading at the start from his fifth position start with Stephen Gray in tow. Two-time winner in 2020 Brett Mortensen started the event in the 11th position and by lap two he was already up to the third position.

Mortensen took the second position away from Gray on lap six and from that point on Mortensen was the fastest car on the track as he caught up to the leader by lap 10 of the 15-lap event. Young and Mortensen were side by side for the lead many times throughout the remainder of the event with Young able to hang on to the lead each time.

On the final lap going into turn four to the checkered flag, Mortensen got alongside of Young with the two making contact coming out of the turn forcing Mortensen into the front stretch wall which broke the steering on the #1B. The two cars remained hooked together, side by side to the checkered flag but with no steering Mortensen hit the infield wall in turn one after the cars separated and Young pulled ahead, destroying the front end on Mortensen’s car and sheering off the left front tire.

Young got his first career win in the division in the event while Mortensen ended up second followed by Carter Gibbons, Dylan Eldred, and Gray.

The 20-lap Algonkin Motel Pro Stock feature began with Jason Morrison in the lead at the drop of the green flag followed by third place starter Jim Normoyle. On lap eight, 12th place starter Nick Stone was in the top five after getting by Ivan Joslin and one lap later Normoyle took the lead away from Morrison on the outside of turn four.

On a restart after a lap 10 caution, Stone took the second spot away and on lap 13 Stone was the race leader after making a pass on the leader on the inside of turn three. One final caution slowed the event with two laps to go allowing Normoyle to close in for a final chance at the win.

Stone pulled away on the restart to his second win of the season and the 48th of his career in the division over Normoyle, 16th place starter Josh Coonradt, 10th place starter Kenny Gates, and 11th place starter and defending track champion Luke Horning.

Ken Hollenback led all 15 laps in the Four Cylinder Cruiser feature event for his 52nd career win in the division in the SOHC followed by Dale VanAllen, John Napoli (DOHC winner), Zach McSpirit, and Shawn Hemstreet.

Fonda Speedway will be back in action this Wednesday, July 1 with the Firecracker 50 for the Sunoco Modifieds along with the Swagger Factory Apparel Crate 602 Sportsman who will also be in action with racing starting at 7:30 p.m. 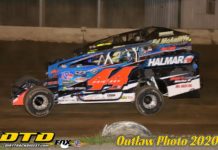 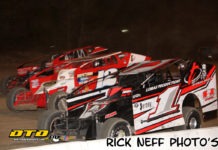