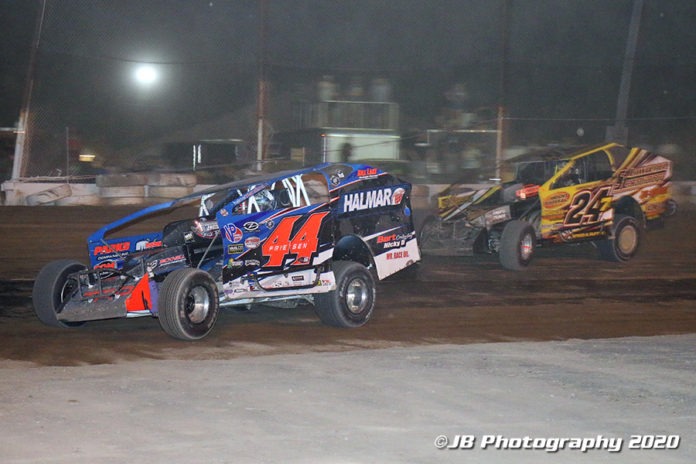 On Saturday, August 1 the Fonda Speedway was back in action after a two week break and history was made that night by the Friesen family, Stewart, and Jessica. Stewart won his sixth feature event of the 2020 season at Fonda and the 66th of his career at the “Track of Champions” in the Sunoco Modified division moving him into sole possession of fourth place on the All Time Win List. He also has single wins during his career at Fonda in a 360-Sprint Open event along with one victory each in both the Empire Super Sprints (ESS) and Patriot Sprint events.

Jessica on the other hand finished second behind her husband last Saturday at Fonda after both started back in the sixth row of the 30-lap main event. That was the first time in Fonda Speedway history that a husband and wife have finished first and second in a feature event at the “Track of Champions”. Jessica also has a victory at Fonda in a 360-Sprint Open event along with a win in an Empire Super Sprint (ESS) event during her racing career at Fonda.


And the talk of the week has probably been what if there were a caution last Saturday in the feature event at Fonda? Could Jessica have possibly beat her husband? Can she do it this Wednesday and collect “Mimi’s Bounty” which is a bounty started by Mimi Lazzaro for anyone who can beat Stewart at Fonda this Wednesday? It will be a great time to get the event live on Dirt Track Digest TV and find out if Jessica or anyone else can beat Stewart at his home track.

One thing is for sure, Stewart and Jessica are both great drivers who put on a great show for the fans who watched the event live on Dirt Track Digest TV last Saturday evening. And if either one of them were to win on Wednesday their son Parker would put on a show of his own in the Fuccillo Automotive Group Mike Cole Memorial Victory Lane!

On Wednesday, August 5 the Sunoco Modifieds will race 30 laps for a minimum of $3,000 to win. Drivers pre-registering for the event will receive an additional $711 in their pay envelope for a total of $3,711. Drivers can “cash in their chips” and pre-register by e-mailing the speedway at fondaspdwy@gmail.com. There is no cost to register for this event in advance. Modified heat winners will each receive $50 courtesy of Tyrell Racing.

All events will feature draw for starting positions with a redraw of top qualifiers for the main events. 25 show-up points will be awarded to track regulars attempting to qualify.

As stated earlier, Mimi Lazzaro has started a bounty on Stewart Friesen named accordingly as “Mimi’s Bounty” for anyone who can beat Stewart at the Fonda Speedway on Wednesday, August 5. Anyone wishing to participate can reach Mimi on her Facebook page.