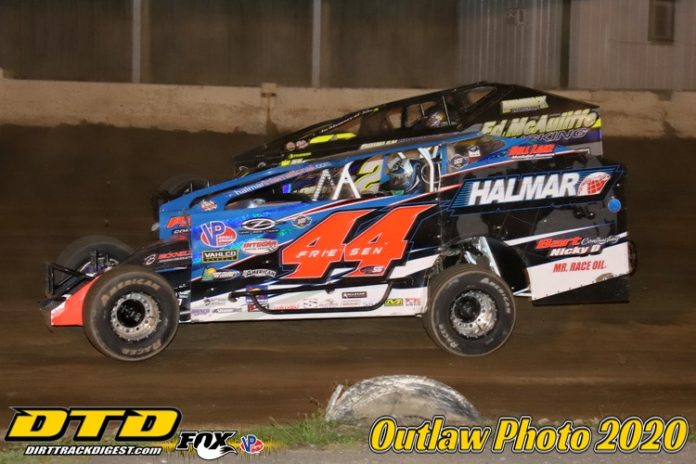 FONDA, NY – After a challenging heat race, Stewart Friesen started deep in the field. With a 16th starting spot, a heavy track, and a quality field to pass in only 30 laps, the odds were stacked against Friesen and the field was ready to claim a $1,200 bounty. However, Friesen made quick work of the field, taking the lead on lap nine and storming off to his sixth win in six tries this season at Fonda Speedway.

Front row starters Adam McAuliffe and Rocky Warner had very different fortunes, with McAuliffe leading and Warner breaking on the opening lap. Cautions flew often in the early stages, one of which on lap three allowed Billy Decker to get by McAuliffe for the lead on a restart. With restarts come passing opportunities, and Friesen was using all of them, driving from 16th into the top five by lap six.

On a lap eight restart, David Schilling moved into second, with Friesen following for third. McAuliffe dropped to fourth, then dropped off the pace and surrendered his good run with a trip to the pits. Friesen disposed of Schilling on the restart, then drove under Decker to lead lap nine.

The field started to settle into a green flag feel, allowing Friesen to flex his muscle. By halfway, Friesen had a 2.5 second lead over Decker, Schilling, and Mat Williamson from the rear after a lap three flat. Following an extended battle, Williamson took third from Schilling, right before a lap 21 yellow.

Despite the reset, Friesen once again flew away from Decker and Williamson. Williamson couldn’t do much with Decker, while Schilling now had to fight off Mike Maresca. Maresca grabbed the spot on lap 24, and Schilling headed to the pits a lap later.

Out front, Friesen distanced himself from everyone else, climbing to a four second lead in the waning stages. With the checkered falling after 30 hard laps, it was Friesen winning over Decker, Williamson, Maresca, and Danny Johnson in Wes Moody’s #24.

“That was a challenging track, but we got such a competitive team,” Friesen said. “Jay Castimore is a genius with the tires and he made the right calls tonight. I know everyone hates us stinking up the show, but we’re not done yet and we’ll be here on the 15th to try and make it a sweep of the points season. I didn’t think we brought the right combination tonight, but once I found the right lane we were able to make it work.”