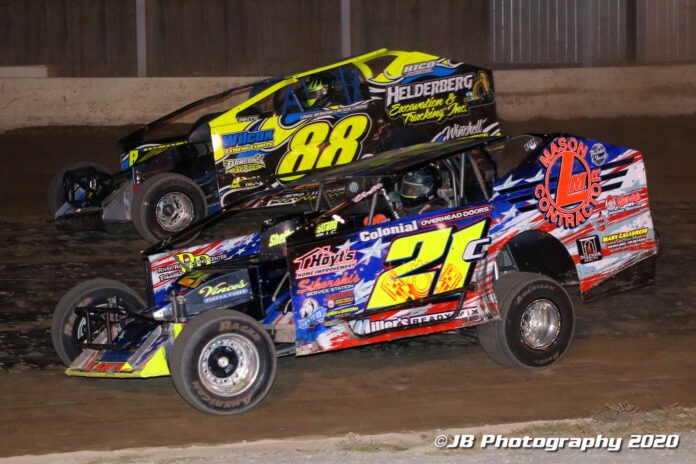 FONDA, NY – The Hard Charger Award is one that often maybe overlooked if it is offered at all at your local speedways. If you really think about it, it is a special award to receive because it shows not only the talent of the race car driver to come through the field after a poor qualifying effort, but also the talent and knowledge of the car owner and pit crew who adjust the race car before feature time to make it competitive.

For the last two years at the “Track of Champions” Fonda Speedway, Frank & Jason Greco of Greco’s NAPA Auto & Truck Parts which is located at 6014 NY Rt. 5 in Palantine Bridge, NY have presented the NAPA Hard Charger Award to the driver who advances the most positions in the Swagger Factory Apparel Crate 602 Sportsman division. They will again be handing out the award in 2021, which consists of $100 gift certificate to their store.

The winner of the award is contingent on the Greco’s NAPA sticker being displayed on the race car with the recipients of the award in 2020 including the following drivers:

Without the benefit of sponsorship, racing events at your local speedways would not be possible so with that Fonda Speedway management would like to thank the following Marketing Partners for the 2021 season who are listed on the track website including American Racer, Lias Tire Racing Division, American Racer Cup, Sunoco Race Fuels, Bob Hilbert Sportswear Short Track Super Series, BD Brett Deyo Motorsports Media, A-Verdi Storage Containers, Recovery Sports Grill, and BBL Companies.

For 2021 the weekly division sponsors will include Sunoco Race Fuels distributed by Insinger Performance for the Modifieds, Swagger Factory Apparel for the Crate 602 Sportsman, Montgomery County Office for Aging for the Limited Sportsman, and the Algonkin Motel for the Pro Stocks. The Four Cylinder/Cruiser division is still available for sponsorship as of the writing of this release.

The Fonda Speedway Race Car Show will be held on Friday March 26 through Sunday March 28 at the Via Port in Rotterdam, NY with move in day on Thursday March 25.

As of the date of this release there are only 38 days left until opening day of the 70th consecutive season of racing at the “Track of Champions” Fonda Speedway. Palmer’s Service Center will sponsor the 2021 season opener at Fonda on April 17 with all divisions in action!