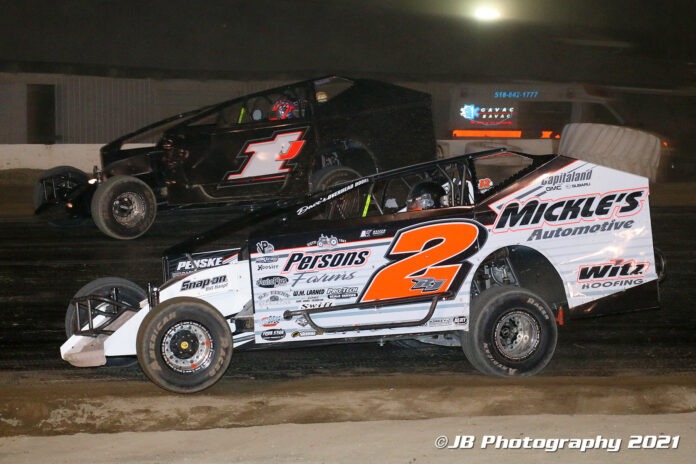 The $1,000 to win Algonkin Motel Pro Stock event will be race #3 of the American Racer/Lias Tire Super Six Series events with the first two races in the series being won by Nick Stone and Luke Horning.

LM Mason Contractors of Gloversville, N.Y., is boosting the Swagger Factory Apparel Crate 602 Sportsman payout for the Saturday, June 12 event at Fonda Speedway. The winner will receive a $300 bonus while the second and third place finishers will each receive a $100 bonus.

The drive-in section on the infield will also be open on Saturday June 12. Reservations for the drive-in section on the infield will be accepted in the order they are received. Follow the link https://docs.google.com/…/1FAIpQLScerD7698B789…/viewform in order to reserve your spot. $60/parking spot – includes 1-4 attendees of any age (ATTENDEES MUST ARRIVE TOGETHER – NO EXCEPTIONS). Reservations will be accepted until Thursday, June 10th at 8:00 PM, unless SOLD OUT prior. Credit card payment is required prior to the event. No refunds.

To be eligible for the NYSSCA awards you need to be a member of the NYSSCA organization but if you are not you may sign up with Fonda Speedway NYSSCA representative Bonnie Mortensen at the 1B & 1M trailers in the pit area where she will be until hot laps begin. Anyone is eligible to become a NYSSCA member for $25, which helps support the organization’s efforts. In addition to our “NYSSCA Night” at all our member tracks, we also offer a benefit fund to injured members. Any member who is out of work due to an injury sustained at a sanctioned racing event receives $125/week for up to 26 weeks once proper documentation has been received by the organization.

The competition has been hot and heavy at Fonda so far in 2021 with four different winners in nine events in the Sunoco Modified division led by Stewart Friesen with six wins; Rocky Warner, Jack Lehner, and Mike Mahaney all with one win apiece. For Lehner it was his first career win at the “Track of Champions”.

There have been eight events held in the Swagger Factory Apparel Crate 602 Sportsman division with six different winning drivers led by defending track champion Chad Edwards with three victories followed by Brian Borst, Jason Greco, Jason Reome, Tucker O’Connor, and Mark Mortensen who all have one win apiece. For Greco, Reome, and O’Connor it was their first career wins at Fonda.

There have also been six different winners in a total of eight events in the Algonkin Motel Pro Stock division led by defending track champion Nick Stone with three wins. Beau Ballard, Devon Camenga, Josh Coonradt, Luke Horning, and Kenny Gates all with one victory apiece. The wins for both Ballard and Camenga were the first of their career at Fonda.

In the Montgomery County Office for Aging Inc. Limited Sportsman Jeremy Tyrrell and Clayton DuMond both have two victories apiece while Carter Gibbons, Stephen Gray, Kyle Dingman, and Taylor LaPlante all have one win apiece for a total of six different winning drivers in eight events. For Tyrrell, Gibbons, Dingman, LaPlante, and DuMond it was their first career victories at Fonda.

In the Fonda Fair Four Cylinder DOHC division there have been three different drivers winning a total of eight events led by Slappy White with four wins followed by Tyler White with three victories, and Kerrie Hollenback with one win. For both Slappy and Tyler White it was their first career wins at Fonda.