FONDA, NY – A-Verdi Storage Containers will present the racing action at the “Track of Champions” Fonda Speedway this Saturday, June 26 featuring the first appearance of the season for the Patriot Sprint Tour 360 Sprint Cars in a $3,000 to win and $300 to start main event.

The infield drive-in will be open ($70 for up to four passes) and you can register for a spot by going to https://fonda-speedway.ticketleap.com/drive-in-request…/


The Fonda Speedway Kid’s Club will also be holding their annual bicycle giveaway so if any race teams or anyone else is interested in providing a bicycle for the giveaway you can contact Ashley Abeling on Facebook or just bring a bicycle with you to the track on Saturday. The Kid’s Club is located underneath the grandstands at gate two (down towards turn four) at the east end of the covered grandstands.

With permission from Mike Emhof of the Patriot Sprint tour, here is Earl Halaquist as Remembered by Michael Monnat.

By the ﬁrst time I saw Earl Halaquist race a sprint car for the United Racing Club (URC) in 1960 at the Five Mile Point Speedway in Kirkwood, New York, he was already half-way through his career. Yet, at that point, he hadn’t even begun to receive national notoriety. That all changed with the dawn of the Sixties and his prodigious and overwhelmingly spectacular use of George Nesler’s sprint car racing equipment.

Halaquist had been around the sprint car game since arriving home after serving in the U.S. Navy in World War II, making his debut in 1946 in Little Valley, N.Y. From that point forward through the Fifties, he raced with sanctions like the Eastern States Racing Association (ESRA), the Big Car Racing Association (BCRA), and URC.

Back to that July night at Five Mile Point, Halaquist didn’t win the feature, but he was impressive getting a second place ﬁnish behind Hal Rettberg. That was only the beginning as the decade that changed the country belonged to the Earl Halaquist/George Nesler duo.

Six URC titles (1962, ’64, ’66, ’67, ’68, ’69) impressed the hell out of me and, during that time; I caught every local show and went to a few regional shows, as well. Halaquist won on dirt and asphalt. He won on the big tracks and the bullrings. In short, he won on everything and everywhere; he won 14 features in 1967 alone. Along the way, he garnered 52 URC main events; most coming at a time when ‘having a roof over your head’ meant living at home.

In 2010, he was posthumously inducted into the URC Hall of Fame. His many skills spoke for themselves and everything about him read ‘class act.’ Earl Satch Halaquist, who was born on September 7, 1925, in Rock Rift, N.Y., died on January 12, 2001, at the age of seventy-ﬁve. Great driver, great man. Nothing else needs to be said!

Thomas Schmeh is once again putting together a lap sponsorship program for this coming Saturday’s Earl Halaquist Memorial at the Fonda Speedway! If you are interested in sponsoring a lap, please contact him or a PST official. Laps are $20 each. 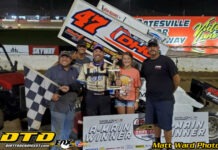