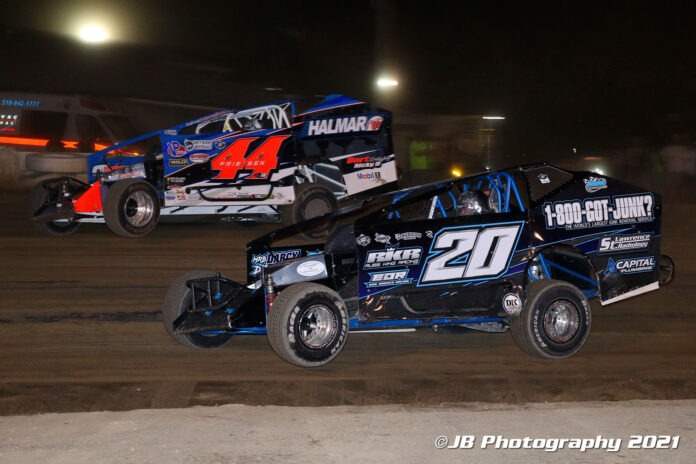 FONDA, NY – Starting 12th on the grid for the 30-lap Sunoco Modified feature, Stewart Friesen did what he normally does, work his way to the front of the field. It didn’t come easily on a challenging track, but he wasn’t comfortable just staying in one lane and moved around as needed to get to the front.

“I just tried to move around a bit on a slick and technical track, but with the unique situation with tires I tried to keep the tires under me,” Friesen told Mimi Lazzaro in victory lane after the win.

For Friesen it was his seventh win of the 2021 season at Fonda and the 75th of his career at the “Track of Champions” Fonda Speedway in the Halmar International sponsored #44 Bicknell car.

Special thanks to Todd Cipperly of the Farmers Insurance Cipperly Agency of Central Bridge, NY for the giveaways to the fans at intermission that were tossed from the flaggers stand by Race Director Denny Tillison and Ed Biittig Sr.

With a great crowd on hand, Fonda Speedway announcer Chris Moore did the invocation and prayer followed by a great rendition of the National Anthem by Fonda Speedway head starter Joe Kriss.

Adam McAuliffe and Pep Corradi started the Sunoco Modified feature on the front row with McAuliffe the early race leader. Bobby Varin started the event in the fourth position and moved to the second spot on lap three after getting by Corradi with Jack Lehner and last weeks winner Rocky Warner completing the top five.

After starting 11th on the grid Warner was moving to the front quickly, getting by Varin for the second position on lap seven. On lap nine, McAuliffe held a straightaway lead with Stewart Friesen now in the top five in the fifth position. At the halfway point, McAuliffe, Warner, Friesen, Varin, and Lehner were the top five cars in the event.

Friesen made his way in between both a lap car and McAuliffe for the lead in turn two on lap 23 with Warner also getting by McAuliffe for the second position with three laps to go. At that point Friesen pulled away to a big lead and yet another feature win followed in the top five by Warner, McAuliffe, Lehner, and Varin.

“I snuck by Adam (McAuliffe) and a lap car to get the lead but tonight I really wanted to come to Fonda and get the job done,” Friesen said in the Fuccillo Autoplex of Nelliston Mike Cole Memorial victory lane after both he and his son Parker celebrated the win on the roof of the race car. “We have a big week ahead of us with Fourth of July coming up and this week has been a big one for us as well with Parker graduating Pre-K earlier this week.”

The 25-lap Swagger Factory Apparel Crate 602 Sportsman feature began with a caution before any laps were completed after outside front row starter Kurtis Hohensheldt spun in turn one just after the green flag had dropped. Hohensheldt restarted at the rear of the field on the original restart.

Dan Santabarbara led on the second try at the start with Griffen Mansmith second early on. Fourth place starter Brian Borst moved past Mansmith for the second position on lap four and on the outside of turn four on lap nine Borst was the new race leader. Borst and his crew were coming off a very busy week as they had to put a new car together after totaling a car last week and their hard work was paying off.

One lap after taking the lead, Borst turned his car around in turn one on the very slippery surface, bringing out the caution and placing Santabarbara back on the point. Santabarbara wouldn’t lead another lap however as fifth place starter Brian Calabrese took the lead on the restart.

Point leader Cody Clark had a very rough night with issues in hot laps forcing him to miss the heat race and the consolation and take a provisional spot to get into the feature event. On lap 11 his miserable night came to an end after being involved in a five-car wreck in turn one, nobody was injured in the wreck, but Clark and others were done for the night at that point.

Calabrese kept Hartman Jr. behind him over the remaining laps to get his first win of the season and the fifth of his career in the division in the LM Mason Contractors #21C followed by Hartman Jr., Burton, Edwards, and Dwyer.

“We’ve been struggling this year and I honestly didn’t think I was gonna get to victory lane this year,” an emotional Calabrese said in victory lane. “We have had a lot of bad luck so far this year, some of it self-inflicted, but we have been working so hard and I knew that I had to put my helmet on and get to work. I am excited about the rest of the season; we have a good piece here.”

The Algonkin Motel Pro Stock feature was one of if not the best feature of the night with Frank Hoard Jr. leading at the drop of the green flag after starting the 20-lap event on the pole. Sixth and eighth place starters Josh Coonradt and Kenny Gates were the new fourth and fifth place cars respectively on lap four with Coonradt up to second four laps later after getting by Bill Knapp.

Coonradt was the new race leader on lap eight after getting by Hoard on the outside of turn four with 10th place starter Nick Stone now the second-place car after he also got by Hoard. Stone led the event for two laps just after the halfway point with ninth place starter Luke Horning now pressuring Stone for the top spot.

Horning used the inside groove out of turn four to lead lap 15 but when he and Stone and Coonradt went three wide for the lead three laps later, Stone took the lead away. Stone and Horning remained side by side over the final five laps, but Stone held on for the win followed in the top five by Horning, Coonradt, Gates, and Shane Playford.

Kyle Dingman led all 15-laps in the Montgomery County Office for Aging Inc. Limited Sportsman feature for his second win of the 2021 season and the second of his career over Jeremy Tyrrell, Stephen Gray, Clayton DuMond, and Carter Gibbons.

Ken Hollenback (SOHC) led only one lap of the Fonda Fair Four Cylinder feature, but it was the most important one as he won by a nose after a four-wide race to the checkered flag to the overall race win. Slappy White was declared the winner in the dual cam class with John Napoli, Kerrie Hollenback, and Jeff Tubbs completing the top five.

Danny Varin led the first two laps of the 30-lap Earl Halaquist Memorial Sprint Car event until Paulie Colagiovanni took over the lead and led the remaining laps for the $3,000 to win event. Varin, Davie Franek, Jordan Thomas, and Chad Miller completed the top five. For the complete race story on the event please go to www.patriotsprinttour.com

Next week at the Fonda Speedway a special two-day weekend of events will take place at the “Track of Champions”. On Saturday, July 3 the Recovery Sports Grill will sponsor Hall of Fame Night featuring the Thunder on the Thruway Series “Red, White & Blue” $4,000-to-win Sunoco Modified feature, $1,500 to win Swagger Factory Apparel Crate 602 Sportsman feature, a $1,000 to win Algonkin Motel Pro Stock feature along with all other regular divisions plus the Mohawk Valley Vintage Dirt Modified Series.

Then on Sunday, July 4 the Fuccillo Automotive Group will present the Bob Hilbert Sportswear Short Track Super Series (STSS) Fueled by Sunoco Modified “Firecracker 50” $10,000 to win plus the STSS Crate 602 Sportsman $2,000 to win event (show-up points for both divisions) along with a FIREWORKS EXTRAVAGANZA*

1st win of 2021 and the 5th career win in the division for Calabrese.

8th win of 2021 for Ken Hollenback and the 63rd of his career in the division.