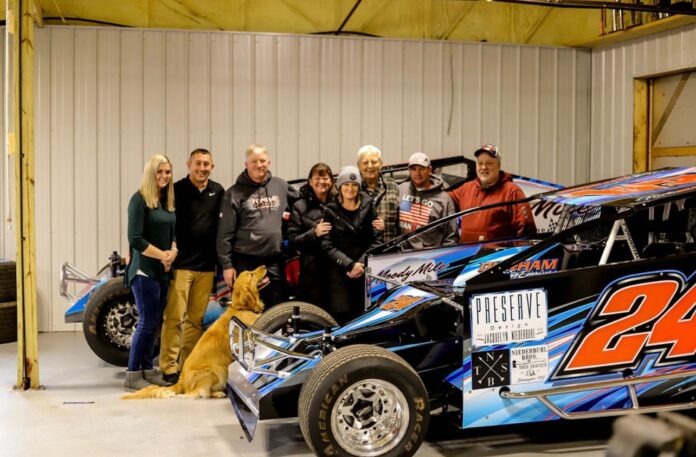 FONDA, NY – Wes Moody, of the Moody Mile fame for being the first car to break 100 mph at the legendary Syracuse mile racetrack, has been involved in racing since 1957. In his 65 years of racing involvement, he raced at 45 different racetracks with 25 different race cars on both asphalt and dirt surfaces for various sanctioning bodies.

Wes also promoted and managed racetracks and most recently has been an active modified car owner. With his stepson Patrick Dupree at the helm, they had great success racing DIRT modifieds on asphalt. They secured several track championships at Airborne Speedway in Plattsburgh, NY where they remain the winningest modified driver/owner team on asphalt. While most men his age are retiring, Wes is gearing up for the 2022 season with a two-car modified team.

Longtime family friend and no stranger to racing, George Foley of Bloomingdale, NY will once again chauffer the #24F. George has raced everything from go-carts to four-wheelers to snowmobiles since he was a kid. He has most recently been racing modifieds on dirt and asphalt with multiple feature wins as well as an Airborne Speedway Track Championship.

2021 was Foley’s first full season of racing at the “Track of Champions” Fonda Speedway, finishing 19th in the final point standings with one heat race victory to go along with two top five, three top ten, five top fifteen, and nine top twenty finishes in Sunoco Modified feature events. Foley also did what many others failed to do when he qualified for the prestigious Fonda 200 in September of last year, finishing the event in the 30th position.

New to the Moody Mile Motorsports Racing Team for 2022 will be Nick Heywood of Plattsburgh, NY. who will be moving up from a very successful career in the Sportsman division. After starting his racing career in a Go-Kart at age eight and winning over 150 races and 12 track championships, Heywood moved up to the Renegade division at his home track Airborne Speedway as soon as he was allowed to race “cars” at age 16. Four years later, Heywood moved up to a Sportsman class which was basically a “Pro Stock” on asphalt, racing that class for a couple of years.

When Mike Perrotte brought the Sportsman Modified division to Airborne on asphalt, Heywood moved up to that class and won five straight Track Championships. In 2014, Airborne switched to the NASCAR banner as a NASCAR Home Track and Heywood won the NASCAR Home Tracks National Rookie of the Year, finished 12th in the Nation, and second in New York State to the one and only Stewart Friesen!

With new Teo Chassis and engines from Durham Racing Engines out of NC and longtime engine builder/good friend Andy Costello, Wes is looking forward to the upcoming race season. He feels that with new equipment and dedicated drivers, he has the strongest team that he has had in years, and he is anticipating a successful season. The team will race at the Utica Rome Speedway on Friday nights and the Fonda Speedway on Saturday nights. Back in his racing days, Fonda was always one of Wes’ favorite racetracks.

The Fonda Speedway will open their 2022 campaign with the Fonda Speedway Car Show at the ViaPort Mall in Rotterdam, NY on March 25-27 followed by an Open Practice session on Saturday, April 9. Palmer’s Service Center will present Opening Night for the 71st season of competition at the Montgomery Fairgrounds facility on Saturday, April 16 with all divisions in action and points beginning in all classes.

The Utica Rome Speedway will open their 2022 season on Friday, April 29 with the “Honoring Alex” Season Opener in Memory of Alex Friesen. All divisions will be in action with points beginning for all classes.

Be sure to keep an eye on the track websites www.uticaromespeedway.com and www.thefondaspeedway.com for more announcements regarding the 2022 racing season along with the tracks Facebook pages.