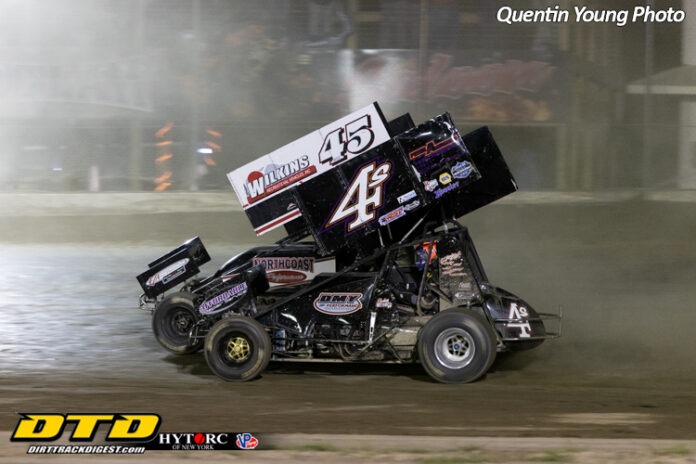 SELINSGROVE, PA- After finally getting the season off the ground a few weeks ago at Outlaw Speedway, the A-Verdi Storage Containers Patriot Platinum Tour will have its second event in 2022 at Selinsgrove Speedway this Saturday, June 11, for the 19th Annual Joe Whitcomb Memorial. This will be the seventh event where the Patriots sanction the race.

It will be the first of three events in June, where the series will also make visits to Utica Rome on Friday, June 17, and Fonda Speedway on Saturday, June 25.

In the season opener, it was a former champion, Davie Franek, picking up his first win of the season at Outlaw Speedway over Paulie Colagiovanni and Dylan Westbrook. Rookie Dalton Rombaugh was fourth, followed by the reigning champion, Jordan Thomas completing the top five.

Although Selinsgrove does not race 360 Sprint Cars weekly, there are still a ton of heavy hitters that bring a lot of speed to the track, including Jason Shultz, Ryan Kissinger, Mark Smith, and Derek Locke.

The track will also be racing in memory of Joe Whitcomb, a dedicated racer at Selinsgrove since 2001 in the 358 Sprint Car division. Unfortunately, Whitcomb passed away in 2003, but his legacy remains with this race every year. Last season, Ryan Taylor bested the field and became the ninth different event winner.

The Whitcomb memorial is also special with the unique format it presents for the 360 drivers where time trials set the running order. Time trial orders are decided via an open draw before the PST driver’s meeting. Each car will get one lap timed, and the 12 fastest drivers will be inverted, meaning the quickest driver will start fourth in heat one, the second-fastest will start fourth in heat two, and so on.

The heats will be eight laps in distance, and the top six will qualify and line straight up based on finishing order by heat race finishes. The fastest driver in time trials will draw a 3, 6, or 9, which will set the running order for the A-Main, which will be 25 laps in the distance. Drivers who finish outside the top six in their heat races will start based on finishing position during qualifying.

Technical Information for Saturday’s race on www.patriotsprinttour.com under the rules bulletin.