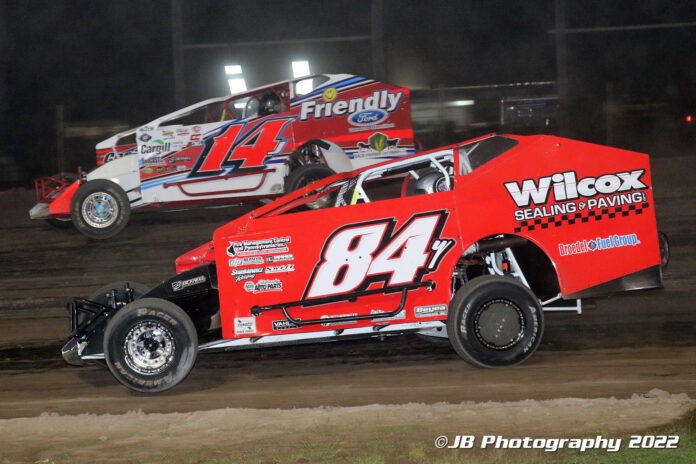 On Friday night (July 1), Parks Companies presents Round No. 3 of the F.X. Caprara Car Companies Thunder on the Thruway Series, the kickoff to a huge weekend of racing on the New York State Thruway.

The six-race mini-series between Utica-Rome and Fonda Speedway (Fonda, N.Y.) reaches the halfway point of the season, with Round No. 4 of the series coming the following day (July 2) at Fonda.

Friday night at Utica-Rome kicks off a three-race weekend with $18,000 in prize money available for Sunoco Modified winners at the two BD Motorsports Media LLC speedways.

Utica-Rome’s Friday program pays the Sunoco Modified victor a healthy $4,000 at the end of 30 laps.

The Worthington Industries Crate 602 Sportsman ($1,500 to win) and Next Generation Graphix Pro Stocks ($1,000) join the program with Round No. 3 Thunder on the Thruway Series.

A huge fireworks display – the largest in the area – is set for Friday night as well.

On Sunday (July 3) Fonda Speedway comes back to life for a 50-lap, $10,000-to-win main event as part of the Bob Hilbert Sportswear Short Track Super Series (STSS) Fueled By Sunoco.

The ‘Firecracker 50’ concludes the potential $18,000 weekend for one Modified driver, should any be able to sweep the three nights of racing.

The STSS Crate 602 Sportsman and a fireworks display will join Sunday’s program racing for $2,000 to win.

The entire weekend of racing will air live and on-demand on FloRacing (www.floracing.tv).