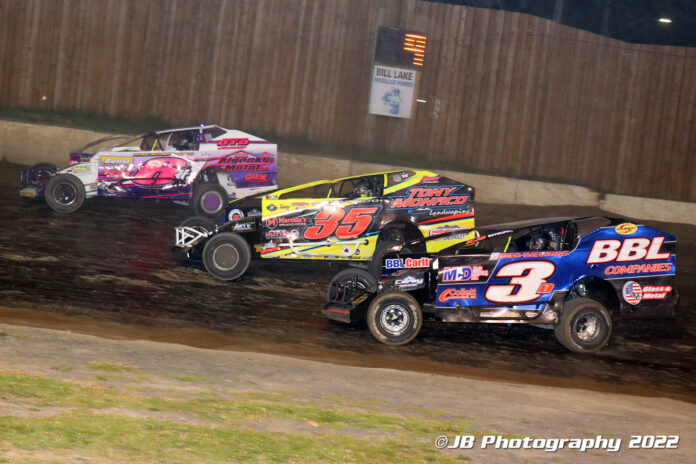 FONDA, NY – Last week Matt DeLorenzo and his crew chief, his brother Mike DeLorenzo, learned what a little change can do to your racecar. This week they used that lesson to dial the BBL Companies #3D Bicknell car back to early season form when he won three feature events at the “Track of Champions” Fonda Speedway.

“Mike did a lot of studying over the winter to try to figure out the springs and shocks,” DeLorenzo told Mimi Lazzaro in victory lane. “We learned that you can make a little bit of an adjustment and throw yourself off like we did last week when we tried to tighten the car up and it was way too tight, and I couldn’t drive it. But it was definitely on tonight.”

Earlier in the day at the Fonda Speedway Hall of Fame & Museum the 2022 class was inducted which included drivers AJ Romano, Tim Clemons, and Steve Welch along with car owner Jeff McWalker. The 6th Annual Dedication to the Fonda Speedway Museum Award was also given to Alton & Carole Palmer and the Eagles Club 3846 of Canajoharie, NY.

Special thanks for some bonuses that were paid out on Saturday evening at Fonda including in no particular order RCK Motorsports who paid out $50 to each of the Algonkin Motel Pro Stock heat race winners, the Man with the Red Chair who paid out $100 to feature finishing positions 2-11 in the Algonkin Motel Pro Stock feature, and Upstate Auto who donated $50 to both the single overhead and dual overhead cam feature winners in the Fonda Fair Four Cylinder feature.

Hall of Fame announcer Jim King was on hand with Chris Moore to handle the announcing duties on Saturday while Dan Haslun was on the mic for the Mohawk Valley Vintage Dirt Modified Series (MVVDMS). Pastor Greg Nitz said the prayer during opening ceremonies while Joe Kriss performed the National Anthem. Ther winner of the 50/50 was Harry from Canajoharie who took home $3,096 thanks to the hard work of the 50/50 girls Rose, Julie, and Heather!

A draw for starting positions in the 30-lap Thunder on the Thruway Series Sunoco Modified feature event put heat race winner Mike Mahaney and Pep Corradi on the front row for the start of the feature with Mahaney taking the early lead. Seventh place starter Matt DeLorenzo was already up to the fourth position on lap three while Mahaney was out to a straightaway advantage over Corradi two laps later on lap five.

DeLorenzo took the second position away from Corradi on lap seven with Mahaney now in lap traffic allowing DeLorenzo to close in quickly on the leader. DeLorenzo took over the lead two laps later with a quick move on the inside of both a lap car and Mahaney and stretched out his lead to almost a half-track with ten laps to go despite heavy lap traffic throughout the rest of the event.

“My car was really good off of turn two, getting a lot of bite on the outside, DeLorenzo said afterwards. “The lap cars were brutal, I didn’t know how close he (Mahaney) was after I got by him and then I was lapping some pretty good cars, so I was praying for no cautions.”

The top five at the halfway point in the event consisted of DeLorenzo, Mahaney, Corradi, Ronnie Johnson, and David Schilling. Ronnie Johnson was the new third place car on lap 16 after getting by Corradi for the position with 15th place starter Rocky Warner, who was in a #16 tribute car to 2022 Fonda Speedway Hall of Fame inductee AJ Romano, taking the fourth position away from Schilling on lap 24.

With DeLorenzo out to a comfortable advantage over Mahaney and Johnson, the focus turned to Warner, Schilling, and Alex Yankowski who were battling side by side in lap traffic for the fourth position. When Joe Kriss waved the checkered flag at the end of thirty laps DeLorenzo crossed the finish line first for his fourth victory of the season and the 41st time of his career at Fonda followed by Mahaney, Johnson, Warner, and Yankowski.

“Hats off to my brother Mike who has these cars dialed in with Brian (Gleason) winning last week for his first career win,” DeLorenzo said. “We ran at Albany Saratoga last night and here at Fonda tonight with the same car, we worked on it all day today to get it ready for tonight and I am really looking forward to the “Firecracker 50” tomorrow.”

A draw for starting positions determined the starting lineup for the 25-lap Thunder on the Thruway Series Swagger Factory Apparel Crate 602 Sportsman feature with Jason Reome leading at the drop of the green flag from his outside front row starting spot followed by fourth place starter Cody Clark in second.

Third place starter Payton Talbot and 12th place starter Chad Edwards both moved past Cory White for the third and fourth positions by lap eight with Reome now in lap traffic. The top three of Reome, Clark, and Talbot were racing hard for the lead on lap ten just before the caution was out for Clayton DuMond who was facing the wrong way on the backstretch.

Clark took over the lead on the restart coming out of turn two with Edwards and Talbot also getting by Reome for the second and third positions. At the halfway point the top five consisted of Clark, Edwards, Talbot, Chip Constantino, and Reome with Clark now out to a straightaway lead.

After starting back in the 15th position, Mark Mortensen moved in to the top five with five laps to go with Clark going three wide at times to stay ahead of Edwards and Talbot who without the benefit of anymore cautions were never able to close in to challenge for the lead. Clark went on to his third win of the season and the 16th of his career in Upstate Motorsports #4 DKM car followed by Edwards, Talbot, Constantino, and Mark Mortensen.

“The track was definitely tricky tonight,” Clark said after the win. “Early on the car was real good, we threw some different stuff at it just trying to develop and get even better but all in all the car was good. I just couldn’t get through lap traffic the way that I wanted to, I couldn’t roll the corner like I wanted to that’s what made it tough.”

Ivan Joslin started the 20-lap Thunder on the Thruway Series Algonkin Motel Pro Stock feature on the outside of the front row and took the lead at the drop of Joe Kriss’ green flag. Luke Horning started the event in the fifth position and got by AJ Walters for the third position on lap two and one lap later Horning was the new second place car after getting by Gary Silkey,

Sixth place starter Chuck Dumblewski got around the outside of both Jason Morrison and Horning for the second position on lap seven with the caution coming out shortly afterwards for Randy Cosselman who spun in turn four. On the restart, Dumblewski took away the lead from Joslin who dropped out of the event on lap 11 while in the top five.

Kenny Gates brought out the final caution of the event on lap 13 when he came to a stop in turn three while Dumblewski continued to lead on the restart. Tenth place starter Nick Stone was in the second position for this restart with Dumblewski choosing the outside for the restart. When the green flag flew Dumblewski was about as high as you could go on the track while Stone was looking for any way that he could to get by for the lead.

That’s exactly what happened with two laps to go when Stone got by Dumblewski on the inside of turn four and went on to his ninth win of the season and the 68th of his career over Dumblewski, eighth place starter Beau Ballard, Horning, and Morrison.

“A second-place finish would have been great there, that was an awesome race,” Stone said in victory lane. “The slicker the track gets it is an equalizer so nobody really has much over anybody and it is up to whoever can be the smoothest or find a little bit of bite to get off the corners. I think after showing the nose to Chuck that he wasn’t hitting his marks like he was before the caution because there was no catching him before that.”

Michael Kalkbrenner started the Montgomery County Office for Aging Inc. Limited Sportsman feature on the outside of the front row and was the race leader at the drop of the green flag. Fifth place starter Connor Prokop moved through the field to the second position with only a few laps remaining and on lap 12 took over the lead on the inside of turn two.

Prokop went on to his second win of the season and the second of his career at Fonda in the Eagle Towing & Recovery sponsored #12P over seventh place starter Zach Dufel, Kalkbrenner, Lance Hill, and Walter Cook.

“After wrecking last week this is special,” Prokop said in victory lane. After extensive tech after the win Prokop said, “I wasn’t real worried because I knew that our car is legal.”

Kerrie Hollenback went on to his seventh win of the season and the 29th time in his career at Fonda in the DOHC Fonda Fair Four Cylinder division while Todd Morey took the win in the SOHC class for his first career win in the division at Fonda. Morey’s excitement showed just how much it meant for him to be in victory lane at the “Track of Champions” Fonda Speedway.

“I was six months old in diapers with my dad when he brought me here,” a very excited Morey said in victory lane. “I’ve been here my whole life, went and did the Monster Truck stuff and got some wins, then came back here and announced with Jim King at sixteen years old. I am so happy right now, I WON AT FONDA SPEEDWAY Morey shouted!

The Independence Holiday weekend action continues at the Fonda Speedway today Sunday, July 3 when the Bob Hilbert Sportswear Short Track Super Series (STSS) Fueled by Sunoco heads to the “Track of Champions” for the fourth edition of the “Firecracker 50.”

The STSS big-block/small-block Modifieds will take the stage on Sunday for a 50-lap, $10,000-to-win affair in Round No. 6 of the River Valley Builders Modified North Region. Fonda Speedway plays host to its fifth STSS event in the last four years, with the sixth event coming this September for the “Fonda 200.”

Sprakers, N.Y.’s Stewart Friesen remains undefeated in STSS competition at the Fonda Speedway, winning all three previous renditions of the “Firecracker 50,” plus the 2021 “Fonda 200,” which fell under STSS sanctioning.

1st career win in the division for Morey (SOHC)