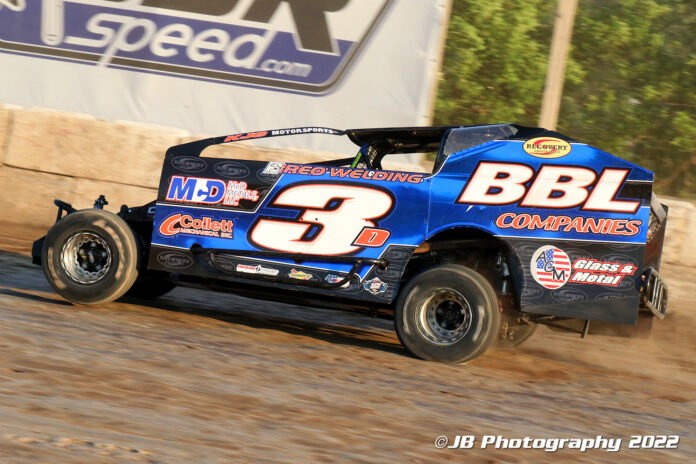 FONDA, NY – Samson Motorcar sponsored the $5 admission “Fan Appreciation Night” at the Fonda Speedway on Saturday evening and when the checkered flag flew on the Sunoco Modified feature event it was Matt DeLorenzo scoring his fifth win of the 2022 season and the 42nd time in his career at the “Track of Champions”.

“You’re making me sound old,” DeLorenzo joked with Mimi Lazzaro in victory lane. “Hats off to my brother again and my whole crew, my other brother is here with us tonight and Kevin from KJG Motorsports who has stood behind me for my entire career is also here tonight so that is pretty cool.”

The 17th Annual Hondo Classic for the Algonkin Motel Pro Stocks was also held on Saturday at Fonda with Beau Ballard getting his first win in the prestigious event along with his first win of the 2022 season at Fonda and the second of his career in the division at the “Track of Champions”. The 1st Annual Bobco (Bob James) Dash for Cash was also held in conjunction with the Honda Classic with Nick Stone taking the win in that event. A separate press release will follow this one for the prestigious Hondo Classic event.

Congratulations to Jeff from Johnstown who was the winner of the 50/50 worth $3,080! As always great job by Julie, Rose, & Heather.

After a prayer from Pastor Greg Nitz and a fantastic rendition of the National Anthem by Mimi Lazzaro the first green flag of the event was thrown in the 30-lap Sunoco Modified feature event with Nick Heywood leading from his pole position start followed by division rookie Tucker O’Connor.

DeLorenzo was the new third place car on lap 18 while Hanson and Drellos were waging a war for the lead in the event. Drellos made a slide job pass of Hanson for the lead in turn two on lap 19 with Hanson returning the favor in turn four to hold on to the lead at the completion of the lap. Then things started to get very interesting.

Drellos had a great run in turns three and four and was alongside of Hanson for the lead in turn four with Hanson then switching lanes to try to block the move putting Drellos into the front stretch wall. Both cars continued on but going into turn one Drellos got too close to the inside burm and made contact with it with his left front, darting his car to the right and coming in contact with Hanson’s left rear spinning out the car #20C and bringing out the yellow.

Hanson restarted at the rear of the while Drellos drove to the pit area, not sure if officials sent him there or he did it on his own, but he was done for the night after a great run. After watching all of the action going on in front of him, DeLorenzo was handed the lead after the spin by Hanson and chose the inside for the restart with Warner the new second place car.

“I was catching the top two a little bit I thought, and then I don’t know what happened in turn one, but I saw Hanson spin and barely missed him,” DeLorenzo said after the race. “But luckily I did miss him and was able to get by him.”

One more red flag slowed the field on the restart after a multi car wreck mid pack but when the green flag flew again for the final ten laps it was a two-car battle between DeLorenzo and Warner for the win. A quick pass to the inside of the lap car of Don Bellen and then to the outside of another lap car Dylan Scribner in turns one and two sealed the win for DeLorenzo who went on to the win in the BBL Companies #3D Bicknell car powered by an Enders Big Block.

“The car was really good before the red flag,” DeLorenzo said in victory lane. “But then the lap cars got me a little bit and fortunately I was able to get through them okay. We’re on a roll, we had to change a radiator in the car this afternoon which had a crack in it from last night, so hats off to everybody on my crew it’s a lot of fun. These coil cars, you can dial yourself out in a hurry, we thought that we made the right adjustment last Sunday and I was horrible but tonight it ran real good.”

The 25-lap Swagger Factory Apparel Crate 602 Sportsman feature was run green to checker with outside pole position starter Brendan Gibbons leading at the drop of Joe Kriss’ green flag. Fifth place starter Mark Mortensen was the new fourth place car on lap five and just before the halfway point in the event Mortensen was in the third position after getting by Cory White.

At the halfway point in the event Gibbons had a comfortable lead over Gray, Mortensen, White, and Dwyer but lap traffic started coming into play a couple of laps later. On lap 15, 12th place starter Payton Talbot was in the top five and one by one passed White, Mortensen, and Gray for the second position.

Gibbons continued to run the bottom as he did all race long but so was the lap car of Taylor LaPlante allowing Talbot to get around the outside of both LaPlante and Gibbons for the race lead on lap 21. Talbot led the remaining laps of the event in the Ted’s Body Shop, Hig Fab #14T powered by a Donath Crate Motor followed in the top five by Gray, 15th place starter Chad Edwards, Gibbons, and Mortensen.

“Once we found the top it was good,” Talbot said in F.X. Caprara Victory Lane. “I was kind of struggling on the bottom a little while. I got pinned down there for about ten laps I think but when we went to the top it was real good and I started going by people, it was just a great night. With crate racing it is so hard to make up ground so you gotta go anywhere somebody isn’t and when we switched up to the top it was a lot better.”

Ryan Sweet led the first 12 laps of the Montgomery County Office for Aging Inc. Limited Sportsman feature after starting on the pole with eighth place starter Zach Dufel the new second place car on lap five. Sweet led by a straightaway at that point with Dufel closing in on the leader with five laps to go.

Dufel took the lead away from Sweet with a pass on the inside of turns three and four with two laps to go and went on to his third win of the 2022 season and the third of his career in the division over Sweet, 12th place starter Connor Prokop, 11th place starter Josh Kane, and third place starter John Anderson.

Ken Hollenback continued his dominance of the Fonda Fair Four Cylinder division with his 11th win of the 2022 season in a single overhead cam while Dale VanAllen was the winner of the dual overhead cam class after finishing second overall for his first career win in the division at Fonda. John Napoli, Kerrie Hollenback, and Bruce Liddle completed the top ten in the event.

A unique event was also held for the Swagger Factory Apparel Crate 602 Sportsman with the running of the first annual “Black Flag Challenge”. The event was held for the 16 cars that had perfect attendance this season along with the winner of last week’s Montgomery County Office for Aging Inc. Limited Sportsman feature for a total of 17 cars getting the green flag for the first four lap segment.

Jeremy Tyrrell was the winner of the first round and chose an eight-car invert for positions for round two which was won by Chad Edwards. Round three was won by Troy Palmer and after a two-car invert Jason Reome who started on the outside of the front row was the winner of round four followed by Edwards, Talbot, and Palmer. A complete finish for all 17 cars can be found at the bottom of this release.

“I kind of figured that I was gonna win it to be honest with you,” a confident Reome said after the event on victory lane. “Being the first time we’ve ever done it, I like it, and will do it again.”

“I can take very little credit for this event,” Swagger Factory Apparel’s Michael Jackson said after the event was completed. “Scott Friers approached me prior to covid and said the Modifieds have the Bill Ag event, the Pro Stocks have the Hondo Classic event, the Sportsman guys need something, and I said I’m in. I would attach my name to anything Scott Friers does, he does so much for local sports and local auto racing. So, we started brainstorming the idea, this was something different and I think that it worked.”

“Hopefully, the drivers and the fans like the event,” Friers said afterwards. “We’ll try to get some feedback on the event and maybe make some changes but hopefully we’ll see it back. I Know Mike doesn’t like to say anything, but he does just as much or more for anyone in local racing, especially at Fonda, and everyone in the pits should be thanking him for what he does.”

Next Saturday, July 16 at the Fonda Speedway, One Zee Tees and AIM Autism presents Autism Awareness Night featuring the “Thunder on the Thruway Series” for the Sunoco Modifieds, the Swagger Factory Apparel Crate 602 Sportsman, and the Algonkin Motel Pro Stock divisions. The Montgomery County Office for Aging Inc. Limited Sportsman, and the Fonda Fair Four Cylinders. Gates will open at 4:00 p.m. with hot laps at 6:00 p.m. and racing at 7:00 p.m.

1st win of 2022, 1st Hondo Classic win, and the 2nd win of his career in the division at Fonda for Ballard