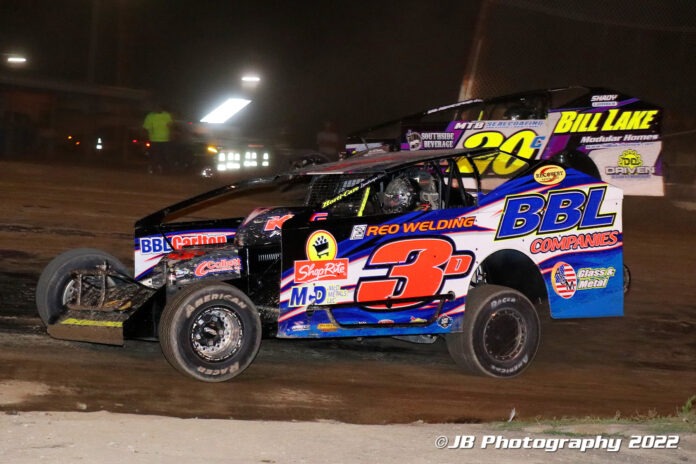 Fonda, NY – It all comes down to this! On Saturday, August 13 a special racing program sponsored by Benjamin Moore Paints will take place at the “Track of Champions” Fonda Speedway called “Championship Night”.

The 2022 Track Champions will be crowned in all regular divisions this Saturday including the Sunoco Modifieds, the Swagger Factory Apparel Crate 602 Sportsman, the Algonkin Motel Pro Stocks, the Montgomery County Office for Aging Inc. Limited Sportsman, and the Fonda Fair Four Cylinders, both single and dual cam.

The history of the Fonda Speedway makes it a special place to win a Track Championship and it is a prestigious award honoring car owners, sponsors, drivers, and crew members who have worked hard all season long to achieve this goal.

The Mohawk Valley Vintage Dirt Modified Series (MVVDMS) will also be in action at Fonda this Saturday, and they will also crown Track Champions in all divisions of their organization. Gates will open at 4:00 p.m. with hot laps at 6:00 p.m. and racing at 7:00 p.m.

The Benjamin Moore Paints/Jumpin’ Jack’s Drive-In sponsored #1M of 2011 Fonda Speedway Crate 602 Sportsman Track Champion Mark Mortensen will be on display at gate two from 4:00 p.m. to approximately 5:00 p.m. so people can see the race car up close and meet the driver from Scotia, NY who will be handing out autographed pictures as well!

In addition, Mark’s brother Brett Mortensen who won the first feature of his career in the Swagger Factory Apparel Crate 602 Sportsman division last Saturday evening will have his Jumpin’ Jack’s Drive-In/Mohawk Honda sponsored #1B car on display at the Fonda Speedway Museum from approximately 3:00 p.m. to 5:00 p.m. Brett was crowned the 2020 Fonda Speedway Track Champion in the Montgomery County Office for Aging Inc. Limited Sportsman division where he also has a total of five feature wins.

Going into Benjamin Moore Paints Championship Night this Saturday August 13 the point battles in the Sunoco Modified, Swagger Factory Apparel Crate 602 Sportsman, and the Montgonery County Office for Aging Inc. Limited Sportsman divisions are too close to call and won’t be decided until the checkered flag falls in each of their feature events.

In the Sunoco Modified division, Matt DeLorenzo is the current point leader with 812 followed by 2021 Co-Champion Ronnie Johnson with 804 (-8), and the other Co-Champion from 2021 Rocky Warner with 798 (-14). DeLorenzo has a total of five wins, eight top five, and 14 top ten place finishes with his worst finish of the season being 30th.

Payton Talbot took over the point lead last Saturday evening in the Swagger Factory Apparel Crate 602 Sportsman division at Fonda with a second-place finish putting him seven points ahead of Chad Edwards who had mechanical issues last Saturday and finished in the 20th position.

Talbot’s consistency has put him in a position to challenge for the 2022 title with a total of three feature wins, 15 top five and 17 top ten place finishes with his worst finish of the entire season being sixth which happened twice during this year.

Edwards started out the 2022 racing season with two consecutive victories in the Swagger Factory Apparel Crate 602 Sportsman division and has led the point race for most of the season until last Saturday’s misfortune placed him 20th in the final race finish. All total Edwards has six wins so far in 2022 to go along with 14 top five and 15 top ten place finishes with his worst finish of the season being 21st.

Zach Dufel is the current point leader in the Montgomery County Office for Aging Inc. Limited Sportsman division with 790 points, 24 points ahead of Kyle Dingman who is second in the point standings going into Championship Night with 766.

The five MVVDMS division champions that will be decided this Saturday include the Antique, Mystique, Late Model, Sportsman, and Modified Divisions. Jimmy Fugel is the current point leader in the Antique division going into Saturday evenings racing program while defending 2021 Co-Champion Carl Cram looks to be in good shape to take the 2022 Mystique Championship.

Randy Delaney has a six-point advantage over Jack Miller going into Saturday’s racing program in the Modified division while Will Reed, Curtis Condon, and John Roese all have a shot at the 2022 Late Model division championship. The trio has battled all season long with the champion to be decided by one single event this Saturday night.

Rookie driver Dan Colvin currently leads the Sportsman Division points as he looks to lock up the title this Saturday as well. Mohawk Valley Vintage Dirt Modified Series (MVVDMS) promoter Laurie Fallis would like to thank all of her great series sponsors, all of the drivers that support the series, and would also like to thank Fonda Speedway promoter Brett Deyo and his staff.

2022 Track Champions will be decided!