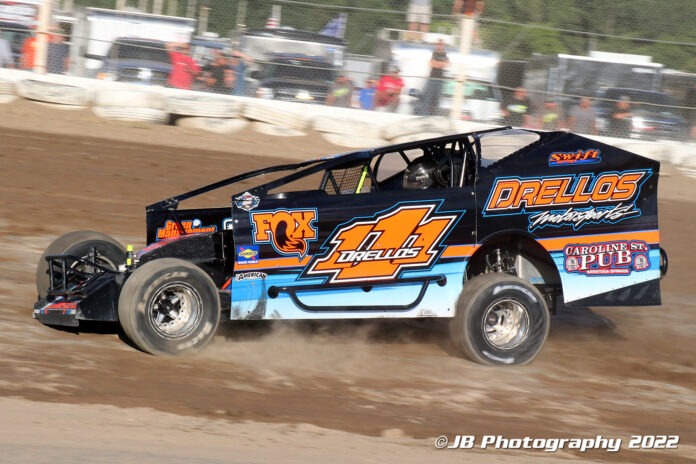 FONDA,NY- It was labeled as a “Championship Title Fight” on Facebook between Matt DeLorenzo; Ronnie Johnson; and Rocky Warner in the Sunoco Modified division, Payton Talbot and Chad Edwards in the Swagger Factory Apparel Crate 602 Sportsman division, Zach Dufel and Kyle Dingman in the Montgomery County Office for Aging Inc. Limited Sportsman division.

More on the 2022 Track Champions coming in a separate release later today.

Back on June 16, 2018, Demetrious Drellos won the first Modified feature of his career at Fonda in the Bill & Erik Nelson owned #85. After being very competitive the entire 2022 season at Fonda until bad luck struck him numerous times, Drellos won his second career feature event at the “Track of Champions” on Saturday evening in the family owned Drellos Motorsports #111.

“It took all season and on the final night we finally got it done,” Drellos told Mimi Lazzaro in victory lane. “I can’t thank my mom & dad enough along with my wife, Tom, Joe, and Joanne they have been here all season. It’s been an up and down year and we just had a blast. Congratulations to Matty D for clinching the championship.”

Pastor Greg Nitz said the prayer during opening ceremonies while Mimi Lazzaro sang the National Anthem before the “Championship Title Fight” began. The 50/50 of $3,899 has not yet been claimed so double check your tickets to see if you were the winner! If the prize is not claimed, it will be rolled into the Fonda 200 weekend drawing.

The 30-lap Sunoco Modified feature began with outside front row starter Brian Gleason taking the early lead with Craig Hanson in the second position by lap three after starting seventh. Matt DeLorenzo started the event in the eighth position and was up to the fourth position at that point while tenth place starter Ronnie Johnson also moved into the top five as the championship battle began.

Gleason held the lead through two caution flags on laps five and seven while 11th place starter Demetrious Drellos was sitting in the fourth position on a lap seven restart. Three laps later on lap ten, Drellos was the new second place car while DeLorenzo and Johnson were swapping the fourth position a couple of times before DeLorenzo took control of the spot on lap 13. Gleason continued to lead at the halfway point followed by Drellos, Hanson, DeLorenzo, and Johnson.

Drellos closed in on Gleason on lap 16 and one lap later was the new race leader with a pass on the inside just as the lap was completed. With no caution flags for the remainder of the event, Drellos pulled away with the attention now turning to the drivers who were in contention for the 2022 track title DeLorenzo, Johnson, and Rocky Warner who was up to the sixth position on lap 21.

Johnson and Warner swapped the sixth position a couple of times before Warner took over the spot late in the event. As DeLorenzo held on to a third-place finish to the checkered flag, 13th place starter Danny Varin moved steadily into the top five, getting by Gleason for the second position with only three laps remaining. Drellos was the race winner followed by Varin, DeLorenzo, Gleason, and Hanson with DeLorenzo winning the championship.

“That was a lot of fun,” Drellos said. “We worked on a real good shock package the last few weeks and we’ve perfected it I guess a little bit and were able to get through the holes a lot better than Brian (Gleason) was. We finally got enough momentum up that when he bobbled, we capitalized on it.”

The Swagger Factory Apparel Crate 602 Sportsman feature was a caution filled event with the championship not decided until the checkered flag flew. Stephen Gray led at the drop of the green flag and led the first four laps until lap five when Greg Havlichek took over the lead. Gray’s night came to an unfortunate end on lap six when he got into turn one a little too hard, spun his car, and backed it into the wall bringing out the caution. Gray was done at that point in the event.

Eighth place starter Troy Zilles took over the lead on the restart with Cody Clark bringing out another caution on the next lap with a broken right rear suspension while running third. Chad Edwards started the event in the 11th position and moved into the second spot on lap eight after getting by Havlichek for the position with 12th place starter Payton Talbot also getting by Havlichek for the third spot at that point.

At the halfway point in the event the top five consisted of Zilles, Edwards, Talbot, Jason Reome, and Havlichek. Zilles held the lead through four more cautions, choosing the outside on each double file restart to hold on to the top spot and went on to his first career win in the division in the Alpin Haus sponsored #14Z. Talbot got by Edwards for the second position on lap 20 and sealed up the championship with Troy Palmer, and Brendan Gibbons completing the top five behind Edwards.

“Had a good night,” Zilles said in victory lane. “We hit on the setup, and it was a great night. Every yellow when they said on the Raceiver that the 14T (Talbot) was behind me I was saying to myself this isn’t good, but I was just happy that I could hold him off.”

Gary Silkey led the first lap of the Algonkin Motel Pro Stock feature before fifth place starter Luke Horning moved into the lead on lap two on the inside of turn three. Eighth place starter Nick Stone was the new second place car on lap three while seventh place starter Beau Ballard was right behind in third.

On the outside of turns three and four, Stone took the lead away from Horning with Ballard also getting by Horning for the second position. At the halfway point Stone led the way with Horning, Gates, ninth place starter Chuck Dumblewski, and Ballard completing the top five. Dumblewski got by Gates for the third position just past the halfway point while lap traffic came into play for Stone with four laps to go.

Stone went on to his 10th win of the season and the 2022 Track Championship in the Todd Hoffman owned #8N followed in the top five by Horning, Dumblewski, last weeks winner and 11th place starter Ivan Joslin, and Ballard.

“When the track gets a little slicker you can see a difference,” Stone said in victory lane. “The last couple of weeks we had some bit in the track and every car is fast, great racing it just makes it tough. We struggled a little there and the rough tracks aren’t real coil friendly either, so we struggled a little on that, but now we are right back to where we were at, and the car felt like it did early in the season.”

Josh Kane led the last seven laps of the 15-lap Montgomery County Office for Aging Inc. Limited Sportsman feature for his second win of the season followed in the top five by Corky Warner, Jonathan Feagles, Connor Prokop, and Ryan Sweet. Zach Dufel was involved in an accident on lap two but was able to finish just behind Kyle Dingman to seal up the championship for Dufel.

“We were pretty strong all season,” Kane said after the victory. “For the ups and downs, wrecking one car and having to learn a whole new car definitely paid off tonight though. I was just praying they stay clean, the last thing I want to do is have another wreck after destroying one car, it definitely doesn’t feel good to crash.”

Ken and Kerrie Hollenback continued their domination of the Fonda Fair Four Cylinder division, Ken winning his 16th feature of the season in the SOHC and Kerrie the 13th of the 2022 season in the DOHC. Both were also crowned the 2022 champions in their respective classes.

The Fonda Speedway will be taking a break now for the annual Fonda Fair before the season ending Fonda 200 weekend takes place on September 15-17. Stay tuned to the Fonda Speedway Facebook page and the website for details on the $53,000 to win event!