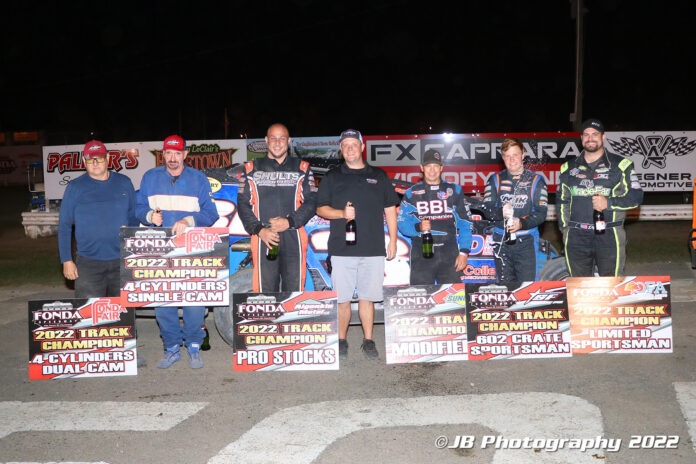 FONDA NY – Saturday evening August 13 was labeled as Benjamin Moore Paints Championship Night, and it didn’t disappoint as point races were very close in three of the regular five divisions, with the champions not decided in those three divisions until the final checkered flag was thrown in each of the feature events. Here are each of the Track Champions thoughts, in their own words, after the championships were decided. 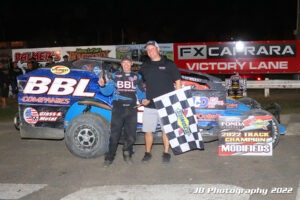 “It wasn’t our plan to be here at Fonda every week, but we started running real well at the beginning of the year so we kind of worked things out that I could race here every Saturday,” DeLorenzo told Mimi Lazzaro during the championship celebration. “The track kind of threw me a curve ball the last month being choppy and stuff, and the car just really wasn’t comfortable. We also had motor problems, but it all worked out. This is the first time we’ve run a big block here all year, I always had a small block here, but everybody went to a small block back then.”

“Back then Bobby Varin I know ran a big block and we always battled back in the day, so it’s been a while hasn’t it. Now everybody has the open small block with Brett’s rules, but it shows that the big block can be competitive. I’ve been sleeping at the shop a lot, I have to thank my wife for letting me do that and my kids they are pretty busy in their lives too so I’m glad they are all here tonight, my mother is here too so it’s pretty cool.”

“The kids were putting the pressure on me saying dad you better win tonight, so I said to them it is just like you being up at home plate with a full count on you and the bases are loaded and the score is tied. A lot of pressure tonight for sure and I just wanted to do good for everybody and finish. My brother Mike is the brains behind the operation and Brian (teammate Brian Gleason) both of them really work hard every week to try and figure out these coil cars.”

“My dad Tom runs around to get parts for us, and we have a great bunch of people along with a lot of extra people tonight to help out which is cool so hats off to my brother Mike he does a phenomenal job. I have to thank BBL Companies who have been with me since I started racing, REO Welding, Collette Mechanical, Recovery Sports Grill, Carey Electric, MCD Metals, Kevin Enders, Dan Bedell whose motor was in the car tonight, Bicknell Racing Products, and Dennis from Integra Shocks. We have been running the same car at both Albany Saratoga and Fonda all season long and tonight this is actually my teammate Brian’s car.”

First career Track Championship in the division at Fonda for Talbot. 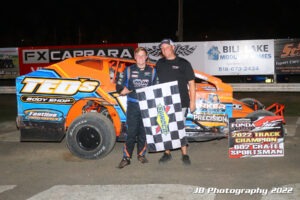 “Yeah, this is awesome,” Talbot said during the championship celebration. “I didn’t really expect it coming into tonight, I knew that Chad (Edwards) was going to be tough. I didn’t know if the top or bottom was gonna be better, but we got lucky there when Chad pulled the slide job on us, we had enough momentum to get back by him on the bottom. I ran the top for a while, Troy (Palmer) and Chad were checking out, so I was just following them. You know the car didn’t feel bad and I think the tires got a little more heat in them on exit.”

“At the end there I was just trying to run the bottom and keep the 10% behind me. We’ve had a wicked year here, I can’t ask for anymore, I’ve got an awesome crew behind me and trying keep up on maintenance on this thing week in and week out, it paid off. You’ve gotta check everything you can’t have mistakes. We’ve just had a fantastic year; I don’t think that we’ve broken down yet knock on wood.” 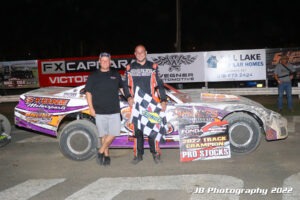 “Preparation is everything,” Stone said. “I guarantee we have the most prepped out race car. The body looks a little rough, but you take this body off and the car looks brand new underneath it. We got the tires that we needed and didn’t have to be conservative, everything was always prepped out perfect.”

“On Tuesday we all go up to the garage to work on the car and luckily, we never wrecked, all of our stuff was very minor. We noticed things before something happened and that’s how you do it. Every time I go out there, I’m focused, and it’s been both ways for me during my racing career, I’ve had very little help at times, to doing it all yourself, so you come to the track and have some good nights, and you have some rough nights because you’re always working on the car.”

“Some of the guys that I see struggling I know exactly what they are going through because I know how it is, I’ve been there. I finally caught a nice ride with Todd, and I know he enjoys it, so it is kind of a perfect combination. I have to thank Todd, Melissa, Gus, Matt, Scott, Jamie, and my dad. Todd had these sponsors over the years, and some have followed me over, so our teams merged together real well.”

First career Track Championship in the division at Fonda for Dufel. 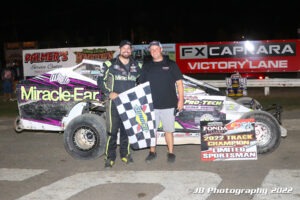 “I honestly have no words, I’ve dreamt of being here just as a crew member and being here as a driver is so special to me,” Dufel said. “Obviously with Mike (car owner Michael Jackson) and his long road to recovery I can’t thank him enough, Harry Shaffer, the whole Shaffer family, Harry has been there for me since day one. He’s been there all season telling me what to do, I’m taking his and Mikey’s tips and it worked out. It’s insane, I literally have no words, it’s awesome.”

“If my dad was here (the late Jay Dufel who was a long time crew member for Jack Johnson) he would have been telling me to move up mid-season but Chad (Edwards) is a friend of mine and he will be a good mentor when I move up next year so hopefully we’ll run well, we’ll see what we have for them at the end of the season and how we match up with them so I’m excited.”

“Winning anything at the Fonda Speedway is cool,” Dufel’s car owner and team manager Michael Jackson said. “This team has worked really hard, not everybody is here tonight, but we’ve tried to build a program that can win, Zach is a new piece of that, well he’s been a piece for a long time, but to be able to accomplish what he has done this season has been great.”

Mimi concluded the interview with Jackson saying, “I am so happy that you are still here with us, you defied medical experts, you defied life, and you are here, it is so awesome to have you here and thank you for everything that you do for racing,” Lazzaro said about Jackson.

“Thank you for that Mimi, I wasn’t ready for that,” Jackson said with emotion. 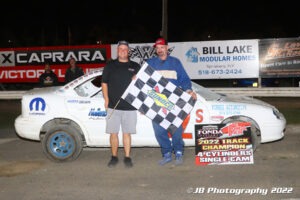 “This is a new car for us this year,” Ken Hollenback said. “Everybody else has my old junk cars now.”

Kerrie Hollenback had a previous Track Championship in the division at Fonda back in 2013 (DOHC).

“I thought they were gonna give us championship belts,” Kerrie Hollenback said. “I was gonna do a back flip off the top of the car. But anyways I am a champion and God bless my brother Kenny who is the overall champion.”

CLOSING THOUGHTS ON THE REGULAR SEASON

“It was a fun season, always fun at Fonda,” head announcer Chris Moore said. “The people here are what make it great, our racers gave us great support, we have had a great season. But we’re not done yet, we’ve got the Fonda 200 coming up in a month, so we’ve still got a lot to do.”

“It’s been a really, really good time,” Fonda Speedway General Manager Jamie Page said. “We have an awesome group here, it’s like a family, it’s pretty awesome to have the people that we do here at Fonda.”

“Pretty amazing season really,” Fonda Speedway promoter Brett Deyo said. “We survived through a lot of factors, tire shortages, inflation, and no rain outs. Who would have thought that when we moved the first race to a Sunday to get it in that we would get every other race in. We were struggling with a wet spring, but everybody stuck with us. It was an awesome season, great car counts, fan counts, tonight was off the charts.”

“The 50/50’s were great, I think we survived a wild season and now we can regroup and get ready for the Fonda 200,” Deyo continued to say. “I am excited going into the 200, I think we have a lot of momentum and no conflicts this year on the schedule, so it should be pretty wild.”

The Fonda Speedway will be taking a break now for the annual Fonda Fair before the season ending Fonda 200 weekend takes place on September 15-17. Stay tuned to the Fonda Speedway Facebook page and the website for details on the $53,000 to win event!