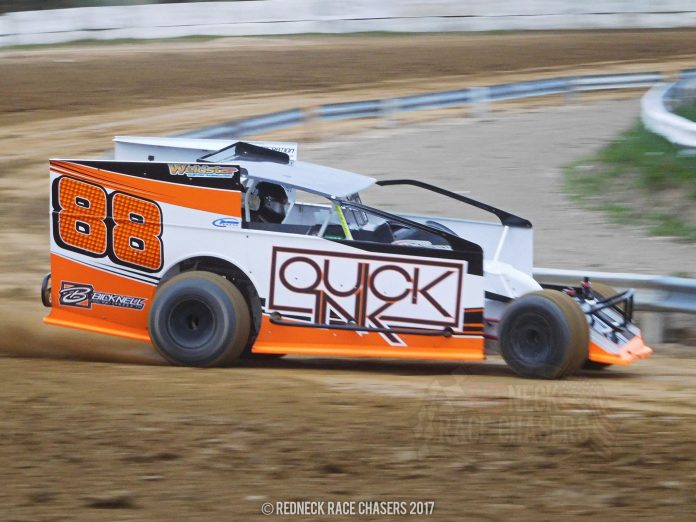 It turned out that the playing of “Oh Canada” at the start of the festivities at Freedom Motorsports Park was an omen of things to come, as Shayne Pierce and Cody McPherston, both from St Catharines, Ontario, won the headliners on Friday, June 2nd, before another good crowd. Pierce captured his first ever Big Block Modified win, with McPherson taking the Bellinger Electric Inc Sportsman Lightning Series event, earning him $1,000.
Pierce, who is making Freedom his home track, took the lead from the outside pole at the drop of the green and was never headed in the 30 lap race, which was marred early when one of the other favorites, Erick Rudolph, driving a Randy Chrysler-owned Big Block, lost a wheel after contact with the outside wall in turn two, reportedly after contact with another car, ending his night early.
From there, Pierce, held off a brief but spirited challenge from Adam Hilton early before driving away to a convincing and historic win. He did it by literally “dancing with the devil” all night on the outside, often inches from the wall. Hilton held on for second, with Phil Vigneri III, Ron Cartwright Jr., and Ray Bliss completing the top five. On his race strategy, an ecstatic Pierce explained, “That’s where I feel most comfortable wherever I go. The track’s nice and wide. I had a lot of room up there, so I could really drive into one and let her float. In three and four I was on the gas all the way around. It was a tough break for Erick Rudolph. I’m sure he would have been right there. We would have had a nice battle.”
The Lightning Sportsman Series race saw Adam Leslie, who set a track record in time trials, draw the pole, flanked by McPherson. Leslie took the early lead, which saw previous Sportsman winner James Friesen an early casualty after contact with the wall twice. McPherson stalked Leslie from the start, before slipping into the lead on lap 10, while a Canadian wave developed behind them.
As the race progressed, defending champion Brad Rouse worked his way into second on lap 12, and then chased McPherson the rest of the way in the 40 lapper. He was never far away and was faster in the turns, but McPherson was stronger on the straightaways, preventing Rouse from making a bid for the lead.
At the line, it was McPherson by about five car lengths over Rouse, with fellow Canadians Chad Chevalier, Darrel Farraway, in first visit to the track, and Justin Sharp, who came from 15th to complete the top five and win the “Hard Charger” Award.
McPherson offered, “The car was real good. The track was similar to the first time we came here last year. It slickened off in the middle and the bottom was where you needed to be. I used the setup I used that night, and sure enough, it worked again. Kudos to the track prep crew. Between the last time I was here and tonight, it’s hundred times better. They did a heck of a job.” For his part, Rouse conceded, “Even if there were more laps, I wasn’t going to catch Cody. He had the better car tonight.” Chevalier, who started fourth, and a previous winner at Freedom last season, observed, “I stayed on the bottom because that’s where my car was best.”
The Street Stock race saw Dennis Cummings, from Wellsville, win his first ever career feature, wiring the field from the pole. Defending track champion Al Brewer finished a distant second. An elated Cummings allowed, “It’s been tough. We keep trying and trying. I think Al (Brewer) gave it to me tonight, but maybe not. (Probably not, as he pulled away from the always tenacious Brewer on three restarts.) Nice track. Nice and smooth. It was a good race.”
Finally, Bruno Mowery, subbing for his son Matt, crossed the line first in the Mini Stock Feature after a race long battle with defending champion, Brad Shepard, only to lose the win when he came up light at the scales, giving the win to Shepard.
NOTES: Big Blocks have won the first two Modified events at Freedom, with its new outlaw format, which allows Modifieds of all stripes to compete and also permits sail panels, with Brad Rapp winning the other. Rapp fell victim to mechanical woes and wasn’t able to start the Feature………..Seven Canadians competed in the Sportsman Feature this night, along with Pierce in the Modifieds, giving them all a nice payday, with the very favorable exchange rate currently in place………..Adam Leslie’s track record time trial of 15. 178 dwarfed the 15.9 recorded by Max Blair in a Super Late Model last year, further evidence that the new clay, installed last fall by track owner Bob Reis, is paying dividends.
Results:
Modifieds: (30 laps) – 1. Shayne Pierce, 2. Adam Hilton, 3. Phil Vigneri III, 4. Ron Cartwright Jr. 5. Ray Bliss, 6. Rick Richner, 7. Rich Regalski, 8. Rick Hoctor, 9. Tony Pangrazio, 10. Randy Chrysler, and 11. Erick Rudolph. DNS: Brad Rapp. Heat winners were Cartwright and Hilton.
Sportsman: (40 laps) – 1. Cody McPherson, 2. Brad Rouse, 3. Chad Chevalier, 4. Darrel Farraway, 5. Justin Sharp, 6. Adam Ashcroft, 7. Kyle Inman, 8. Adam Leslie, 9. Mark Chiddy, 10. Ray Bliss, 11. Brian Bellinger, 12. Zach Sam, 13. Tom Richau, 14. Eric Ensell, 15. Alan Bratek, 16. Cody Egner, 17. James Friesen, 18. Carl Inman, 19. Tim Schram, and 20. Michael Oakes. Heat winners were Bliss, Leslie, and Rouse. Dash winner was Sharp.
Street Socks: (12 laps) – 1. Dennis Cummings, 2. Al Brewer, 3. Joe Chamberlain, 4. Ted Mascho, 5. Jake Mascho, 6. Bill Tice, 7. Rob Stromecki, 8. Bruno Mowery, 9. Steve Sklar, 10. Bill Taylor, 11. Bill Demick, 12. Dustin Goss, 13. Kane Stebbins, and 14. Terry Gaylor. Heat winners were Cummings and Ted Mascho.
Mini Stocks: (12 laps) – 1. Brad Shepard, 2. Duane Powers, 3. Holden Heineman, 4. Ryan Allen, 5. Chris Horton, 6. Austin Woodring, 7. Tony Kulesza, 8. Mike Torrence, and 9. Tyler Oakes. DQ: Bruno Mowery. Heat winners were Powers and Shepard.