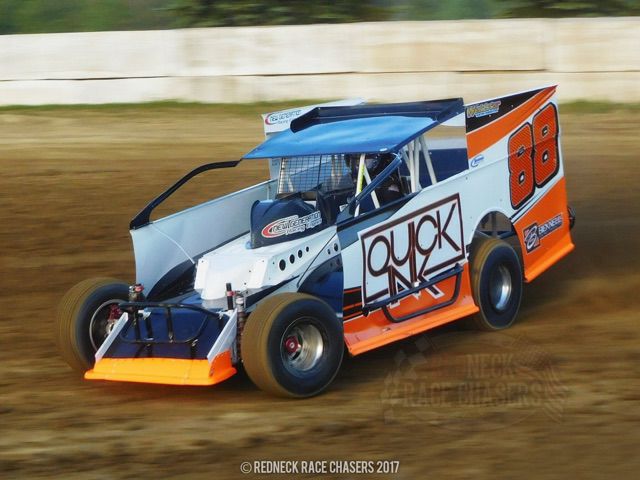 DELEVAN, NY – Shayne Pierce used the high side of Freedom Motorsport Park to his advantage to hold off Billy Van Pelt and capture his second win of the year in the Prime Time Energy Service Outlaw Modifieds on Friday, June 9. Other winners on Sixt Lumber Night were Mickey Ciliberto in the NY6A Micro Sprints, Brad Rouse in the Tidds Towing DIRTcar Sportsman, Dennis Cummings in the Pioneer Ford Street Stocks and Matt Mowery in the Danny Heineman & Sons Mini Stocks.

Adam Hilton and Shayne Pierce led the field to green in the Prime Time Energy Service Outlaw Modifieds with Pierce in front at the stripe on lap 1. A three car battle ensued for the runner-up spot between Hilton, Brad Rapp and Ron Cartwright Jr. as Billy Van Pelt rounded out the top five. Opening night winner Rapp suffered mechanical problems for the second week in a row and brought out the caution on lap 3.

On the restart, Pierce again assumed command but it was Phil Vigneri III who grabbed third with a bold outside move around Cartwright and Van Pelt. On lap 6, Van Pelt got a big run off turn two and out dragged Vigneri III into turn 3 to re-take third. Now Van Pelt was on the charge after Hilton and he was able to commandeer the second spot from Hilton on lap 10 just before Cartwright Jr slowed to bring out caution number two.

Pierce was finally able to clear Van Pelt on lap 20 and looked to be on his way before the complexion of the race changed. On lap 27, Venuto’s fine top five run ended when he went up in smoke in turn four to bring out the final yellow flag and set up a short run to the finish.

It was now a three lap shootout for the victory. The single file restart did not deter Van Pelt as he got a great run on the low side and put the pressure on Pierce to be the first under the checkered flag. Van Pelt was able to get a nose in front on the bottom of turn two on the last lap but Pierce of St Catherines, ON, used his patented outside charge in turns three and four to hang on for the exciting win. Van Pelt had to settle for a stout second as Hilton, Vigneri III and Kevin Hoffman completed the top five.

The visiting NY6A Micro Sprints found Nick Groff in the lead at the start followed by Mickey Ciliberto, Shelby Ogozaly, Chuck Hunt and Jonny Kolosek. Ciliberto was able to duck inside of Groff in turn four on lap 4 to take the lead and the Gasport resident was never headed the rest of the way in the caution free 20 lap feature. Ogozaly was able to take second at the line with a fast closing Tyler Walker in third. Jonny Kolosek and Chuck Hunt rounded out the top five.

The front row of Adam Leslie and Brad Rouse would lead the Tidds Towing DIRTcar Sportsman 25 lap feature to green with Adam Ashcroft, Brian Bellinger and Kyle Inman in tow. A side by side tussle between Rouse and Leslie would fall to Rouse on lap two and the duo began to distance themselves from the field. Leslie was able to keep Rouse in his sights but it was the defending Sportsman champion Rouse, of St Catherines, ON, who was the class of the field on this night as took down his first win of the year in the caution free event over Leslie, Ashcroft, Inman and Ray Bliss.

Rob Stromecki led the Pioneer Ford Street Stock field to green with Ted Mascho, Jake Masco, Bill Demick and Randy Taylor the top five. An incredible five car battle between these drivers ensued as positions swapped with each lap. Pandemonium struck just prior to halfway on lap nine as Taylor took the lead from Stromecki. As he entered turn one, Taylor got a little out of shape and the first four cars of Taylor, Stromecki, Ted Mascho and Demick were involved which brought out the caution. Demick was done for the night while Taylor, Stromecki and Mascho restarted at the rear of the field.

The turn of events put Dennis Cummings in the lead and the Wellsvile resident was able to hold off Mike Jackson and a fast closing Taylor for his second win a row in the 20 lap feature. Taylor, Jackson, Steve Sklar and Stromecki completed the top five.

Holden Heineman led the Danny Heineman & Sons Mini Stocks to green but was overtaken by Ryan Allen on lap two. Matt Mowery charged hard and went around Allen and Heineman to take the point on lap four. Defending track champion and two time winner Brad Shepard sailed into the second spot on lap seven and an intense duel for the lead took place between Mowery and Shepard. With three laps to go in the 15 lap feature, Shepard was underneath Mowery but went around in turn three to bring out the caution. Mowery led on the restart and Shepard was flying through the pack but ran out of time as Mowery of Olean took his first win of the year over Shepard, Heineman, Allen and Chris Benz.