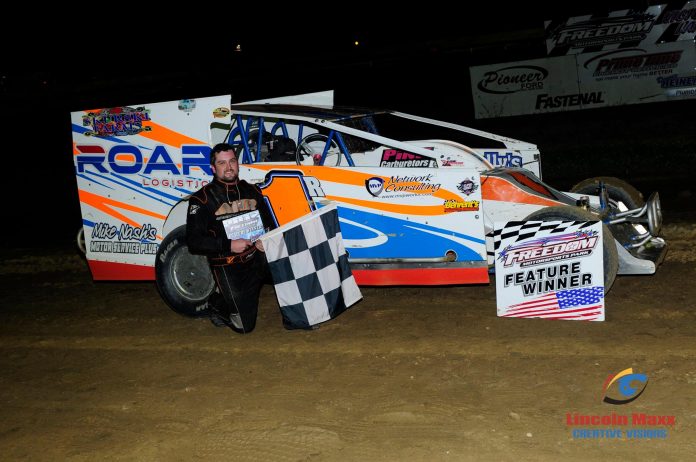 John Venuto took the early lead in the 30 lap Modified Feature, but was quickly supplanted at the front by Brad Rapp, after a four car tangle on lap three. A lap five caution for a slowing Phil Vigneri, had Hilton steer around Rapp on the restart, while Brachmann took second on lap 10 to set up a duel that would dominate the rest of the way. Brachmann, who adapted quickly to his new surroundings, immediately began hounding Hilton, the current point leader at Freedom, mostly on the outside, before forging into the lead on lap 14.

Brachmann looked like he had things well in hand, but Hilton kept digging on the bottom with his Small Block, while Brachmann was content to wheel his Big Block around the top. On lap 21, in lap traffic, Hilton crept in on Brachmann before slipping back into the lead on lap 23. From there, he was able to gradually pull away over the final seven laps. At the line, Brachmann was a half straightaway behind, followed by Rapp, Curt Van Pelt, subbing for brother Billy, and two time winner Shayne Pierce to round out the top five.

Hilton offered, “We’re just a Small Block here. We can’t really run the top as well as the Big Blocks can, keeping the momentum up. We’ve been good on the bottom, just working it and working it. Finally it paid off tonight. Chad ran me clean, and he’s one of the best of the best, so it’s a good win for us.” Asked what he thought when Brachmann took the lead, he said, ‘It’s over, ‘ but then I saw the lap car and we started catching him and I just kept at it.”


The 25 lap Sportsman Feature saw Fugle, a Canandaigua regular, start on the pole, but Kyle Inman grabbed the lead. Fugle drove past Inman on lap four and then was joined at the front by defending track champion, Rouse, who worked his way into second on lap nine after starting sixth. From there, Rouse applied heavy pressure from all angles, but mostly outside, for the rest of the race, with Fugle holding him off on three restarts to score the apparent victory on his first visit to the facility.

Unfortunately, he ran afoul in tech and was DQ’d, giving Rouse his fourth win of the season, but not before he had put on quite a show for the fans. Adam Ashcroft, Inman, Cody Egner, and Eric Ensell, completed the top five in the entertaining race.

The Street Stocks put on a heck of a show of their own, as Dennis Cummings, from Wellsville, repelled a withering attack from Al Brewer to eke out a close victory, his third of the season. Brewer actually took a brief lead on a lap 10 restart, but it was negated by a caution and Brewer had to settle for second after testing Cummings the rest of the way, including getting under him with two laps to go.

Cummings, the current point leader, allowed, “It was awesome running next to someone I know I can trust. I thought we were done when he got under me- a second place car. The car kind of slid up and I took advantage of it.”

Finally, Holden Heineman, from Sardinia, wired the field to win the 15 lap Mini Stock Feature by a wide margin over Ryan Allen, weathering two restarts in the process. He noted, “We had a good group of fast cars. I kept pushing and I over-drove it on one restart, but I kept telling myself, ‘Stay calm.’ As soon as I got my line, I kept hitting it.”

NOTES: The car count and the crowds continue to improve, as the Outlaw Modified concept is taking hold. The mixture of Big Blocks and Small Blocks has produced close races, while the Sportsman class provides a strong companion. The Street Stock and Mini Stock fields have swelled recently, as well, as the racy track draws new and returning competitors.
Results: