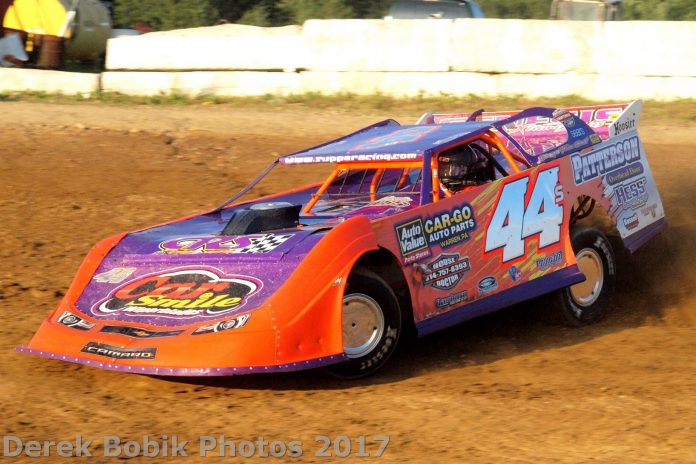 FREEDOM, NY – Dave Hess, from Waterford, PA, scored a hard-earned win in the United Late Model Series Super Late Model 30 lap Feature before a banner crowd at Freedom Motorsports Park on Friday, August 18th. The veteran Hess had a little help along the way, as prohibitive favorite Max Blair, who became the first driver to break the 14 second mark at Freedom during time trials, had to fight his way to the front after a mid-race jingle. Even with that development, he was under constant pressure throughout the event.

Brent Rhebergen took the lead from the pole and set a blistering pace, with Hess in his tire tracks, until a lap four caution for a slowing car took the air out of the run. It was the first of three cautions on lap four, the second being a three car scrum and the third eliminating veteran Bump Hedman, who literally knocked the wall down in turn two.

On each attempted restart, Hess took the lead and the fourth was no exception, as he steamed past Rhebergen to grab the spot for good, with Greg Oakes taking second and soon breathing down his neck, with Blair up to third after starting sixth. Oakes stalked Hess through lap traffic until the race took a dramatic turn on lap 15. Blair was engaging Oakes for second when the two made contact coming out of turn two, with Blair spinning, while Oakes was able to continue. The contact was deemed incidental by ULMS officials, resulting in Oakes retaining his runner-up spot while Blair had to restart tail for causing the caution.

Hess retained the lead the rest of the way, wearing Oakes like a coat much of the time, while Blair made a dash through the field and made a late pass of Rhebergen to finish third. Brady Wonderling completed the top five in the entertaining race.


Hess, who finished second in two previous appearances, losing the previous Freedom race in lap traffic late in the race, offered, “I couldn’t tell if they were close or not. I slowed down a little bit in lap traffic, but it worked out for us. Just wanted to keep the thing up front and hope it stayed together sooner or later. We needed one. It’s been tough the last month, so we definitely needed it.”

In other action, Bill Deming, from Wellsville, wired the field from the pole in the 30 lap Pure Stock Feature, holding the top spot through three cautions and then fending off a late challenge from a determined Dustin Challingsworth to claim the win. Deming allowed, “I knew there were some good cars behind me, but I drove it like I was running laps. It’s only my second time here.”

Also, young second generation driver, Tyler Walker, from North Tonawanda, reeled in Matt Smith, who had built a sizable lead in the 15 lap NY6 Mini Sprint Feature, grabbing the top spot on the eighth lap and then putting lap cars between himself and Smith to score the win. Heat winner Ben Kysor finished third.

An excited Walker, proclaimed, “I love coming here to Freedom. This track is amazing. My dad made a great decision to put more rpms on the bottom. Hey, we’re here.”

Finally, Brad Shepard, from Leroy, won his fourth Mini Stock Feature, leading every lap from the pole, fending off challenges on four restarts in the process.

NOTES: Max Blair’s remarkable Super Late Model time of 13.924 was one of two sub fourteen second laps he recorded in time trials to break his own record of 14.053, set on July 14th of this season………………. The 19 car field was an encouraging sign for the future of the Super Late Models in the area, especially this late in the season, with some new names on the entry list, as well…………..The track continues to be racy, with the only enemy being the weather, which has cost the facility several racing dates. Track owner Bob Reis is pursuing the possibility of running at least one make-up event before the end of the season.