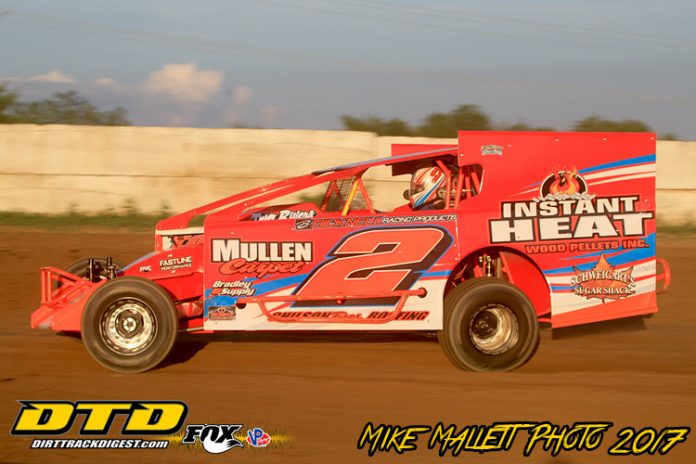 DELEVAN, NY – It was a busy Friday night at Freedom Motorsports Park as Cummings Trucking and Upstate Auto Group presented a 40-lap ‘Outlaw 200’ qualifier for the Prime Time Energy Services Outlaw Modifieds, along with a combined BEI Lightning Series/ROC Sportsman Series event for the Tidds Towing DIRTcar Sportsman, along with the Pioneer Ford Street Stocks and the Denny Heineman & Sons Plumbing Mini Stocks.

Erick Rudolph wasted no time jumping from his third starting spot to the lead at the start of the 40-lap Prime Time Energy Services Outlaw Modified feature, with Billy ‘The Kid’ Van Pelt moving past Adam Hilton and Kyle Coffey to move into second for a restart on lap 7.
Van Pelt and Rudolph battled for the lead on the restart, with Van Pelt grabbing the lead on lap 10. Rudolph fell into a battle with Hilton and Coffey with Ron Cartwright closing in from fifth in the races middle stages.

Coffey found the outside groove to first move past Hilton for third, then by Rudolph for second place. Hilton faded as Cartwright moved to fourth on lap 28. As Van Pelt worked traffic at lap 30, Rudolph and Coffey had a fantastic battle dicing through the traffic for second place until Coffey spun with Patrick Emerling on lap 37.

That set up a dash to the checkers, with Rudolph trying to pass Van Pelt over the last two laps, but Van Pelt held on for the victory over Rudolph, Hilton, Cartwright, and Donnie Lawson.


In the 40-lap BEI Lightning Series/ROC Sportsman Series feature, Adam Leslie grabbed the lead at the start from Luke Carleton, but the yellow flew on lap 2 as Mike Chiddy and Kyle Inman tangled on the backstretch.

Brad Rouse charged from his ninth starting spot to second early on, but under green, Leslie pulled away and started working lapped traffic. Further back in the field, Brian Belliger and Cody McPherson worked their way into the top five.

Positions changed often through the top five in the race’s middle stages as Leslie maintained the lead until Matt Steffenhagen’s spin on lap 23 triggered another restart.
Chad Chevalier would line up behind Leslie on the restart as the new second place car. Rouse retook second on a restart, and in the final ten laps, Leslie again pulled away at the head of the field and took the win over Rouse, Chevalier, Carleton, and Austyn Fugle.

Heats for the ROC Sportsman/BEI Lightning Series Sportsman, presented by Tidds Towing, were won by Luke Carleton, Adam Leslie, and Brad Rouse. The Demon Dash was captured by Rouse.

Jesse Quetermous grabbed the early lead in the 20-lap Pioneer Ford Street Stock feature as Ted Mascho closed in from second place. Bill Tice battled hard with Bill Tayloor and Dennis Cummings until Cummings slapped the wall in turn four to bring out the caution on lap 8.
Mascho took the lead on the restart as Taylor moved ahead of Tice for third. Taylor made the move for second on lap 12, then grabbed the lead from Mascho on a lap 16 restart. Quetermous retook second on a lap 17 restart as Taylor motored to the win, followed by Quetermous, Mascho, Jeremy Perry, and Rob Stromecki.

Heats for the Pioneer Ford Street Stocks were won by Bill Taylor and Steve Sklar.

Duane Powers battled Brad Shepard and Brandon Shepard at the start of the 12-lap Danny Heineman & Sons Plumbing Mini Stock feature, with Brad taking the lead on lap 2. Shepard built up a full straightaway lead and took a commanding win over Powers, Brandon Shepard, Tyler Oakes, and Allison Dewitt. It was Shepard’s fourth win of 2017 at Freedom.

The heat for the Danny Heineman & Sons Mini Stocks was won by Brad Shepard. 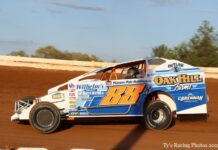 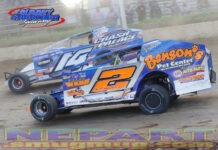 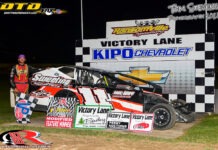