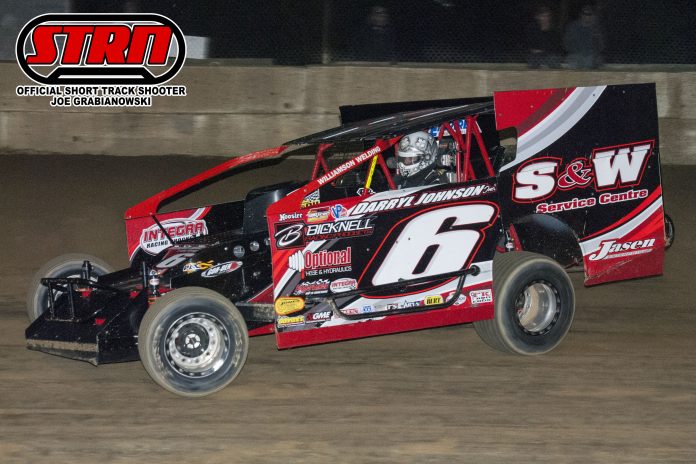 DELEVAN, NY – Mat Williamson, from St Catharines, Ontario, won his second Outlaw Modified Feature in two tries in electrifying fashion, while Max Blair, from Centerville, PA, made it two for three in ULMS Super Late Model competition before a huge crowd at Freedom Motorsports Park on Saturday, September 16th. The show was shifted to Saturday from its customary Friday when Little Valley Speedway canceled its final 2017 event. The show drew a healthy 72 cars, including 22 Late Models and 21 Modifieds for track owner Bob Reis in the finale of his first season featuring Outlaw Modifieds as the top class.

Pole sitter Shannon Whaley set the early pace in the 30 lap Modified Feature, holding it through three cautions, two on lap eight, the first for a spin and the second a red flag for a multi-car pileup in turn three on the restart. The third and final caution flew on lap 10 for a slowing Ron Cartwright Jr., who was running in the top five.

The restart showed Whaley, Billy Van Pelt, who chose to run with a left front flat caused by earlier contact with another car, Dillon Groover, Scott Wood, and Williamson, who went off eighth. While Whaley drove out to a commanding lead, Williamson, the three time Big Block Champ at Lernerville, began a grueling march to the front, careening around the outside with his Big Block, claiming fourth from fellow Canadian Wood on lap 12, and third, after a prolonged battle with Groove, on lap 19. He finally clawed his way into second past Van Pelt on lap 25, while Whaley was cruising at the front, with a seemingly comfortable advantage.

Williamson kept digging on the outside and began to close, drawing within five car lengths on lap 28. By lap 29 he was breathing down Whaley’s neck and, as the white flag flew, he made a determined move on the front chute to take the lead in turn one. From there, he went on to score the stunning win. Whaley settled for second, followed by newly crowned Mod champion Adam Hilton, who journeyed up from 14th, with Groover and Wood completing the top five in the crowd pleasing race.


Williamson offered, “We weren’t very good early. We decided to bring our Big Block down and it got slippery toward the end. I saw Adam (Hilton) poking his nose on the bottom. I had committed to the top at that point and knew I couldn’t get by the 44 (Whaley) if we went to the bottom. So I just stuck with the top. It’s a good thing it wasn’t 25 laps. We needed every bit of those thirty. I didn’t think I could catch the 44. The car was pretty good, and he ran a heck of a race. My car came on late and we just never gave up.”

Blair, who went off ninth, faced a different challenge in the 30 lap Late Model Feature- survival. Five cautions in the first nine laps slowed proceedings, as some slower cars that inherited redraw spots in their heats, had difficulties. Chris Hackett and previous race winner Dave Hess took the top two positions early and held them through the early carnage, while Blair was deftly avoiding trouble and picking his way forward.

By the lap nine restart, he was lying fourth, but he quickly dispatched Brady Wonderling to claim third and two laps later grabbed second from Hess. From there, he set out after Hackett, who was setting the pace at the front. He patiently reeled in Hackett and was challenging him for the lead by lap 19, when two cautions slowed things once again.

When the race resumed, Blair immediately went after Hackett, finally wresting the lead from his long time foe on lap 23. From there, in typical Blair fashion, he drove away in clean air over the final seven laps. Hess, with a late pass, finished second, with Hackett, Wonderling, and Greg Oakes rounding out the top five.

Blair, who is having another dominating season, allowed, “We kind of set up for the bottom. We knew we were starting in the back, and I knew that the top was a little faster early. So, we kind of aimed to hopefully be able to run the bottom because we knew we had to, to be able to pass some guys. It all worked out. The race track was awesome. You could run all over it. It’s been a while since I’ve been on a race track that physically demanding and fun to race on. That was a good time.”

The supporting classes had some drama of their own. In the 20 lap Street Stock Feature, Bill Taylor, from Arcade, wired the field for his second win of the year, but had to withstand a withering attack from Bill Demick through the entire race. Demick got under him numerous times, but couldn’t complete a pass for the lead, prompting this from Taylor, “That was a heck of a race. To start out front made things easier, but I felt pressure the whole race. Demick never bumped me once. He got under me a bunch of times, but it was the cleanest race you can believe. It was awesome.”

Finally, in the 20 lap Mini Stock Feature, runaway leader Brad Shepard suddenly broke on lap 17, handing the lead and ultimately the win to Duane Powers, from Belfast. Powers deadpanned, “It was just my night, I guess.”

NOTES: With the success of the Super Late Model shows and the vindication of Bob Reis’s decision to scrap the Crate Lates in favor of the Outlaw Modifieds, allowing all manner of Modifieds to compete, as evidenced by the huge fan turnout, along with the popularity of the Bellinger Electric Lightning Series for the Sportsman earlier in the season, the future looks bright for Freedom Motorsports Park.