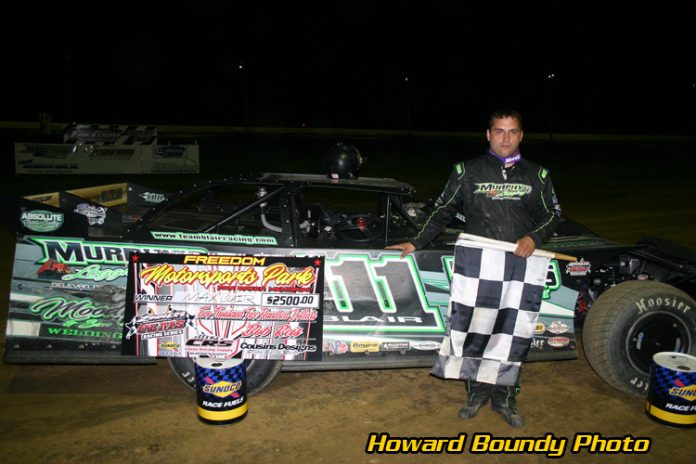 By DAVE SULLY
DELEVAN, NY – Max Blair, from Centerville PA, scored a convincing win in the 30 lap ULMS Super Late Model Ron Baker Memorial before a near record crowd at Freedom Motorsports Park on Friday, May 25th. In so doing, he tied his father, Robbie, for the most ULMS career wins. Though he ultimately won by a good margin,It wasn’t easy, as he had competition early in the hard fought affair, especially from veteran Pennsylvania runner, Alex Ferree.
Ferree, in his first ever visit to Freedom, drew the pole and, after a four car wreck at the start, which took out heat winner and potential challenger, Matt Lux, opened a sizable  lead, while Blair, who went off fifth, clawed his way forward, grabbing second in lap traffic from Doug Eck.
A caution on lap 11 bunched the field and sent Mike Maresca, Modified driver and newcomer to Late Models, to the pits for one of several visits, as the 7mm took a beating in the early going.
As Ferree looked to drive away from Blair on a subsequent caution on lap 12, he suddenly spun on his own in turn two, handing the lead to Blair. The restart showed Blair, Eck, Mikey
Wonderling, and the resilient Maresca the top four. Blair drove away, while Maresca worked his way to third. When Eck spun on lap 17, handing second to Maresca,he was one of only four cars still on the lead lap.
Maresca made a valiant attempt to keep pace on the restart, but Blair, quite familiar with the Freedom layout, gradually drew away in the latter part of the race to win by a wide margin..Maresca brought his battered car home in second, followed by Eck, who was not pleased with Maresca’s driving style, Dave Dubois, who started 16th, and Wonderling, to complete the top five.
In Victory Lane, Blair offered, “We’ve been struggling a little bit this year. We changed a bunch of stuff around again this week and we’re hoping we’ve got it headed in the right direction here. The car got rolling pretty good there. I’m not sure if we were going to be able to pass Ferree or not. It would have been a real fun race. I’m kind of bummed out that it (Ferree’s Spin) happened. When it did happen I wasn’t sure if I was going to get caught up in it. We were real fortunate we had someone on our side tonight to help us through that one. That’s for sure.”

Defending champion,Brad Rouse, from St Catharines, Ontario made it two for two in the 20 lap Sportsman Feature, besting fellow Canadian, Adam Leslie in a reprise of last week. Rouse used the outside to take the lead from polesitter Leslie on a lap 3 restart and then held him off on a lap nine restart to record the victory. Kyle Inman, Austin Fugle, and Josh Wilcox rounded out the top five.
Rouse allowed, “Like we said last week, Adam’s tough and he’s quick. We got the outside groove working and the restart kind of helped us. Without a restart, I don’t know if I’d have caught him.”
Also, Billy Taylor, from Arcade, held off a determined trio of Andy Eastman, Bill Demick, and Joe Chamberlain to win the dandy 20 lap Street Stock Feature, while Chad Dickinson, from Batavia, made a late pass to beat defending champion Holden Heineman in the 20 lap Mini Stock Feature after runaway leader Bobby Dickinson broke on lap 10.
NOTES: Blair, who holds the track record, was the fast timer once again this night. The win was worth $2500, plus $300 for fast time……………………..The packed house, as witnessed by a 50/50 worth over $900,  was a testimony to the popularity of the Super Late Models, numbers of which have been declining in recent years, as have all the classes. The eighteen car field was in step with most tracks that run the class on a regular basis…………. The good news for Freedom fans is that the ULMS will make three more appearances there over the summer……………… Mod star Mike Maresca, who has taken comfortably to the Late Models scored an impressive double recently at Tri City when he won both the SLM and Big Block Features, not an easy thing to do.
Results:
ULMS Late Models: (30 laps) – 1. Max Blair, 2. Mike Maresca, 3. Doug Eck, 4. Dave Dubois, 5. Mikey Wonderling, 6.. Mike Smith, 7. Danny Kienitz, 8. Nathan Hill, 9. Jason Dobson, 10. Alex Ferree, 11. Greg Oakes, 12. Chris Hackett, 13. Andy Boozel, 14. Garrett Mott, 15. John Lobb, 16. Al Brewer, 17. Matt Lux, and 18. Eric Andrus. Heat winners were Blair, Maresca, and Lux.
Sportsman: (20 laps) – 1. Brad Rouse, 2. Adam Leslie, 3. Kyle Inman, 4. Austin Fugle, 5. Josh Wilcox, 6. Zach George, 7. Tim Schram, 8. Vince Fargnoli, 9. Cody Egner, and 10. Alan Bratek. Heat winners were Rouse and Fugle.
Street Stocks: (20 laps) – 1. Billy Taylor, 2. Andy Eastman, 3. Bill Demick, 4. Joe Chamberlain, 5. Ted Mascho, 6. Dennis Cummings, 7.. Ryan Allen, 8. Ron Richter, and 9. Dustin Skinner. Heat winners were Chamberlain and Mascho.
Mini Stocks: (20 laps) – 1. Chad Dickinson, 2. Holden Heineman, 3. Brad Shepard, 4. Bill Weller, 5. Matt Mowery, 6. Eric Weiss, 7. Tyler Richmond, 8. Bobby Dickinson, 9. Richard Kline, 10. Duane Powers, 11. Tom Childs, and 12. Dylan Strade, DNS: Dave Lowe, David Warrior, Tyler Oakes, and Albert Rhodes. Heat winners were Bobby Dickinson and Shepard.