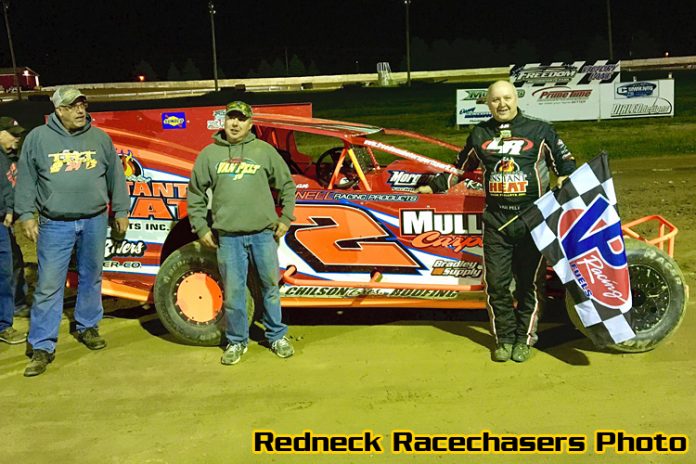 Matt Williamson started on the pole in the first Primetime Energy Services Outlaw Modified feature and would lead at the drop of the green. The only caution of the race flew on lap three as Jimmy Holden went up in smoke in turn one.

On the restart, it was Williamson and Billy Van Pelt on the front row. The duo would battle for the lead and were joined by Brad Rapp who inched ahead of Van Pelt on numerous occasions but could never clear the veteran.

While Williamson, Van Pelt and Rapp set sail, a three car battle for fourth developed between Dillon Groover, Phil Vigneri III and John Venuto. Groover and Vigneri III exchanged fourth on numerous occasions and Venuto was able to grab fifth from Vigneri III on lap nine. Vigneri returned the favor and took fifth back on lap 14.

Williamson, of St. Catherines, Ontario, was not to be headed as he led the remaining laps to capture his second Outlaw Modified win of the year over Van Pelt, Rapp, Groover and Vigneri III.

First Twin Twenty winner Williamson got to choose the starting lineup for the second feature and he drew the number eight as the invert for race number two.

John Venuto and Patrick Emerling led the Outlaw Modified field to green in the second twenty lapper and it was Venuto who blasted to the lead at the completion of lap one. Vigneri III was able to take second from Emerling on the next circuit and on lap three, Vigneri III took command.

Williamson joined Van Pelt and Vigneri III up front and the three drivers put on a tremendous show for the fans. Van Pelt, of Westfield, Pennsylvania, held on for his second win of the year while Williamson was able to wrestle the runner-up spot from Vigneri III with two laps ago. Following Van Pelt, Williamson and Vigneri III across the line were Groover and Rapp.

In the Dialed Designs DIRTcar Sportsman feature, Austyn Fugle hustled his way point followed by Ray Bliss and Alan Bratek. Bliss took control on lap four from Fugle while Brian Bellinger made it a super close, three way war for the top spot as they exited turn four the following lap.

While Bliss held the top spot, defending Track Champion Brad Rouse worked his way through the field. Rouse passed both Fugle and Bellinger in turn two on lap five and one lap later dispatched with leader Bliss.

Rouse started to open some breathing room from the field while Fugle, Bliss, Bellinger and Adam Leslie raced for the number two spot. Rouse, of St. Catherines, Ontario, extended his lead as the laps counted down in the caution free event and would remain undefeated in 2018 with his fourth win in a row. Fugle, Leslie, Bellinger and Bliss completed the top five

Dennis Cummings powered out front at the start of the Cummings Trucking Street Stock feature ahead of Bill Taylor, Curt Stebbins, Ted Mascho and Bill Demick. The only caution of the event flew just before lap two as Mascho got into the turn one wall. He would return after repairs.

Once the field was back under green, Cummings and Taylor proceeded to put on a tremendous side by side battle for the entire 15 lap feature distance. As the checkered flag unfurled, defending Champion Cummings, of Wellsville, was barely able to hold off the advances of two-time winner Taylor to capture his first win of the year. Stebbins, Demick and Joe Chamberlain completed the top five.

Matt Mowery and Chris Leone swapped the lead early on in the Danny Heineman & Sons Mini Stock main with Leone out front for good on lap three. Dante Mancuso wrestled second from Mowery on lap four and set his sights on leader Leone. Mancuso caught Leone one lap later and it was déjà vu all over again as for the second week in a row, Mancuso threw everything at the leader to try to grab the top spot.

Lap after lap, Leone and Mancuso raced door handle to door handle with Leone of Niagara Falls, taking down his first win of the year by the slimmest of margins. Holden Heineman, Mowery and Duane Powers completed the top five.

Notes: A special thanks to Ted Mascho Racing, as one lucky child won a bicycle during the intermission raffle. Mancuso Limousine and BDK Construction contributed extra dollars to the Mini Stocks as $400 went to winner Leone. Outlaw Modified drivers Van Pelt and Williamson have each now finished first or second in every feature event this year. Vigneri III kept his streak alive and has finished in the top five in every 2018 Outlaw Modified event.