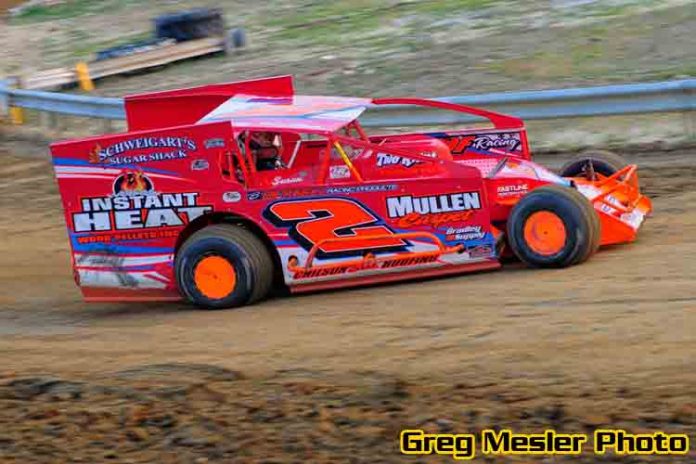 When the 25 lap Outlaw Modified Feature took the green, it appeared that the race was over after only a few laps, as Shayne Pierce bolted to the lead from the outside pole, opening a half straightaway lead by lap five. The advantage increased as the rest of the field battled for second. The principals were polesitter Jimmy Holden, Van Pelt, Phil Vigneri II, and pavement star Patrick Emerling, who took his first Modified checker in his heat and looked very comfortable in his dirt car.

The race took a dramatic turn on lap 15, as Pierce, leading by a straightaway suddenly rolled to a stop on the front chute. Holden and Van Pelt led the restart, with Van Pelt, whose main adversary this season, Mat Williamson was missing courtesy of a blown motor suffered on Tuesday, getting a tremendous jump, grabbing the top spot.and promptly driving away.

Holden held onto second and Vigneri third, while Emerling, who was actually gaining on Van Pelt earlier in the race before brushing the back stretch wall, battled to a fourth place finish in a damaged race car. Defending champion Adam Hilton completed the top five.


The veteran Van Pelt offered, “I was a lot lucky on that one. Shayne was going to win that race hands down. I was going to get third. I couldn’t get across the bottom quick enough. That restart was a blessing. I thought I could get by, if I could get beside Holden going into one I’d try to hold tight to the bottom and get it launched off there. I was praying.“

The Sportsman Feature saw a different winner as Brad Rouse’s winning streak came to an end, with Josh Wilcox, from Franklinville, wiring the field from the pole to score his first win. He had a little help, as Rouse started ninth and was forced to literally claw his way forward the entire race, which he did, finally claiming second on lap 19 of the 20 lap race. Rouse was steaming toward the lead when he ran out of time.

Wilcox offered, “It’s great. I had no clue what was going on behind me. I was just trying to hit my mark every time and I was actually getting pretty loose through the middle of three and four and I was worried they were going to start coming to me. I worked through lap traffic, and I knew if I could get some cars between me and them, I’d be in good shape.”

Two other divisions put on dazzling racing this night. In the Mini Stock Feature, defending track champion Brad Shepard, from Leroy, and Bobby Dickinson had the crowd holding its collective breaths as they swapped the lead in lap traffic before Shepard finally prevailed. The NY6A Mini Sprints had a similar scenario, with Eric Wise and Nick Groff providing the drama. Wise held the from the pole before Groff, who started seventh joined him at the front. The two then engaged in a scintillating high speed dice in lap traffic, with Wise, from Wayland, finally holding on for the win..