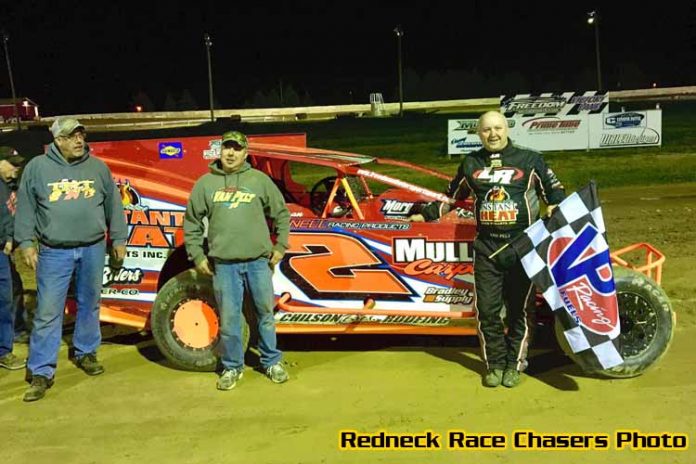 DELEVAN, NY – Chad Chevalier, from Pt Colborne, Ontario, prevailed handily over a strong field of Sportsman in the 40 lap “Fight for Freedom,” BEI Sportsman Series, while Billy Van Pelt, from Westfield, PA, continued his winning ways, notching his fourth win in the 25 lap Outlaw Modified event before a good turnout at Freedom Motorsports Park on Friday, July 6th. Thirty-seven Sportsman made the tow for the popular Bellinger Electric Series race, with Ransomville Speedway running a show-up points race at that facility this night, so a number of their regulars could travel to Freedom, with ten of them doing just that.

It took five heats and two consis to set the grid for the forty lap DEI race, with defending track champion and current point leader, Brad Rouse, vaulting into the lead from third on a lap one restart, followed by James Henry, a previous BEI winner, and Chevalier, who started fifth, leading the way. After claiming second on a lap two restart, Chevalier began hounding Rouse on a subsequent lap five restart, rocketing around the outside, while Rouse clung to his familiar spot on the bottom.

Chevalier, who has raced Rouse many times over the years in their native Canada, kept up the heat on the outside until slipping by for the lead on lap nine. From there, he immediately drove out to a comfortable lead, which grew to a straightaway as he danced through lap traffic, leaving the rest of the field to battle for the runner-up spot. That fight was highlighted by a spirited dice between Rouse and Dave Dipietro, which saw them swap the spot several times before Dipietro finally claimed it for good on lap 26.

Ransomville regular Brett Senek, up from 12th then moved in to challenge Rouse for third, grabbing that spot on lap 28. While this was going on Chevalier, a Humberstone regular and touring specialist, who won the ROC Sportsman Feature at Stateline the week before, cruised in front, dusting off lap cars with aplomb.

At the line, it was Chevalier, who has won before at Freedom, by a straightaway, followed by Dipietro, Senek, Kyle Inman, and Rouse the top five. Chevalier, who stayed on the gas throughout, offered, “I love racing here. I like driving it in deep in turn three. Then the car sticks and it really pulls off. That’s how I do all my passing. I didn’t know how big a lead I had. In lap traffic, you always think that someone is there so you try to move around the lappers as fast as you can.”


Van Pelt’s Modified win took some perseverance, but the veteran is used to that. Shayne Pierce took the early lead from the outside pole, but was joined by Van Pelt, who started fourth, on lap two. He then took the lead on a lap four restart and never looked back. If he had, he would have seen Phil Vigneri III and Pierce in a terrific battle for second.

The two traded the position in an entertaining struggle, with Vigneri ultimately claiming the spot. At the line, it was Van Pelt comfortably in front, followed by Vigneri, Pierce, Dylan Groover, and Tony Pangrazio to round out the top five.

On his pass for the lead, the always gracious Van Pelt, allowed, “I kind of felt there was a little more bite on the outside from the start and, to be honest with you, I didn’t want to give Shayne his preferred lane, and it worked for me. I figured he was the one who was going to win tonight. The cushion wasn’t as good as I thought it was going to be. It was still there, but you still had to be careful getting onto it.”

Byron DeWitt, from Pavilion, held sway over a light field of Street Stocks in their 15 lap Feature, with Billy Taylor, hounding him at the end. Bill Demick finished third.

Finally, Chris Leone, from Niagara Falls, recorded his second win in the 15 lap Mini Stock Feature, taking the lead from the outside pole from defending champion and polesitter Holden Heineman, and then rebuffing a challenge from Heineman in lap traffic midway through the race to score the victory. Heineman settled for second.