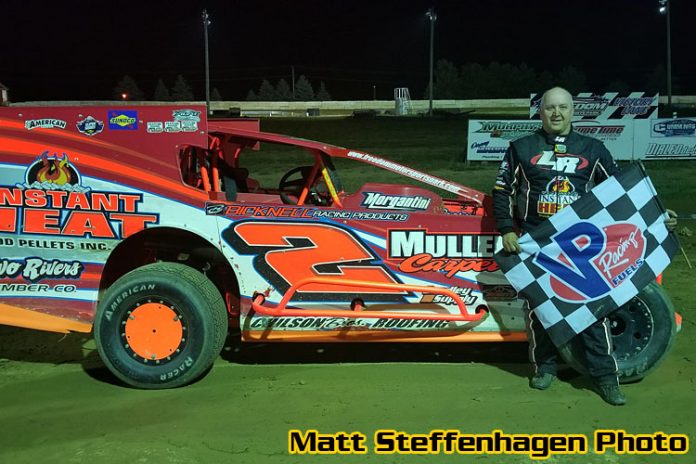 DELEVAN, NY – Billy Van Pelt of Westfield, Pennsylvania, capitalized on the extra laps available in the Primetime Energy Services Outlaw Modified feature and used a late race pass to take the checkered flag. The victory earned him $2500 and a guaranteed spot in the September Fulton Speedway Outlaw 200. Other winners on Instant Heat Wood Pellets Night were Kyle Inman in the Dialed Designs DIRTcar Sportsman, Dennis Cummings in the Cummings Trucking Street Stocks and Duane Powers in the Danny Heineman & Sons Mini Stocks.

Adam Hilton and Wally Wade shared the front row of the 40 lap Primetime Energy Services Outlaw Modified feature and at the drop of the green it was Hilton who took command followed by Shayne Pierce, Shannon Whaley, Phil Vigneri III and Wade. All eyes were on multi-time winner Van Pelt who joined the top five one lap later.

Immediately, a two car battle for the lead developed between Hilton and Pierce and a three car tussle was on for third between Vigneri III, Whaley and Van Pelt. Dillon Groover worked his way around Whaley for fifth on lap 13.

While Pierce hounded Hilton, Vigneri III and Van Pelt ran side by side for many laps with Van Pelt able to wrestle third from Vigneri on lap 15. Once Van Pelt cleared Vigneri III, he chased down the leaders and a furious three car war for the lead ensued.

Halfway found the top three of Hilton, Pierce and Van Pelt in tight formation up front with Hilton on the bottom, Pierce on the cushion and Van Pelt trying the three available lanes to get to the top spot.


The race of the year got the ten to go signal as inches separated the top three and Hilton did everything in his power to hold off Pierce and Van Pelt. On lap 31, Van Pelt got underneath Pierce in turn four to take over second but Pierce fought back to regain the runner-up spot. Five laps to go and Hilton continued to hold the lead but Van Pelt got a great run on the outside to finally grab the top spot on lap 36. Pierce brought out the caution one lap later as his fine run came to halt in turn one.

On the restart, Van Pelt held forth and crossed the stripe in front for his division leading fifth Outlaw Modified win of the year followed by Hilton, Vigneri III, Whaley and Andy Jankowiak.

First time visitor Dylan Davidson jumped from his pole position start to the lead in the Dialed Designs DIRTcar Sportsman with Alan Bratek, Ray Bliss, Kyle Inman and Brad Rouse in tow. Bliss eased past Bratek on lap two and looked for a way around leader Davidson. The much improved Bratek propelled back around Bliss on lap six.

Halfway in the 20 lap feature found major changes to the complexion of the race as Bratek got the advantage of Davidson and began to set sail while Rouse took third from Inman.
Disaster struck leader Bratek as he went around in turn four on unlucky lap 13. He was unable to return.

On the restart Davidson was under pressure from Rouse but it was Inman who went to the cushion and drove around both Davidson and Rouse to take the lead on 15. One lap later, Rouse took second but despite a late race caution, Inman of Darien held on for his first win of the year. Rouse finished in the second spot and a last turn last lap pass by Austyn Fugle netted him a podium finish. Davidson and Josh Wilcox completed the top five.

In the Cummings Trucking Street Stocks, a race long 15 lap door handle to door handle battle between Dennis Cummings and Bill Taylor wasn’t decided until the checkers fell and it was defending champion Cummings of Wellsville who squeezed out his second win of the season. Taylor, Joe Chamberlain, Patrick Nash and Bill Demick were second through fifth.

Duane Powers of Belfast led the field to green in the Danny Heineman & Sons Mini Stocks and was able to hold off point leader Matt Mowery and Holden Heineman throughout the 15 lap affair to take down his second win of the year. Mowery, Heineman, Rich Conte and David Warrior completed the top five.