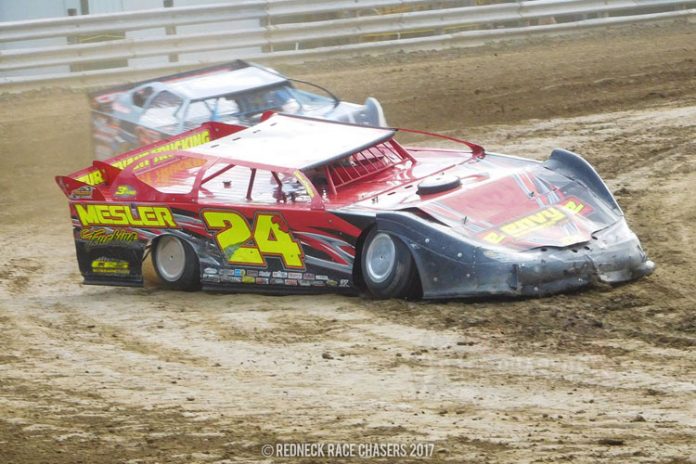 DELEVAN, NY – The Crate Late Models make their return to Freedom Motorsports Park on Friday July 27 in a special $1000 to win show on Mesler Trucking Night. They will join the Prime Time Energy Services Outlaw Modifieds and the Danny Heineman & Sons Plumbing Mini Stocks. The green flag is scheduled for 7:30 pm on Friday, July 27.

Located in Wellsville, Mesler Trucking is owned by Brad Mesler and provides timber hauling service in New York. Mesler is a long time campaigner in the Crate Late Models. He has won numerous features in the division at area tracks including victories at Freedom Motorsports Park. Give Mesler Trucking a call at 585- 610-6604 for all of your timber hauling jobs.

The Prime Time Energy Services Outlaw Modifieds have been dominated by Billy Van Pelt of Westfield, Pennsylvania. He has captured five of the seven events run so far at Freedom in 2018. Included in those victories was a rich $2500 to win event last week that also awarded him a guaranteed spot in the 33rd annual Fulton Outlaw 200 in September.

Despite Van Pelt’s success, second place point man Phil Vigneri III of Elba is still within striking distance due to finishing in the top five in all Outlaw Modified features this year. Defending track champion Adam Hilton of Newfane sits third, while Shayne Pierce of St Catharines, Ontario and John Venuto of Elba complete the top five. The second through fifth place point men have all had a shot at the checkered flag in 2018 and it is only a matter of time before they grace victory lane.


The point battle in the Danny Heineman & Sons Mini Stocks is tight as only 42 markers separate leader Matt Mowery of Olean from two time winner Duane Powers of Belfast and defending track champion Holden Heineman of Sardinia. Powers is the only one of this group to win a feature event.

Bring the family out for a great night of racing at the area’s fastest 1/3 mile clay oval. Grandstands open at 6:00 pm and racing starts at 7:30. Adult grandstand admission for this special event is only $15, $14 for Seniors, $7 for Students (9-15) and kids under 8 are admitted free.

Freedom Motorsports Park is located at 11099 Marble Springs Rd. in Delevan, N.Y., just south of Arcade. For information on 2017 season sponsorship opportunities, contact Bob Reis at freedommotorsportspark@yahoo.com or 716-725-5464. You may visit the speedway online at www.freedommotorsportspark.com or follow us on Facebook.