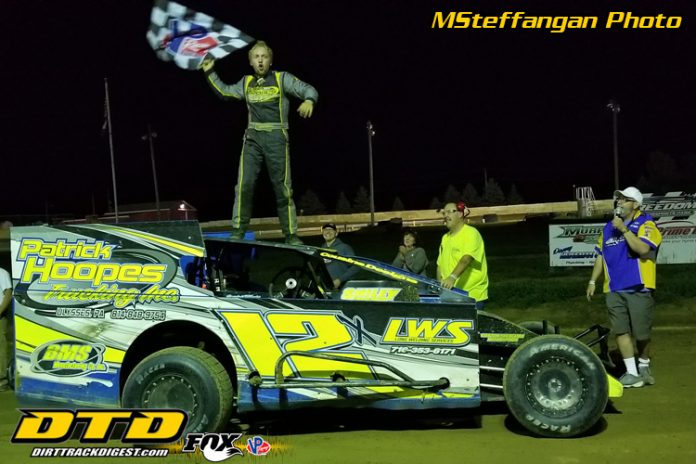 DELEVAN, NY- It was the final point night at Freedom Motorsports Park,, dubbed “King of the Hill,” with all titles to be decided. When it was all over, the performance of the night was turned in by young Dylan Groover, from Beaver Dam, PA, who took the measure of prohibitive favorite Billy Van Pelt in the 25 la Outlaw Modified Feature. Van Pelt, who had clinched the championship, but still drove like a man possessed, grabbed the lead on lap seven and the good crowd on hand sensed the inevitable victory for the veteran, who owns 19 championships at Woodhull. However, someone forgot to tell Groover, who has found Freedom to his liking.
A caution on lap 10 put the two side by side for the restart, with Van Pelt choosing the bottom. Groover got a great jump to take the lead and he essentially never looked back. Van Pelt stayed with him for a while, but Groover gradually extended his lead, which expanded to close to a straightaway at the checkers. John Venuto, Phil Vigneri III, and Shannon Whaley completed the top five in the abbreviated field.
In Victory Lane, Van Pelt was still shaking his head, declaring, “ I’m in total shock that Dylan got me on that restart. He went in there and did a nice corner. After that he not only beat me, he whipped my butt.. Hats off to them . They work really hard, just like our crew.”
For his part Groover, offered, “I can’t be more happy. Billy’s been coaching me along for the past five years. For the last three years I’ve been racing racing with him on the track. A few times I’ve been close to beating him.” On Van Pelt’s lane choice, considering the outside was faster, he added, “I was actually pretty surprised, but when you’re leading you have total control of the race and you can do what you want, but I was more than happy when the chose the bottom.”
The Sportsman Feature was supposed to be a coronation for Brad Rouse’s third straight championship and it certainly started that way, as Rouse took the early lead and drove away. However, on the eighth lap, Rouse suddenly stopped in turn four with a broken drive shaft, sending officials to recheck the points. It was discovered that, if Rouse finished last and Kyle Inman won the race, Inman would beat Rouse by a point.

Rouse did end up scored last, but Inman came up one position short, as Josh Wilcox, from Franklinville, scored his second Sportsman win of the season in dominating fashion, preserving Rouse’s title. Wilcox allowed, “When you see the best driver there break, you know everybody else has a chance. We were really good on the bottom right off the bat. Those guys were running the middle and the top and just left it open for me.”
Rouse, who almost lost the title on the final night last year under similar circumstances, breaking in the heat and then wrecking a backup car before pulling it out, confided, “Final nights are definitely not on our side, but we still won it. The car was real fast but we broke a drive shaft. It was good to see Josh win the race. He’s run good all year.” On the thd title, he added, “We came out real strong at the start of the year. We’ve been strong down home (Canada) the last month. We were hoping to carry it into tonight. It was just bad luck.”.
In other racing, Curt Stebbins, from Wellsville, wired the field in the Street Stock Feature, with Billy Taylor winning the title, despite being wrecked on the first lap, while Bill Weller, from Rochester, won his fourth straight King of the Hill in the Mini Stocks, with Duane Powers winning the title by finishing one spot ahead of runner-up Matt Mowery. The margin of victory was two points.
NOTES: As noted, a nice crowd was n hand in perfect weather for the finale……….The abbreviated field of cars could have been due to the holiday weekend and other racing in the region…………..The popular ULMS Super Late Models will be making their final appearance of the year at Freedom on Saturday, September 15th, in a double header with the Outlaw Mods. The Street Stocks and Mini Stocks will also be on the card.
…
Results:
Outlaw Modifieds: (25 laps) – 1. Dylan Groover, 2. Billy Van Pelt, 3. John Venuto, 4. Phil Vigneri III, 5. Shannon Whaley, 6. Tony Pangrazio, 7. Adam Hilton, and 8. Steve Schumacher. Heat winners were Van Pelt and Groover.
Sportsman: (20 laps) – 1. Josh Wilcox, 2. Kyle Inman, 3. Ray Bliss, 4. Tony Pangrazio, 5. Austin Fugle, 6. John ?Venuto, 7. Tim Schram, 8. Brian McKelvey, and 9. Brad Rouse. DQ: John Sekoll. Heat winners were Rouse and Inman.
Street Stocks: (20 laps) – 1. Curt Stebbins, 2. Joe Chamberlain, 3. Randy Taylor, 4. Ted Mascho, 5. Bill Demick, 6. Tim Bruce, 7. Dennis Cmmngs, 8. Dustin Goss, and 9. Billy Taylor. DNS: Andy Eastman. Heat winners were Stebbins and Cummings.
Mini Stocks: (15 laps) – 1. Bill Weller, 2.Holden Heineman, 3. Rich Conte, 4.. Duane Powers, 5. Matt Mowery, 6.. Elliot Arnold, 7. Dylan Stade, 8.. Albert Rhodes, 9. Brad Steffenhagen, 10.. David Warrier, 11. Dave Jackson, 12.. Chris Leone, 13. Eric Weiss, and 14. Brad Shepard. Heat winners were Weiss and Shepard.