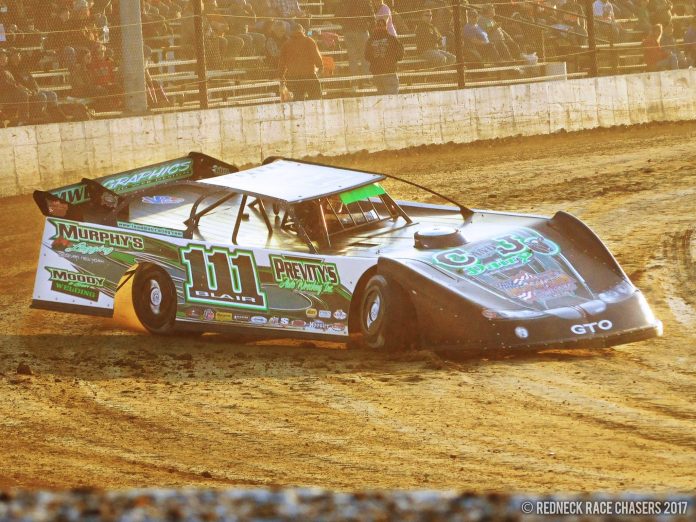 DELEVAN, NY – After saturated grounds and rain postponed the original race date, the new era of Freedom Motorsports Park got underway Friday night with the return of the Super Late Models as the headline division at the 1/3 mile clay oval.

Mike Wonderling took the lead at the start of the 25 lap Super Late Model feature, with Max Blair moving around Dave Scott to take second.  Blair made a wild move to thread the needle between Wonderling and a lapped car on lap 12 to take the lead, and from there Blair roared away to take the win.  Wonderling held off a closing Scott at the end for second, with Greg Oakes in fourth and Bryce Davis finishing off the top five.

Brad Rouse took the lead from Josh Wilcox on lap 2 of the 25-lap DIRTcar Sportsman Modified feature and kept a solid lead for the duration of the event to take the win.  Wilcox had to settle for second, while Kyle Inman overcame a restart penalty to charge back through the field for third.  Matt Steffenhagen was fourth and Sam Hoxie rounded out the top five.

The DIRTcar Sportsman Modified heat was won by Kyle Inman.

Curt Stebbins grabbed the lead on lap 3 of the 20 lap Street Stock feature and pulled out to a big lead while Dennis Cummings got by Randy Taylor on lap 7 to move into second.  Ted Mascho and Tom Kemp had a torrid battle for fourth and fifth through the middle stages of the race as the top 3 pulled away.  A caution on lap 19 reset the field for a one lap dash to the finish, with Stebbins holding on for the win by two car lengths over Cummings, Taylor, Mascho, and Kemp.

In the 15-lap Mini Stock feature, Brad Shepard, driving his daughter’s car, took the lead two laps in from DJ Williams and cruised home to the opening night win.  Matt Mowrey was able to wrestle second spot away from Williams in the closing laps, with Tyler Oakes and Eric Weiss completing the top five.

Dustin Skinner went wire-to-wire from the pole to win the 12 lap Bandit feature over Cody Atwater.

The Bandit heat was won by Dustin Skinner.

Next Friday night, it’s the 5th annual Ron Baker Memorial as the ULMS Super Late Model Series makes its first of three visits of the 2019 season, with the DIRTcar Sportsman Modifieds, Street Stocks, Mini Stocks, and Bandits also on the card.  Racing begins at 7:30 p.m.  For more information, visit www.freedommotorsportspark.com.