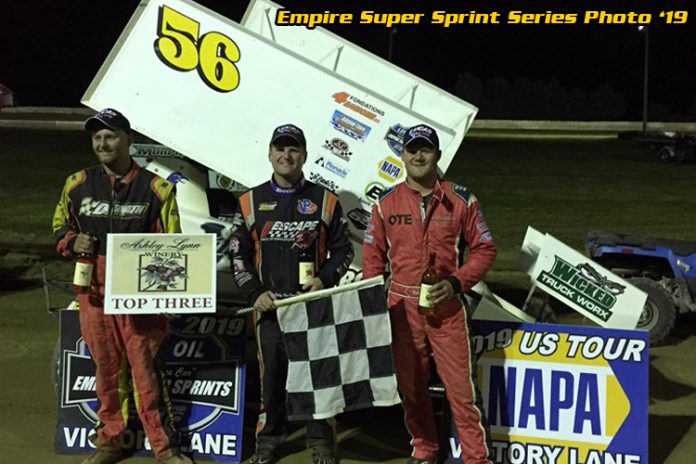 DELEVAN, NY – Friday night the Lucas Oil Empire Super Sprints invaded the Freedom Motorsports Park for the first time in nearly two decades with Billy VanInwegen taming the bull-ring for his second win of the 2019 season.

The three-eighth’s mile produced some intense racing throughout the NAPA Auto Parts / Mach 1 Chassis 25-lap A-Main, but VanInwegen proved he was up to the task while on his way to claiming the $2,060 winner’s prize.

“This has been a hell of a year all around,” commented VanInwegen. “Between our Modified stuff and the stuff Brad Radivoy gives me here with the Sprint Car, it’s unbelievable. We finally got some things clicking here. We had some good luck on our side.”

Sammy Reakes IV redrew the pole and got the drop on the field at the original start. He immediately went to cushion in turns one and two to the secure the top spot in the event with Brett Wright in tow.


Reakes quickly caught the back-side of the field as only six laps showed on the lap counter. Traffic was tough for Reakes as he was forced to use multiple lanes on the speedway. This caused the action at the front to intensify with Wright making his presence felt.

The pair crossed the line on lap nine side-by-side for lead. Reakes kept him at bay for the moment as he made the right moves through the slower traffic to keep Wright in check.

On lap 10 VanInwegen made it a three-car battle for the top position as he drove around Wright for second. The trio remained tightly packed together with each driver looking to gain an edge.

Wright seemed to have found the line when on lap 13 he dove to the bottom of turns three and four to go from third to first. Unfortunately that pass was negated. Before the lap could be officially scored the red flag came out for Brad Knab. Knab took a tumble in turn two but walked away unscathed.

“I needed that (red) to catch my breath and reset a little bit to think about what I was doing,” said VanInwegen. “It was getting a little hairy in traffic with sliders flying and all kinds of crazy stuff happening there.”

A double-file restart put VanInwegen next to Reakes for the green. VanInwegen won the drag race to the top of turns one and two allowing him to drive around Reakes to secure the top spot. Dylan Westbrook came with him on the outside as he moved to second on the same lap.

Now it was VanInwegen’s turn to fend off the attempts by Westbrook to get by him. Like Reakes earlier in the race, traffic quickly became a thorn in his side. Westbrook applied continuous pressure with VanInwegen holding strong at the front.

Lap 23 saw the final yellow as current points leader Paulie Colagiovanni got together with Kevin Carlson causing both drivers to come to a stop in turn three. The caution led to one final restart. VanInwegen chose the outside lane for the green and it was the right decision as got a good enough start to keep Westbrook behind him.

“Dylan is one of the best 360 drivers in the country,” mentioned VanInwegen. “I was sweating bullets and I’m still sweating bullets. I definitely didn’t want to see that caution come out. My hats off to him for running me clean there at the end. I’m glad we could take it to the house.”

Westbrook enjoyed the racing on the smaller Freedom Motorsports Park while also having an opportunity for the win. VanInwegen made the right choices for the final restart to force the Scotland, Ont., driver to settle for second.

“I was really hoping he would pick the inside, but good move on him not to,” cited Westbrook. “It was a great race. I’ve never been here before so to come here and have a good run like this was great. It was a real fun track, real racy. There was a top and bottom.”

Wright was all smiles after his third-place finish. The team has had some tough luck as of late so it was a good night for the Old Chatham, N.Y. driver, as he finished on the podium for the first time this season.

“My dad and I have been working really hard in the shop to try to get the car dialed in,” said Wright. “We’ve got close to a top five and then we have our bad weeks. Tonight turned out to be a good night. We’ll see if we can carry it into tomorrow.”

Jonathan Preston advanced from 11th to finish in fourth with Scott Holcomb getting by Jason Barney in the final laps to finish in fifth.