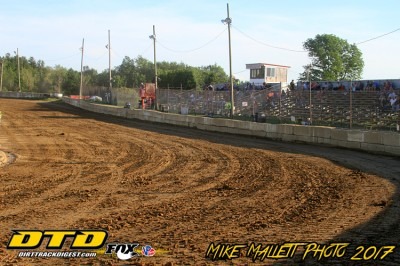 ARCADE, NY – Some new faces and some familiar ones graced Victory Lane on Bellinger Electric Night at Freedom Motorsports Park.

Bryce Davis and Wyatt Scott had a great battle at the start of the 25-lap Super Late Model feature, running side by side for the first few laps until Scott pulled away. Greg Oakes made a charge past Davis just past lap 10 and tried to run down Scott, but he held a five car length margin of victory to the checkered flag. Oakes and Davis took second and third, with Zach Wich nipping Cody Egner at the line for fourth spot.

The 25-lap DIRTcar Crate Sportsman race got underway with Dalton Martin leading Byron DeWitt up front. Sam Hoxie passed DeWitt for second, and DeWitt’s car had a rear end issue and he dropped out one lap later. Martin extended a lead over Hoxie to a full straight at the halfway point and cruised home with the feature win over Hoxie, Ray Bliss Jr, Michael McCary, and Mike Eastman.

In the 20-lap Pro Mod feature, Duane Powers outran Brodie Hill for the lead, but it only took Adam Ashcroft and Al Brewer a few laps to move past them into first and second.

Brewer passed Ashcroft for the lead at halfway. Brewer pulled a healthy lead, but made contact with the lapped car of Kory Lanni on lap 17 which sent him grinding on top of the inside guardrail, damaging the back end. Ashcroft inherited the lead and pulled away from Powers to take his first win of the year, followed by John Woodward Jr, Victor Earle Jr, and Justin Chaddock.

Ted Mascho took the early lead in the 20-lap Street Stock feature but lost the lead to Dennis Cummings out a lap 4 restart. Tom Kemp battled past Joe Chamberlin for second and snagged the lead from Cummings on lap 9. Bill Taylor, who pitted with a flat on lap 4, worked his way back to third and began to pressure the leaders. Over a hectic few laps, Kemp and Chamberlin battled, and Chamberlin finally got the lead coming to the white flag and held on for his first win of the season. Kemp was a close second, with Michael Oakes, Cummings, and Randy Taylor rounding out the top five after Bill Taylor broke on the final lap.

The 15-lap Prime Time Energy Services Mini Stock feature found Andy Schumaker coming from mid pack to the lead at the end of lap 1, and was dominating the race till a red on lap 14 for a fire on Trevor Putt’s car. That set up a one lap dash that put Holden Hineman on Schumaker’s back bumper, but Schumaker held on to take the win.

After an opening lap challenge from Bryson Hill, Ridge Cobb motored home with a win in the 12-lap Bandit feature event. Cody Atwater took advantage of a miscue from Hill to snag second on the final lap, which also moved Seth Johnson up to third.

Racing continues at Freedom Motorsports Park on Friday, June 25th with the ‘Bixby Hill Shootout’ presented by Sixt Lumber, will all of the regular divisions in action at 7:30 p.m. For more information, visit www.freedommotorsportspark.com .